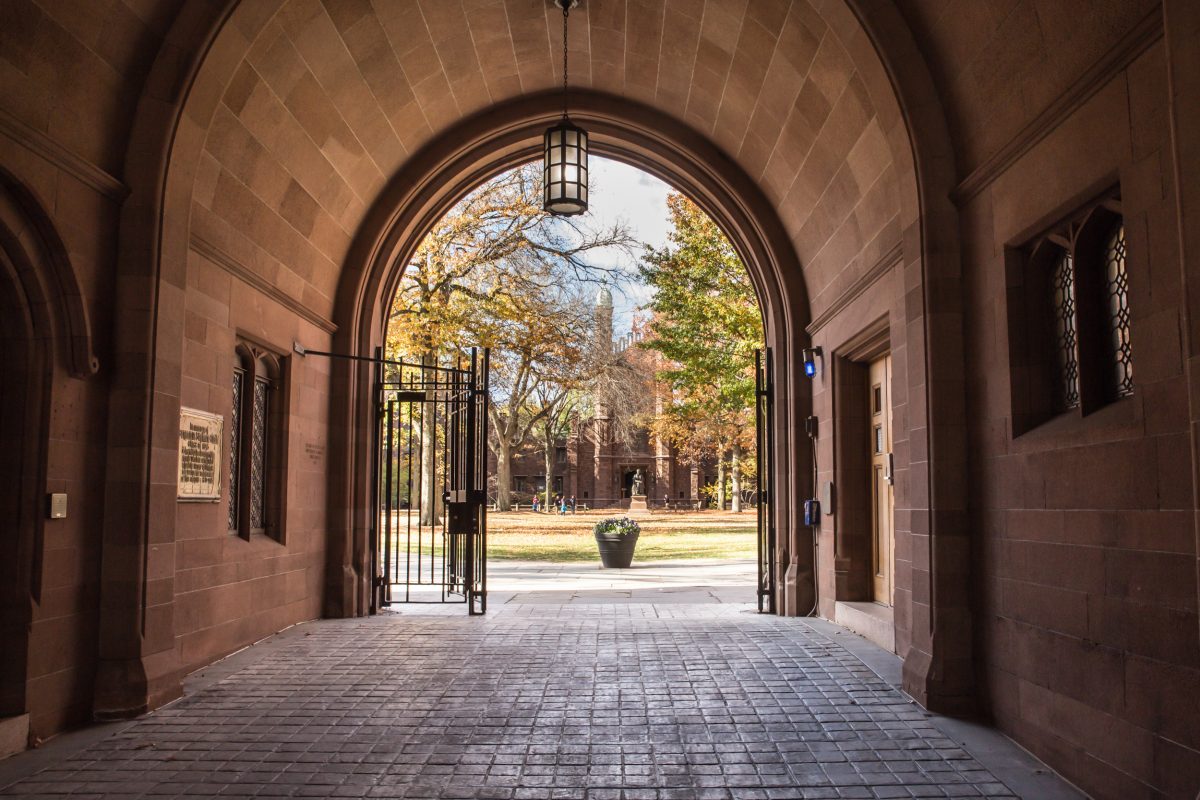 Let’s Be Reasonable: A Conservative Case for Liberal Education is indeed a reasonable book. Drawing on thinkers from John Locke to Allan Bloom, Ursinus College political theory professor Jonathan Marks cuts through the excesses of higher education commentary and makes a compelling case that the underlying problem at the heart of higher education‘s troubles is a crisis of purpose, one that it is unwilling to address or even acknowledge:

Unfortunately, from Harvard on down, the statements of purpose and principle that supposedly animate our colleges and universities may as well have been produced by Mad Libs. Adjectives, like integrative, interdisciplinary, interconnected, entrepreneurial, twenty-first century, complex, dynamic, and problem-solving, are distributed among brochures as if at random to make it appear that something buzzy is going on.

That array of weasel-words—part Madison Avenue and part academic market research, with a dash of carnival barker thrown in—is intended to veil and seduce, not inform.

Those whom higher education wishes to impress, including students, parents, the media, corporate partners, and legislators, are less interested in esoteric musings about developing the powers of reason than the promise of a brighter economic and political future. Excitement and future-speak sell more than calm thoughtfulness; the sales pitch has become the mission, for the true mission is not particularly marketable. As Marks notes:

Rather, we’re covering up our inability to state what the main aim of liberal education is by promising to tend to all aims and to be up to date, not to say cool.

Marks’ argument for restoring “reason” to its proper position at the center of higher education is the book’s great strength. In highly accessible language, he explains that higher education’s true purpose is (or, perhaps, ought to be),

to cultivate in our students an experience of and a taste for reflecting on fundamental questions, for following arguments where they lead, and for shaping their thoughts and actions in accordance with what they can learn from those activities.

Marks emphasizes the need to develop the mental faculty of judgment. We cannot rely on instruments such as the scientific method for making good judgments; there is no prescribed formula for making wise decisions—decision-making rests on the specific particulars of each case.

Much of life is lived outside the boundaries of empirical certainty and reasoning outside those boundaries is improved and informed by the liberal arts in a way that more mathematical approaches cannot do.

Nor is “genius” essential for judicious decision-making. As Marks explains (citing the psychologist Phillip Tetlock), “those with the most knowledge are often less reliable” at making predictions because “the person who acquires more knowledge develops an enhanced illusion of her skill.’” Furthermore, according to Marks, “the capacity to reason well is widely distributed,” and most people can benefit from “guidance” through the pantheon of important texts and ideas accumulated over the centuries to become more adept thinkers. 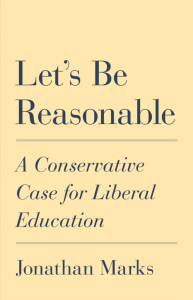 There is a secondary theme to the book that gives pause, however. Marks tries to defend the concept of liberal education from detractors both left and right. It is clear, however, that the real audience he is trying to reach is the conservative one. And, for a major part of his defense, he maintains that the American campus is still a reasonable place run by reasonable people. For conservative critics, he offers an observation that: “regardless of what you may have heard, our universities aren’t governed by balding radicals and their student disciples.”

This is a fair appraisal; although some top administrators have political agendas, most are motivated by the bottom line and their own career advancement. Some are even concerned with defending the sort of liberal education Marks heralds.

And Marks acknowledges that politics have indeed crept onto campus and stayed there: “But today, the student activists of the sixties are heroes to many, and even administrators, those squares, usually profess to view activism as a sign of health.” Again, a fair observation. Top administrators commonly pander to left-wing campus radicals in order to avoid controversies that might hurt their reputations or the school’s fundraising abilities. As a result, the influence of extremists far surpasses their actual number.

Even so, he does not consider the threat posed by politicization to be a dire one. He attributes the prevalent perception among conservatives that the culture war is red-hot, in part, to mere journalistic sensationalism:

Once more, this is a valid observation. Life on campus is not generally a white-knuckled roller-coaster ride hurtling from one outrageous incident to another. Many faculty, even in the humanities and social sciences, are still serious about providing a balanced, accurate educational experience to their students, and controversies intense enough to garner public attention are relatively rare.

This state of affairs and his own positive experiences in academia as a conservative professor have led Marks to express a hopeful attitude toward the future of academia:

I’m convinced then, that for defenders of liberal education, the present is not as bad a time as the shouting of culture warriors and the lectures of consultants might lead us to despairingly believe. Now, perhaps even more in other times, those who love reason and know its fragility can be persuaded and, in turn, persuade others that liberal education addresses a permanent need.

This is where Marks’s argument starts to lose its full power. Pinning hopes on “perhaps” people “can be persuaded” is not particularly reassuring for the future. To that, he offers a stronger mechanism for reform:

I agree with Jonathan Haidt and Greg Lukianoff, who think that “market forces” will reward universities that, recognizing many obstacles to rational inquiry and disagreement, establish conditions in which faculty and students can engage well in both.

Yet, are market forces enough to reverse academia’s current direction away from reason to political dogma and economic expediency? That is a doubtful assertion.

The massive influence of government money—from state appropriations to federal student aid to research funding—distorts the higher education market to the degree that natural forces no longer have the hoped-for corrective power.

Much depends on the true state of academia. Although Marks does not seem to think that the politicization of the academy has advanced beyond the point at which good ideas will still win, he also devotes considerable attention to just how extreme the academy has become. He cites the influential philosopher Richard Rorty, who finished his career at Stanford University; Rorty remarked that he was “mystified that any serious person objects to left-wing activism as an aim of higher education.”

So, it may be that higher education is not as healthy as Marks initially suggests, even according to his own evidence.

It is not enough to say the academy “should” emphasize liberal education and “should” promote reason when most indications suggest that it is moving in the opposition direction.

Certainly, the increasing frequency, intensity, and irrationality of the “shark attacks” over the past several decades suggest that academia does indeed have a growing shark problem. Empirical evidence reveals that higher education is extremely one-sided, especially in the humanities departments that should provide much of the intellectual content for the sort of liberal education Marks wants to restore. And the data shows that academia’s one-sidedness is rapidly increasing.

But, despite such developments and many more that indicate academia’s politicization problem is severe, Marks bases his argument on a claim that “many conservatives overestimate the extent and depth of the problem and consequently consider universities lost.”

Even granting him victory over those conservatives who are keen to “throw the baby out with the bath,” there is a vast middle ground between his own hopeful view and the view of those higher education critics who believe that the academy is no longer worth saving. Not all who find higher education’s leftward drift distressing are ready to give up, but they question whether polite means such as persuasion and market forces—which have been failing for some time—are sufficient to reform such a deeply troubled institution.

That middle ground is likely where most conservatives in America exist today (although Marks may be right that academic conservatives tend to be of his more moderate type). By focusing on the most extreme critics who have given up hope for restoring the academy, Marks fails to address the need to find a roadmap back to an academy in which reason reigns supreme.

It is not enough to say the academy “should” emphasize liberal education and “should” promote reason when most indications suggest that it is moving in the opposition direction. If it is not a place of reason now, then the people who have been in charge during its decline are not likely to reverse course and make it so.

But, even if one disagrees with Marks’s handling of the “middle ground” of conservatives, Let’s Be Reasonable has much to offer even those who doubt whether the academy can be reformed. He adds a perspective that is not always heard among the angry shouts on extremists and the happy talk of educratic pitchmen; sometimes higher education’s conservative critics need to be reminded that there is still valuable education occurring despite episodes of outrage and a continual leftward drift.

And everybody needs to be exposed to his ideas on higher education’s ultimate purpose.