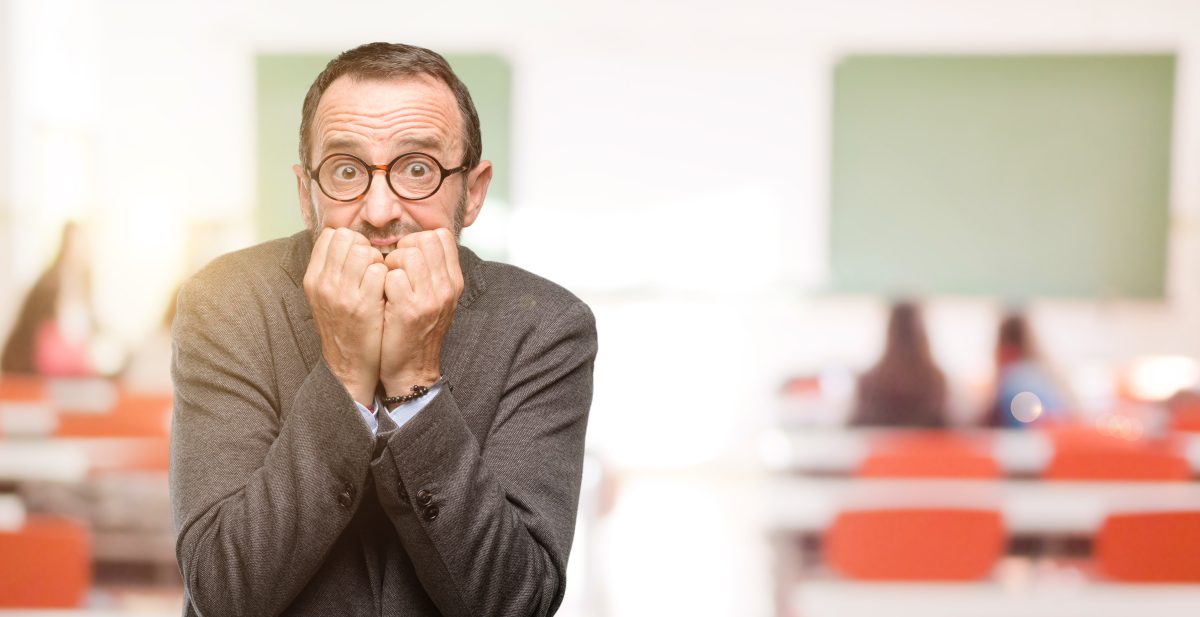 One of the stories in my new book, The Dumbest Generation Grows Up: From Stupefied Youth to Dangerous Adults is that of the changed status of undergraduates and professors. They don’t relate to one another the way they used to. If you wandered the hallways at State U in 1980, you’d sense an ordinary relationship of students and teachers, one side in charge, the other obedient (whether because of fear, custom, or sincere respect—it would vary). Do it today, and you get a whole other feel. Let me explain.

Around 2011, I joined a panel at University of Minnesota on student habits in the Digital Age. Another book, The Dumbest Generation: How the Digital Age Stupefies Young Americans and Jeopardizes Our Future; Or, Don’t Trust Anyone under 30 had come out awhile before, and many deans and provosts had tendered invitations to speak. Two other professors spoke as well, with 150 students and profs in the audience.

I did my thing, berating undergrads for meager homework hours, fewer books in leisure time, and phones in hand like Linus and his blanket. I felt comfortable scolding them because my host had told me during a morning walk that he, too, saw flagging labor and phone addiction among them. It was a glum crowd when I finished, but not for long. The professors took their turns and reversed the argument. No, they said, students weren’t screen-addled and academically lazy. They were bright, independent minds, young adults meeting the world. One had a hurt tone in his voice, as if he were defending innocents from unjust accusations. The students brightened up, the profs did their job.

It’s an attitude I encountered throughout the Teens as I spoke at some 50 campuses. At Berkeley, a provost told me, survey data showed a worrisome drop in homework hours on campus and he encouraged me to tell the truth. That led to another lecture with a grumbling Q & A. In a follow-up forum, I learned, a distinguished professor did the same thing as the profs did at Minnesota, emphasizing my negatives and the kids’ positives. I was the grouch, the reactionary; the profs were mentors, guides, softly paternalistic inspirers of the young. They didn’t want an elder to knock the kids. You wouldn’t hear them criticize hip-hop and Marvel movies, as I do at the bare mention of them. The kids are all right!

Let’s jump forward to 2022 and check the attitude. I presume you’ve seen the attitude in action many times, from the student advocate who believes that “great teachers engineer learning experiences that maneuver the students into the driver’s seat and then the teachers get out of the way,” to the education professor who demands that general education requirements be scrapped. Ten years later, let’s ask: what is the result of professors stepping off the podium? How have the indulgence and forbearance and admiration worked out?

Not so well. The professors still sympathize with the young, and they don’t like grumps to trash Instagram. They won’t insist on more book reading and more pages assigned for homework. But the relationship between teacher and student has changed, and not in a happier direction.

The teachers believed that telling 19-year-olds about rampant systemic racism would boost their status as truth-tellers, but the kids took the message and included the messengers in the guilt.

There is fear in the air. Classrooms and forums have lost their free-wheeling forensic. Professors are scared of the very youths they pledged to protect and enable. They no longer look at students as budding adults eager to learn. Instead, they see danger, and many episodes prove it.

They watched the girl at Yale shrieking at Professor Christakis. They heard about Penn law professor Amy Wax vilified by students and punished by the dean because she stated a politically-incorrect fact about the poor performance of affirmative action students. They noted that some Lists of Demands issued following the 2015 University of Missouri protests included forms of surveillance in the classroom that were chilling.

At Emory, for instance, the list included the demand that two questions be added to student evaluation forms: one, “Has this professor made any microaggressions towards you on account of your race, ethnicity, gender, sexual orientation, language, and/or other identity?”; and two, “Do you think that this professor fit into the vision of Emory University being a community of care for individuals of all racial, gender, ability, and class identities?”

Emory rejected those questions, but the cases had an effect. Professors follow the drift of norms and practices at their schools, and they have a radar that picks up which people have moral authority and which identities bear collective guilt. The climate has changed, and profs can no longer play the protective role.

I have seen the anxiety in their eyes. They have to watch out for themselves, and it is the students who might take them down. They used to seek areas of controversy as if such seeking were a professional responsibility, the duty of “relevance.” Now, they avoid those areas as they would thin ice. They think twice about assigning books they’ve assigned for years, such as Huck Finn. They track the lexicon of correctness closely, which says that last year’s terms may get them in trouble this year. They’re wary of pronouns. Ever and always, they fear a complaint, especially one from a student of color. Even if they survive, the misery isn’t worth it.

What they don’t know—or won’t admit—is that they have brought this upon themselves.

The whole story is ironic. The indulgent attitude that they thought would ensure respect has had the opposite effect. The teachers believed that telling 19-year-olds about rampant systemic racism would boost their status as truth-tellers, but the kids took the message and included the messengers in the guilt. After all, professors worked in those institutions and profited nicely from its (putatively) unjust practices. You’re racist, too! The profs outlined to sophomores America’s imperialist past and didn’t expect the sophomores to add, “Hey, that’s your America,” but that’s exactly what they did.

When students dropped books and dove into screens, and the teachers said nothing, the students concluded that the professors didn’t stand firmly for the academic values the kids were told during recruitment and orientation time that the profs would uphold with fervor and integrity. Why respect these empty figures?

It amounted to a steady denial of their own authority. The students stopped fearing and admiring the professors because the professors presented nothing to fear or admire. On the contrary, the professors gave them much to despise.

Whether they like it or not, in the eyes of undergraduates, teachers represent the past. They stand for the materials found on the syllabus. The professors may wish to distinguish themselves from Dead White Male authors and their politically-incorrect opinions, and they may indict America for Vietnam and Wounded Knee, but the students can’t help implicating the teachers in those sins. To them, the professors are just the latest beneficiaries of a bad Establishment. A teacher who points out the badness isn’t spared from censure. He’s still a man of power and privilege.

This judgment may be true only for social justice warriors in the student body, but that motivated minority has power. If they make up only three in a class of 30, their complaint to the administration of a professor’s bias outweighs the non-complaints of the other 27. The atmosphere of the campus gives them automatic credibility—and they know it.

They denounce their institutions and their education without dividing good teachers from bad ones.  As one of them, a student at super-liberal Oberlin, made clear to a journalist from The New Yorker, “the past few years have been about ‘unlearning’ most of what she had been taught.”

Yes, to these fired-up young Americans, the professors are the professors, conduits of the past and accreditors of the present (they give grades!). Their involvement in the workings of power is inescapable. They embody the realities of the time (excluding, of course, the youth culture the students bring to campus with them). When they trash Western Civilization, they trash themselves. When they judge America for its sins, they judge themselves.

The old rule of generation obtains: youngsters hold elders responsible for the world they have inherited. “You are not us,” they exclaim. Few teachers can avoid this responsibility, not even the ones who set out to convince everyone of their noble awareness of all that was and is wrong in the world. Herbert Marcuse himself ended up at odds with the very student radicals he had inspired (this is another story I tell in the book).

So here we are, with an upside-down hierarchy. My liberal colleagues aren’t happy about it, they grumble in private, but they won’t speak out. They have no plans to change their pedagogy, either, no return to teacher-as-sage, no restoration of Western Civ. When some students at Stanford a few years back pushed a new Western Culture requirement, activists among the undergrads went nuts, crybullying their pain, threatening the advocates, and bemoaning the presence of abominable white supremacy in the ranks—and barely any professors objected to the tactics. The professors professing free speech and pluralism such as those members of Heterodox Academy are too few to overcome the general timidity.

Besides, the faculty created this problem, and they won’t alter their behavior and risk their reputations. They’ve made their bed, and they’ll tolerate the lumps and bugs until retirement.

Mark Bauerlein is Emeritus Professor of English at Emory University and an editor at First Things magazine.  He served as Director of Research and Analysis at the National Endowment for the Arts (2003-05). His commentaries and reviews have appeared in New York Times, Washington Post, Atlanta Journal-Constitution, Atlanta Magazine, Chronicle of Higher Education, www.cnn.com, and many other national periodicals.  His more than 400 interviews have included spots on CBS News, NPR, CNN, Fox News, ABC’s Nightline, and 20/20.  His books include Literary Criticism: An Autopsy (1997), The Dumbest Generation: How the Digital Age Stupefies Young Americans and Jeopardizes Our Future (2008), Negrophobia: A Race Riot in Atlanta, 1906 (2001), and his new book The Dumbest Generation Grows Up: From Stupefied Youth to Dangerous Adults. He lives in Washington, DC.