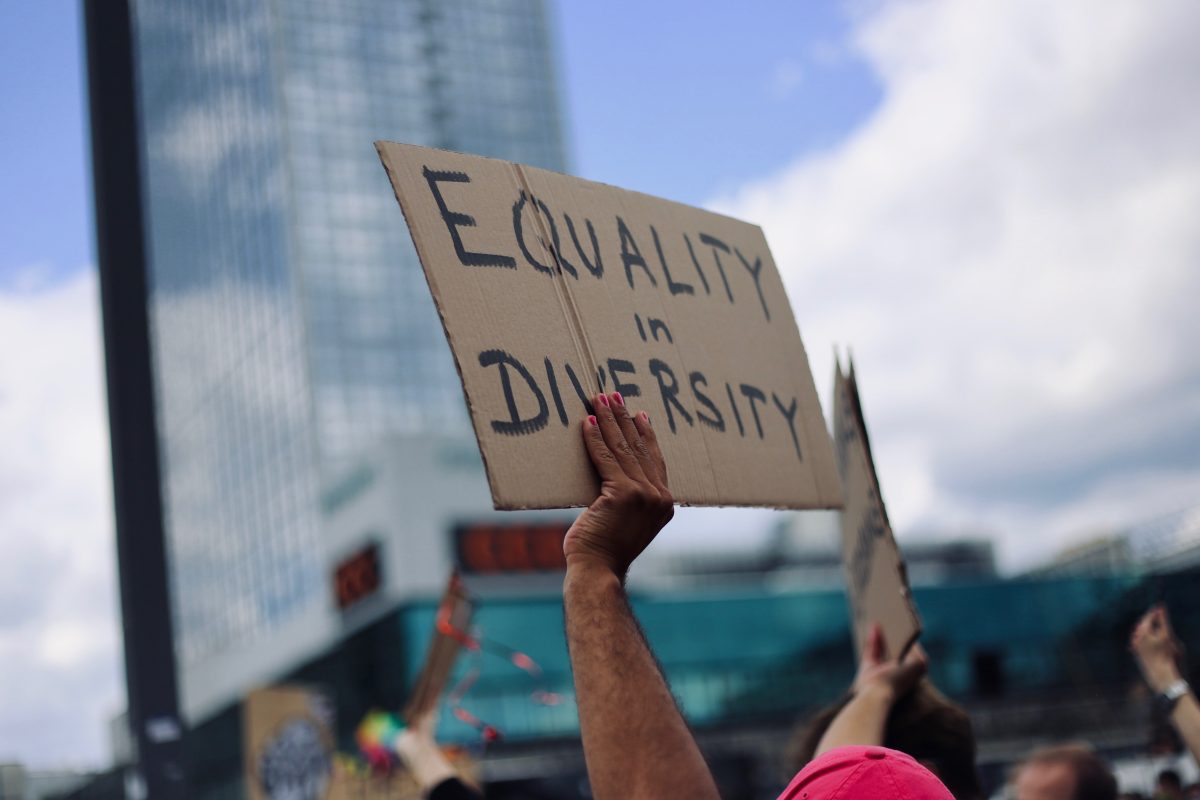 Editor’s note: This article is part of a series on compensation in the UNC System. The other four entries can be read here, here, here, and here.

Colleges and universities nationwide are quickly adopting Diversity, Equity, and Inclusion (DEI) ideologies, and the UNC System is no exception. In recent years, this has led to DEI-inspired task forces, departments, and hirings, and DEI has become embedded in all 16 of the schools’ strategic plans.

For readers who are unfamiliar with the flaws of DEI ideology, the Martin Center’s recent report on Critical Social Justice is useful reading:

[Critical Social Justice] begins with criticism or critical analysis, where activists unmask the supposed hidden realities of the world. America seems to be a place of equal opportunity or fair admissions, but through this critical lens, it is viewed as various structures of oppression built by the privileged to keep victim groups weak and unequal […] Diversity, equity, and inclusion (DEI) is the mechanism whereby CSJ is applied to institutions like universities. DEI is CSJ made more palatable using sweet-sounding civic language, but they represent the same critical analysis and remedy.

According to data shared in the same report, DEI, more than a simple way of thinking or a mere teaching material, has become a budget line item, as most UNC-System schools now have DEI-specific staff as well as departments. In total, 14 of the 16 schools have staff who specifically promote DEI, resulting in over $11 million going towards DEI staff salaries within the UNC System.

The table below shows the number of DEI administrators per UNC-System school, as well as the total salary amount dedicated to DEI staff per school. 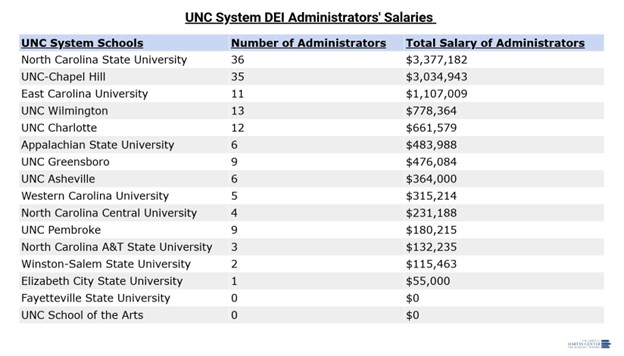 Surprisingly, two schools have yet to dedicate specific staff to DEI: Fayetteville State University and UNC School of the Arts. However, it’s likely just a matter of time before both schools begin setting aside funding for DEI administrators. In fact, UNCSA has plans to hire a chief diversity officer in the near future.

At present, North Carolina State University, with their 36 DEI administrators, and UNC-Chapel Hill, with 35, top the list, spending over $3 million each on DEI administrator salaries. ECU isn’t far behind with 11 administrators and over $1 million in salaries. As the table indicates, the remainder of the UNC-System schools have dedicated varying amounts to DEI administrative salaries.

The UNC System has already seen the ramifications of not “complying” with these initiatives in the case of UNC-Chapel Hill’s Hussman School of Journalism. Appearance of noncompliance at that School has resulted in its accreditation being downgraded and (perhaps in an effort to overcorrect) the hiring of a DEI guru as the School’s new dean. Basically, if an institution appears not to be in line, then there are agencies above it that can force its hand.

The Heritage Foundation’s study also found that students have seen little benefit from the presence of DEI administrators on campus. It seems that, when put into action, these DEI offices do not seem to have much positive influence on students’ experiences or exposure to actual diversity on campus.

Regardless, the push for DEI continues, ultimately resulting in DEI-specific administrative bloat. Once again, it seems that colleges and universities have skewed their priorities. Higher education should be a place of learning and sharing ideas, as well as engaging in new and possibly uncomfortable conversations in an effort to gain further understanding. By continuing to push a DEI narrative, the UNC System is likely causing more harm than good—not only for their budget but for their students and faculty.