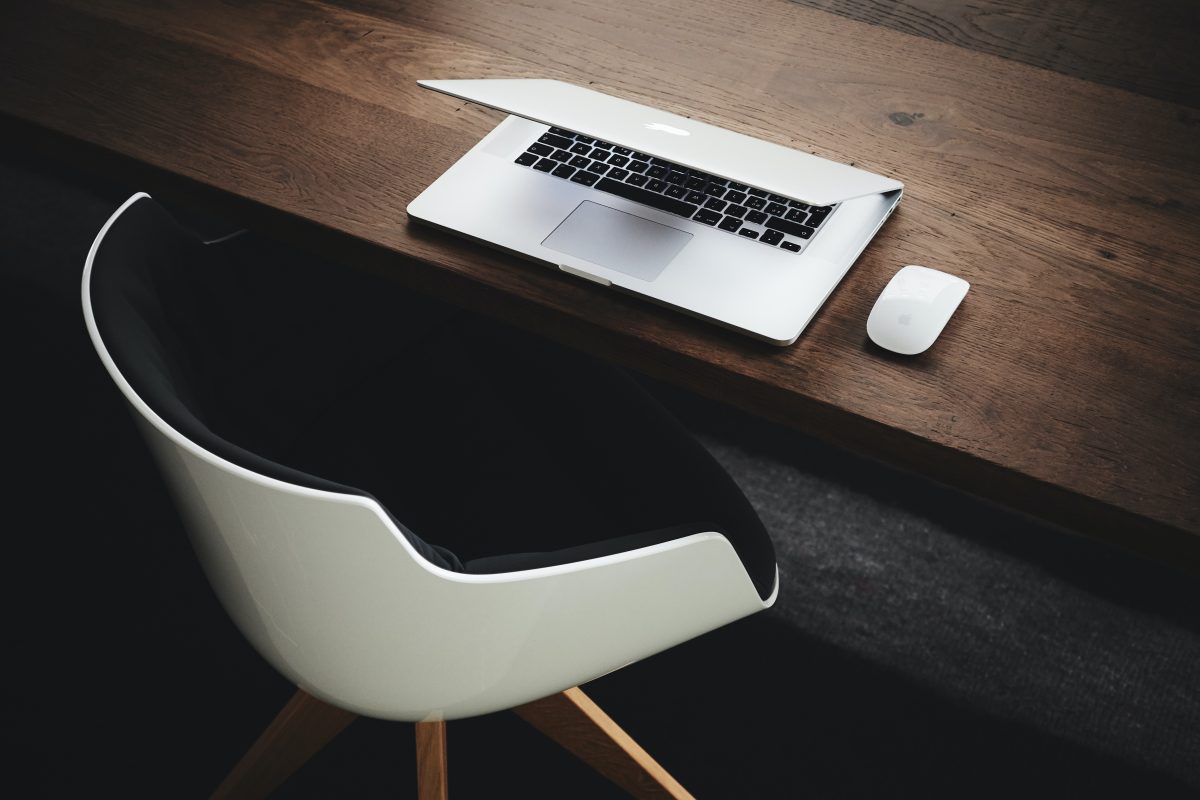 Editor’s note: This article is part of a series on compensation in the UNC System. The other four entries can be read here, here, here, and here.

As previously mentioned in this series, college sports are a big business. Businesses need managers, and, as such, colleges and universities have athletic directors.

Within the UNC System, 15 of 16 schools have athletic departments and, thus, athletic directors. Below are the names of these state employees, as well as their salaries and their schools’ NCAA divisions. As with previous data taken from the UNC System’s salary database, these figures represent base-pay salaries, not including benefits and other perks. 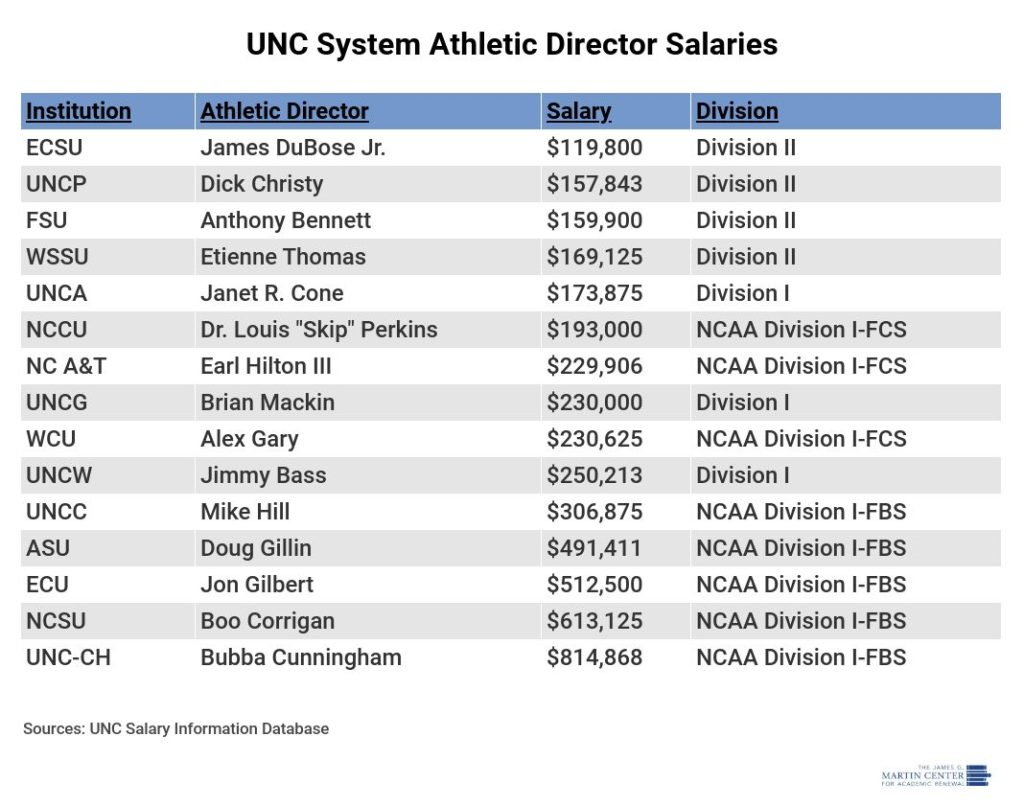 Unsurprisingly, UNC-Chapel Hill and North Carolina State University make up the top two where athletic director salaries are concerned. Bubba Cunningham at UNC-Chapel Hill makes a base salary of $814,868, while Boo Corrigan at NCSU makes $613,125.

As was the case in our story on coaches’ salaries, the base pay for athletic directors appears to tell only part of the story. According to AthleticDirectorU’s database, as of the 2020-21 season, both UNC-Chapel Hill’s and NCSU’s athletic directors made seven figures when taking into account total pay. The database lists Bubba Cunningham’s total pay as $1,007,844 and Boo Corrigan’s as $1,050,000.

Both UNC-Chapel Hill’s and NCSU’s athletic directors made seven figures when taking into account total pay.Additionally, much like coaches, athletic directors often have “buyout” figures included in their contracts. AthleticDirectorU shows a $0 amount for Chapel Hill’s AD, Cunningham, but a much larger number— $1,268,750—for NCSU’s AD, Corrigan.

The other UNC System schools pay a varying range. In general, it appears that schools with larger athletic departments (and, therefore, larger budgets) are able to dedicate more resources to their respective athletic directors’ salaries. There also appears to be some correlation between division status and salary, at least for the NCAA Division I Football Bowl Subdivision (FBS), as the five UNC System schools within that category have the top-five highest paid athletic directors. However, this does not entirely trend with the other division statuses.

When compared to other schools outside of the UNC System, UNC-Chapel Hill’s and NCSU’s AD salaries look fairly conservative. The highest salary in AthleticDirectorU’s database (belonging to Texas’s Chris Del Conte) is $2,370,000, with a buyout of $13,577,600. However, let’s stay in the UNC System and make a different comparison.

When looking at the athletic director’s role as the manager of the athletics department, the most comparable position within colleges and universities is probably that of dean. Much like athletic directors, deans are sure to wear many hats in their departments. In general, deans are responsible for managing departmental hiring, maintaining faculty and staff, managing student affairs, and a myriad of other tasks specific to their schools.

In order to give some perspective to athletic directors’ salaries, let’s compare their pay to the average salary of deans at each respective school. 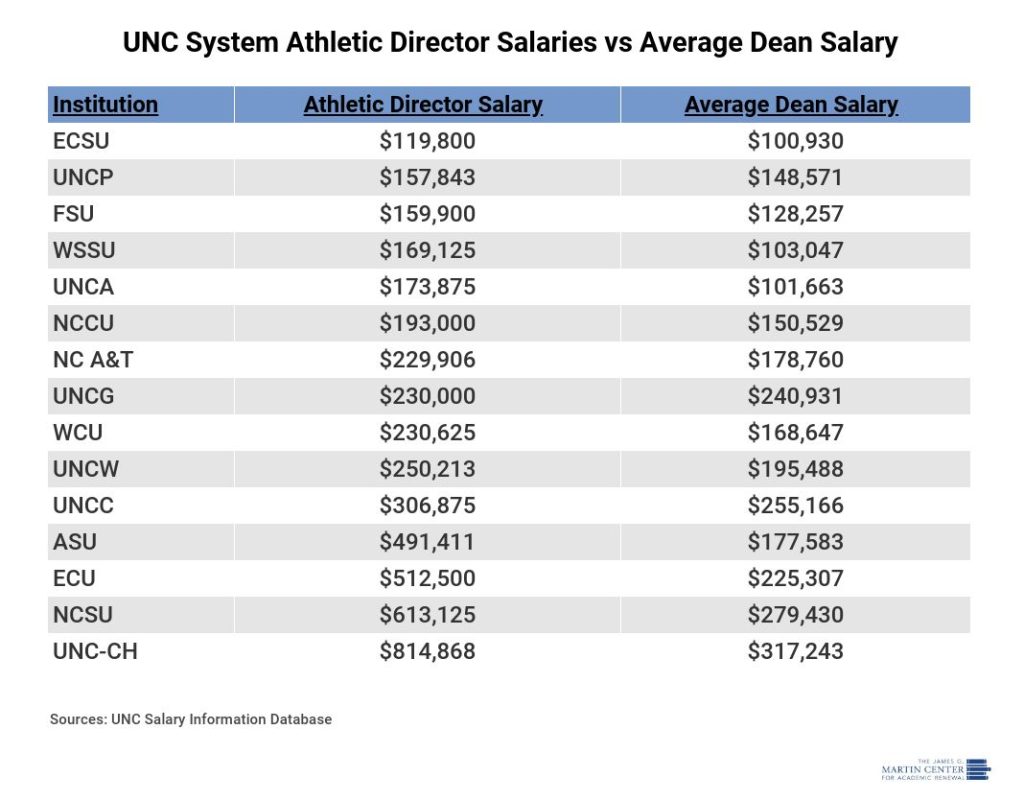 The average dean salaries listed here are from the UNC System salary database and are current as of June 30th, 2022.

Since we’ve now determined that athletic directors and deans have similar roles within their departments, one would expect their salaries to be at least somewhat similar, and certainly not as drastically different as the nearly 500k variance seen between the UNC-Chapel Hill athletic director’s salary and that of the average dean.

UNC-Greensboro is the only school that shows an average dean’s salary that is larger than that of the athletic director. Additionally, quite a few schools have a much smaller variance between the two, including Elizabeth City State University and the University of North Carolina-Pembroke.

The differences in salaries between athletic directors and deans is disappointing in some cases but not entirely surprising. Athletics are often given a seat of honor and seen as increasingly important, not only to the atmosphere of schools (think school spirit) but to their budgets. In addition, it can be difficult for many people to separate a college or university from its sports teams, since sporting events are often integral to the college experience. Many alumni continue to attend or support sporting events well after graduating.

Still, the world of higher education is exactly that: one of education and academics, not athletics. So shouldn’t athletics play second fiddle instead?

Due in part to the financial impact of the COVID-19 pandemic, many schools have had to make adjustments to their budgets. This creates an opportunity, as B. David Ridpath put it in a previous Martin Center article, to “reset college athletics as a better part of higher education rather than a profit-driven machine with little concern for educational primacy.”

Ridpath continues, “Now is a time for college sports programs to recalibrate financially and reassess their place in higher education post-COVID-19.” Yet, while the COVID-19 pandemic did present a good opportunity for athletic departments to reassess, keeping budgets and priorities in check can take place at any time.

The UNC System should keep in mind the purpose of their institutions: providing a high-quality education. In keeping with that purpose, perhaps there is room to reassess the emphasis placed on athletics, as well as the (typically) large budgets allocated to athletics departments.