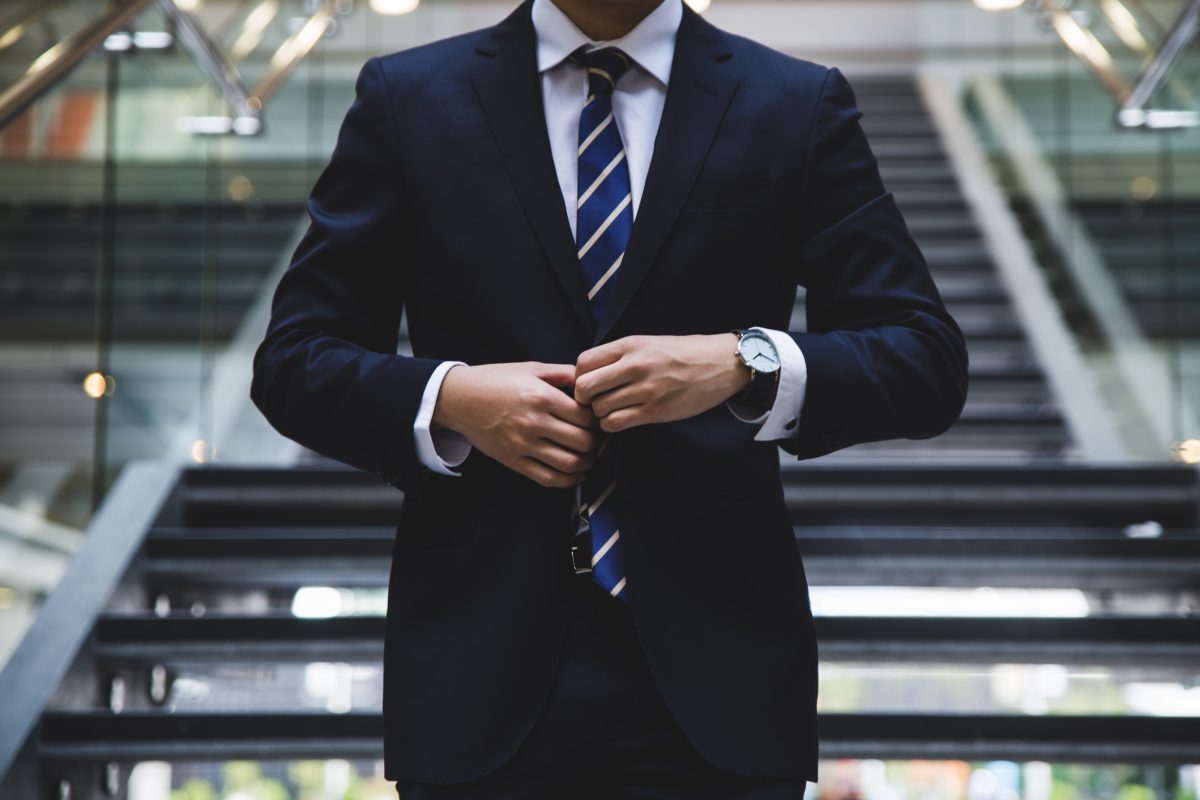 Chancellor salaries at public universities across the country are far higher than those for other public executives, out of step with faculty compensation, and unrelated to student success and university performance. A new program at UNC may help to address some of these concerns.

In an article in Forbes, the economic historian Richard Vedder states that “America historically has been a meritocracy, and the pay of workers has usually been pretty closely associated with what they add to the national output.” Vedder goes on to explain, however, that there is usually no such association where chancellors’ salaries are concerned, as no clear “bottom line” is used to judge them.

Given that there are numerous measures for determining institutional health and prestige, one would assume that presidents’ and chancellors’ salaries would be closely correlated to schools’ “success.” Vedder shows that this is usually not the case. At the time of his article’s publication, Forbes ranked the University of California, Berkeley, as the best school in America, yet 16 competing presidents, some at significantly lower-rated schools, made a larger salary than the University of California’s head.

Moreover, chancellor salaries are often out of alignment with faculty salaries. The UNC System’s 2021-2023 Budget Priorities document lists “faculty and staff salaries” as one of its top four priorities. Nevertheless, until the most recent budget, “UNC System employees [had] not received a salary increase in two years and [had] not received an increase equivalent to that of other state agencies in three years.”

According to data presented below, it would appear that the UNC System’s chancellors have been exempt from any salary-related belt-tightening. Since a major theme in the system’s budget priorities is efficiency, perhaps there is room to increase it by reducing waste and bloat where chancellors’ salaries are concerned.

The following are data from the UNC System Salary Information Database, which shares current salary information as of March 31, 2022: 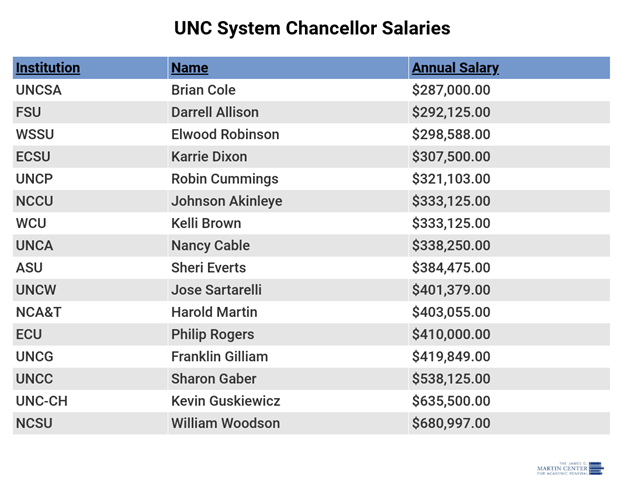 As these data show, the highest-paid UNC System chancellor is North Carolina State University’s Randy Woodson, whose yearly base salary is $680k, excluding benefits and bonuses. According to The Chronicle of Higher Education, Chancellor Woodson’s total pay in 2020 was $834k, a figure that includes base pay, bonuses, and benefits. Perhaps the most interesting line in CHE’s data is the “ratio of [a chancellor’s] total compensation to faculty salary,” which shows that Chancellor Woodson is compensated at a 7:1 ratio with the average faculty member ($128k). This means, of course, that NCSU’s chancellor makes the equivalent of seven professors combined.

Does Woodson make too much money? Do the other UNC System chancellors? In the past, there were very few metrics available for Board members to use when evaluating such a question. Comparisons with other roughly similar universities (below) may or may not be useful. In fact, such comparisons could be a leading cause of industry-wide bloat and the ongoing arms race in university executive compensation. 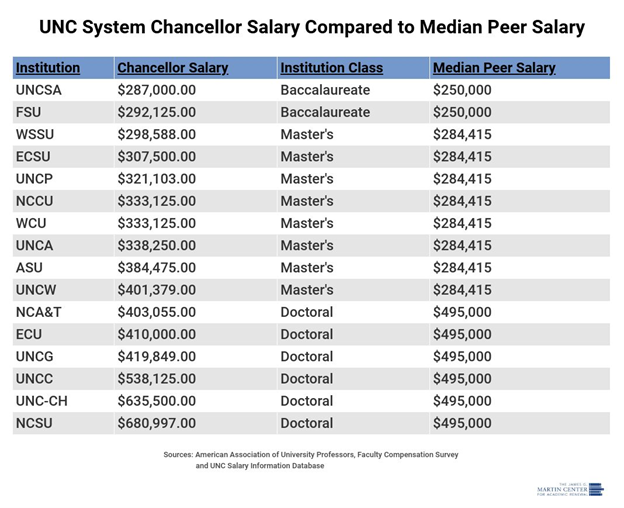 Aligning chancellor pay with university performance will likely be a promising step toward improving outcomes across the system.Happily, going forward, the UNC System will have new tools available when determining chancellor compensation. In September 2021, UNC established an incentive compensation program for all university chancellors. This follows the creation of a similar program for determining compensation for the president of the UNC System, which was created in 2020. Chancellors will first be eligible to receive incentive-based rewards later this year.

As with any performance-based program, the devil is in the details, which have not yet been published. But aligning chancellor pay with university performance will likely be a promising step toward improving outcomes across the system.

When it comes to achieving goals of system-wide efficiency and the reduction of institutional waste, chancellor’s salaries should not be exempt from consideration.

Ashlynn Warta is the state reporter for the James G. Martin Center for Academic Renewal. This article is the first in a series on compensation in the UNC System.

Did You Know? COVID-19 Relief Funds and Campus Mental Health