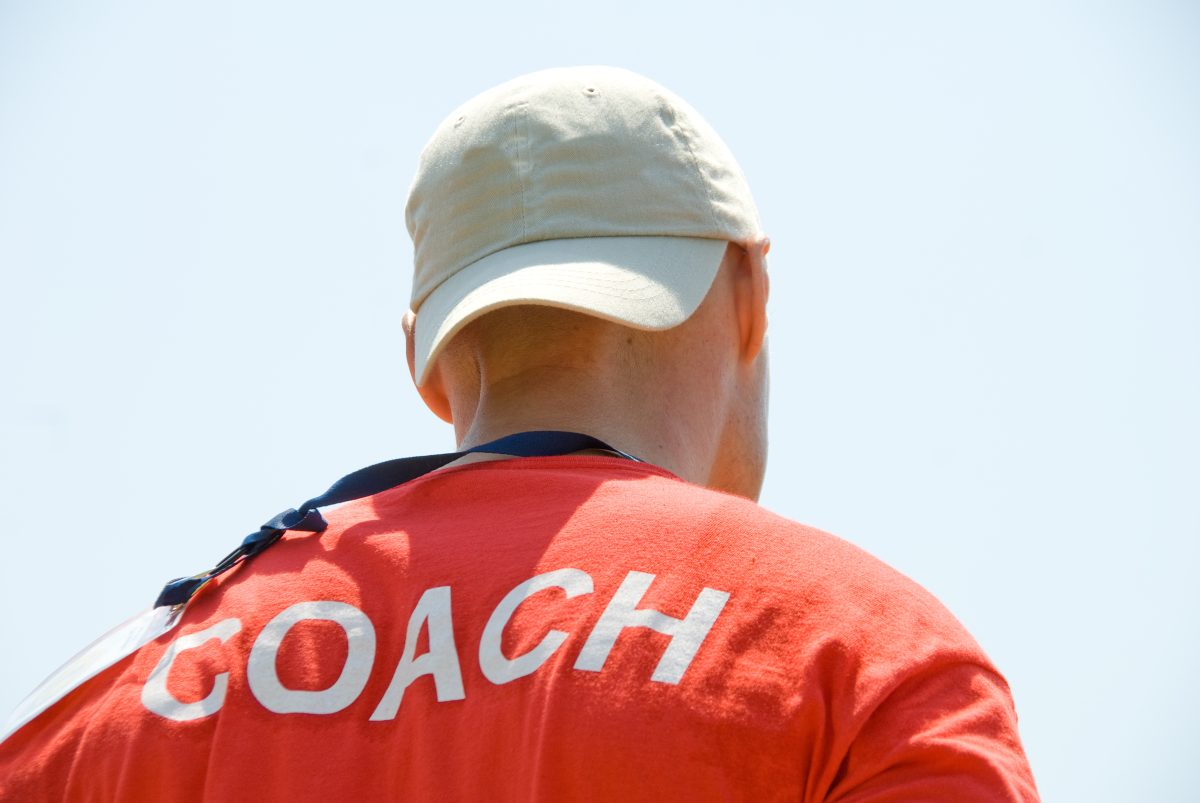 College sports are a lifestyle for many people and an indispensable business opportunity for colleges and universities. Many UNC System schools are perhaps better known for their sports teams than for their academic offerings. Likewise, it can be common for students to make their college decisions based on athletics.

After flirting with the benchmark during previous fiscal years, UNC-Chapel Hill’s athletic department finally surpassed $100 million in both revenue and expenses in 2017-18. While most schools use such money about as quickly as they make it, there is no denying that college sports are a major source of revenue for universities.

It is difficult to get an accurate picture of what a coach’s total pay is.Throughout the UNC System, there is a wide range of salaries for both sets of coaches. Some schools, such as UNC-Chapel Hill and North Carolina State University, have better known sports teams and are able to dedicate large dollar amounts to their athletic departments. Other schools, such as Winston-Salem State University and Elizabeth City State University, have smaller athletic departments. As a result, we see much more conservative salaries for their head coaches. Of course, there are many schools and programs that fall somewhere between these two extremes.

As the USA Today NCAA Salaries Database shows, there are many pieces of information that should be taken into consideration when analyzing coaches’ salaries: base pay, other pay, and school buyouts. In most cases, a coach’s total salary consists of what the school commits to pay (base pay), plus a portion of compensation that is categorized as “other pay” and consists of any athletically-related outside income, such as sponsorships and royalties. This self-reported income makes it difficult to get an accurate picture of what a coach’s total pay is using salary information that the UNC System reports.

The tables below show the football and men’s basketball coaches’ base salaries. 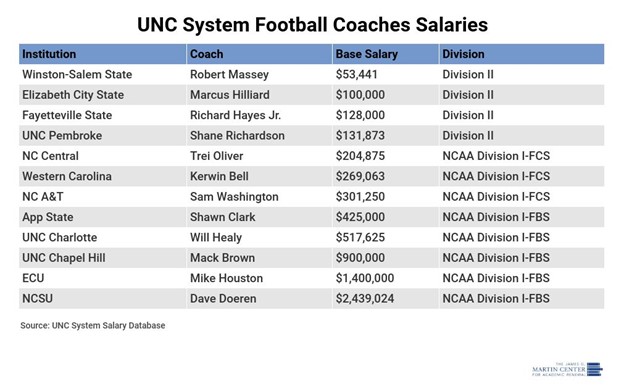 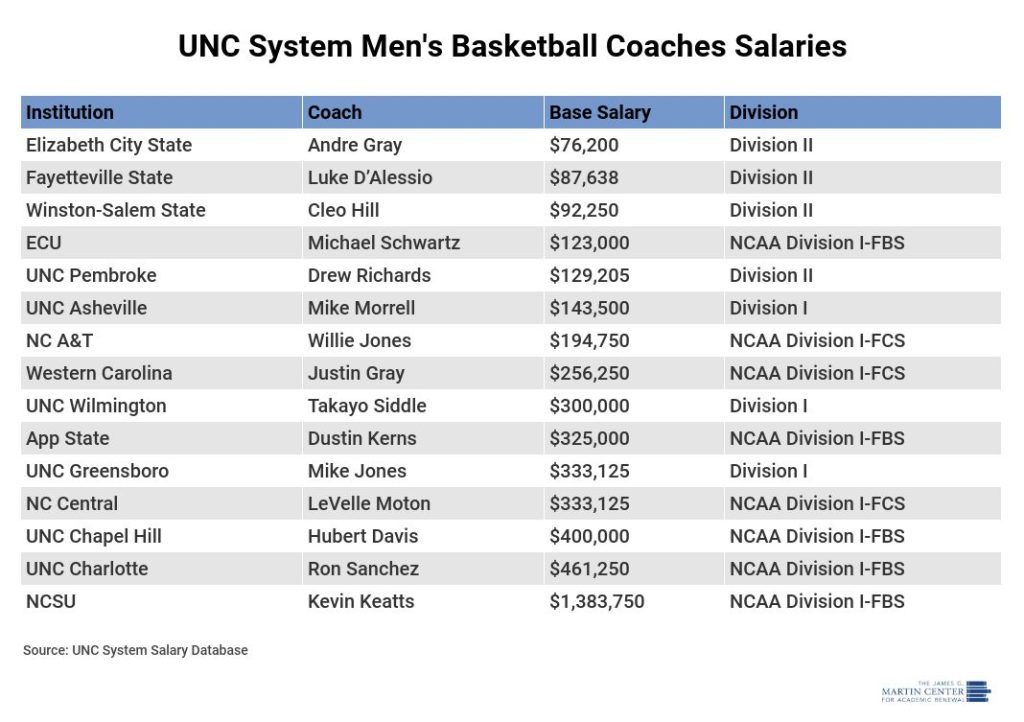 While these base-pay data are helpful, they don’t give the entire picture. With “other pay”— sponsorships, benefits, etc.—it is likely that base pay is merely the tip of the iceberg.

One good example of this is UNC-Chapel Hill’s new men’s basketball coach, Hubert Davis. Hired in April of 2021, Davis receives a base salary of $400,000. However, his total pay includes upwards of $600k in supplemental (“other”) income, $750k from sponsors, and $50k as a yearly expense allowance. This puts his total compensation at about $1.8 million, though it should be noted that Davis’s supplemental pay increases annually.

While the base-pay data show North Carolina State University offering the highest rate of all the UNC System schools, when total pay is considered UNC-Chapel Hill’s coaches make similar amounts. At NCSU, Kevin Keatts makes a total salary of $2,755,315, and Dave Doeren makes a total of $3,180,000. At UNC-CH, meanwhile, Hubert Davis makes $1,800,000, while Mack Brown makes a total of $3,431,250.

While the “buyout” concept seems fairly simple, it can result in some absurd situations.Another component to consider is each coach’s most recent “buyout” amount. A school’s buyout is essentially what the university would owe each coach were he to be fired without cause. If a coach isn’t producing a winning team and a school decides to fire him, then it has to continue to pay that coach until the buyout amount is reached. The buyout system also has an inverse: If a coach leaves for another team before his contract is up, he owes the school a buyout amount.

While this concept seems fairly simple, it can result in some absurd situations. In most cases, it is the new school that pays the buyout. Thus, if a school wants a coach who is under contract elsewhere, it may end up paying its current coach’s buyout (assuming he is fired), as well as the new coach’s competitive salary, as well as the buyout to the new coach’s previous school. These numbers can quickly add up to an outrageously expensive deal.

As with salaries, buyout amounts vary widely, but they can become hefty depending on which coach is under discussion. For example, Roy Williams, who retired as UNC-Chapel Hill’s men’s basketball coach last year, had a total compensation package of $4,168,250 in 2021 and a whopping $7,612,500 buyout.

How do UNC System coaches’ salaries compare to those at other schools? It’s almost impossible to say. Given that the main data we have refer only to base pay, there’s no real way to know if our comparisons will be accurate, since total pay can dramatically change the numbers (as previously shown). Unfortunately, this means we have only a part of the big picture.

Providing more transparency in regard to head coaches’ total pay would help the public get the full picture of compensation packages. What we would find there might very well shock us.

Ashlynn Warta is the state reporter for the James G. Martin Center for Academic Renewal. This article is the second in a series on compensation in the UNC System. The first and third entries, on chancellors’ and athletic directors’ salaries, respectively, can be read here and here.

Editor’s Note: A previous version of this article included North Carolina A&T’s head baseball coach in the men’s basketball graphic. That error has been corrected.