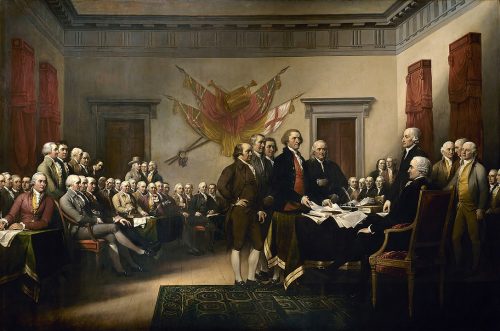 A short-lived report quickly torched by the new Biden administration provides a pathway for those who seek to return to a classical structure of higher education.

The report, titled the 1776 Report, by President Trump’s appointees in the 1776 commission, called for a “return to the unifying ideals stated in the Declaration of Independence,” according to commission president Larry Arne of Hillsdale College. Arguably true to the foundational principles of the young republic, the report “quotes the greatest Americans, black and white, men and women, in devotion to these ideals.”

The name of the report was of course based on the founding year of the republic and was a deliberate hit at the controversial and much-debated 1619 Project of The New York Times.

The report was duly erased from the US Government website, although a cached version is visible, as is an abridged version and the full version. The now-defunct commission apparently will continue to meet as private individuals to decide on a new course of action, per one of the founding members.

One of the chief aims of the report was to outline the reason why the United States is so divided, as it lacks not just a genuine mass civics education, but also a unifying national story, which has frayed since the late 1960s. The report states,

Today, however, Americans are deeply divided about the meaning of their country, its history, and how it should be governed. This division is severe enough to call to mind the disagreements between the colonists and King George, and those between the Confederate and Union forces in the Civil War. They amount to a dispute over not only the history of our country but also its present purpose and future direction.

Naturally, given that the 1776 report was initiated by the Trump administration, it faced a significant coordinated assault from predominantly left-liberal media. There were academic criticisms, with some historians calling facts in the report out of context and cherry-picked, and others saying it is a puerile reactionary document. Others called for a non-partisan government-led “study” on the founding of the American republic.

Furthermore, a blistering article in New York Times somewhat bafflingly questioned the credentials of the writers behind the report. David Harsanyi pointed out how surprising this appeal to authority, as the 1619 Project was led by “Nikole Hannah-Jones, a polemicist who earned a master’s degree in journalism and has no relevant training as a historian,” whereas the 1776 commission had a mixture of PhD-holders in relevant disciplines such as classics, government, and political science.

Ultimately, to rephrase a much-abused aphorism, the validity of the project was defined by who the project’s enemies were. Most of the criticism, of the 1776 project was predicated on two points, that one, there’s no fixed founding of the United States (and it was a fundamentally racist and white supremacist polity that was founded); and two, the national story of the United States thus far is flawed and corrupted and therefore needs to be retold and restructured to the point where no previous unifying story exists.

Accordingly, the 1619 project, with the major support of the country’s establishment narrative weavers in academia, media, and corporate sector, started the restructuring of the national story.

Unfortunately, that hit a snag, as the new story was polemical and empirically flawed. But the new 1776 project, while identifying some major issues, came too late, and lacked a workable policy suggestion to reframe the national curriculum beyond vague ideas such as preserving liberty, and discarding identity politics.

As Martin Center’s research showed, ideas, without a clear path of implementation will only lead to failure.

That said, the 1776 project finally clarified something which both conservatives and classical liberals need to understand: The major narrative builders of the United States are neither conservative nor liberal, and unless the new narratives are countered properly social cohesion within the republic will be even more frayed. Any nation needs a unifying national story, and this is sorely lacking in history and civics education today.