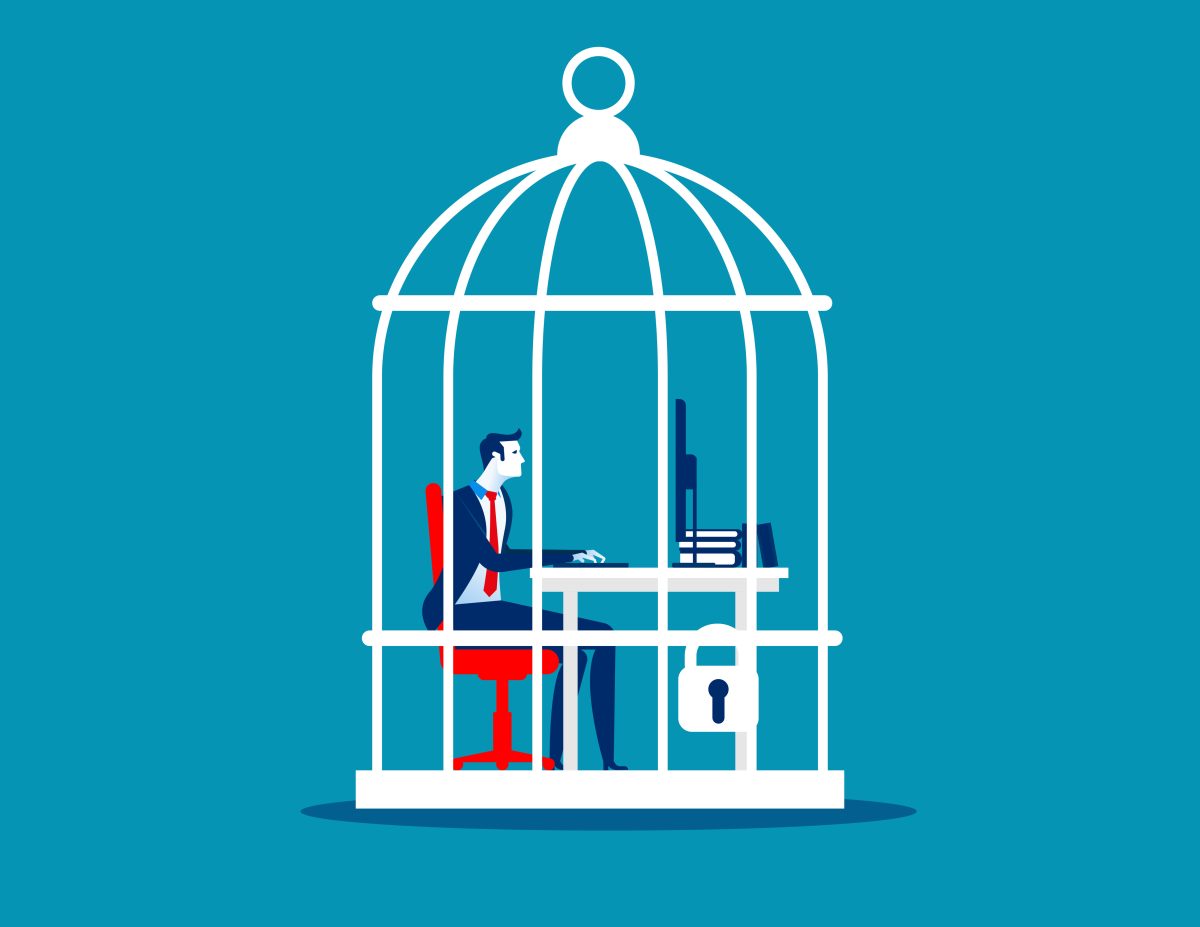 Business schools in the United States are fiercely competitive and, by and large, led by intelligent, careful individuals. The top schools’ nigh universal endorsement of progressive values—in word and in deed—sets the tone for the rest and stems neither from incompetence nor malicious intent. Rather, it stems from incentives dictated by rankings criteria and ideologically motivated recruiters.

This conquest by the woke mob will surprise many observers, given business schools’ distinct presence on campus: focusing on corporate profitability and practical concerns more than academic inquiry.

Notwithstanding, progressive dominance has become monolithic and largely unchallenged. Self-righteousness and dogmatic intolerance from true believers make pushing back against their initiatives a recipe for retribution. Contrarians keep their heads down, withdraw from public discourse, and migrate to private discussion forums and off-campus gatherings.

The most selective business schools have become privileged, wealthy bubbles insulated from and unable to relate to the majority of Americans.

Anecdotes abound, and an illuminating example comes from the Anderson School of Management at UCLA. As reported by the New York Post in October, Accounting Lecturer Gordon Klein “is suing the school for putting him on involuntary leave and allegedly threatening to fire him because he refused to grade black students more leniently than whites” after George Floyd’s death.

Klein, who had enough spine to push back against the student request, contends the vengeful hoopla undermined his reputation and chased away consulting contracts and most of his income. Even though Klein followed UCLA Faculty Code of Conduct, which prohibits race-based discrimination, the school dean sent out a mass email and said Klein’s declination was “outrageous” and an “abuse of power.”

After a public outcry in Klein’s defense and pressure from the Foundation for Individual Rights in Education, the Anderson School backed down and admitted the event did not merit an investigation. Still, Klein says professors see his experience and are “scared to do anything that might be controversial.”

The social-justice crescendo amid top business schools—already firmly established—became glaringly obvious during the Black Lives Matter riots of 2020. Although the schools’ responses were the tip of the iceberg, they made the broader problem undeniable.

Their uniform support for many BLM causes underlined the schools’ inability to remain neutral educational institutions. The Jones Graduate School of Business at Rice University, for example, swiftly initiated a Task Force on Racial Equity and Social Justice and expanded its Office of Diversity, Equity, and Inclusion. The Jones Student Association fundraised $12,100 for nonprofits such as Black Lives Matter Houston and the Black Trans Advocacy Coalition.

The incentives that drive this progressive dominance in business schools help to explain its scope and nature. Top business schools are practitioners of game theory, taking precisely the actions, explicitly and implicitly, that maximize their positions on the pecking order.

That includes, for example, establishing a group known as the M7. This is an Ivy League-like cartel of seven elite business schools in the United States that meet twice annually to cement their shared status as the most prestigious and influential in the world.

The game-theory lens also explains why the leading programs are so similar. Top business schools, whose marquee program is the full-time master of business administration (MBA), follow the numbers and battle to deliver what students crave: (1) prestige and (2) employment, which in turn drive tuition payments and alumni donations.

We should not be surprised that business schools sidestep meritocracy and recruit students who boost standings on ideologically driven rankings.

Since rankings and employment placements are crucial chokepoints for business schools, ideological gatekeepers have targeted both to bring the schools into submission. What few people realize, for example, is that the rankings themselves reward the progressive priorities of secular, legacy media.

When rankings publications say jump, business schools ask “how high?” The emphasis on branding and perception, rather than educational quality, is even more pronounced in business schools than elsewhere on campus. Business schools, with some exceptions, focus on soft skills and job placement rather than classical education or technical skills. The case-study method, which dominates MBA classes, imparts little useful knowledge but promotes networking and teamwork.

The Financial Times this year published a review of its ranking methods and history: “to encourage greater gender balance and international perspectives, the rankings now measure and report on diversity in the student cohort, faculty, and leadership. They also consider the teaching of corporate social responsibility.”

Similarly, CEO Magazine weights “international diversity” and “gender parity” at 10 and 5 percent, respectively, of its MBA ranking. Bloomberg has this year added “race, ethnicity, and gender” as one of its five ranking pillars—the others being compensation, learning, networking, and entrepreneurship. Half of the additional pillar focuses on race and ethnicity, and the other half on gender (“Total women + nonbinary population”).

The Bloomberg grading on race and ethnicity rewards business schools for recruiting the self-identified ethnic groups that are less likely to take the GMAT entrance exam: African Americans, Hispanics, Native Americans, and those of mixed race. That stands even though each school has little to no capacity to impact who takes the exams, which are administered independently and generally have candidates not yet committed to any program.

We should not be surprised that business schools sidestep meritocracy and recruit students who boost standings on ideologically driven rankings. That goes beyond flagrantly lower admissions standards to include generous scholarships and outreach initiatives. Once enrolled, few if any students fail, and grade nondisclosure has become the norm at most elite programs, which conceals disparities within cohorts.

Ironically, the so-called diversity ingredient makes the rankings less dynamic and reinforces the status of elite schools. They have an easier time recruiting the favored ethnicities, which constitute about 20 percent of GMAT test takers. With few of those candidates remaining, the schools outside the top 50 have a seemingly impossible task catering to the rankings’ demographic preferences.

Even if the rankings were to ignore demographics, as US News and World Report does for MBA programs, there would be little respite. Human-resources departments have their own progressive agendas, so these preferences still show up in the all-important rankings criteria related to employment outcomes.

The profundity of affirmative action within corporate recruitment and business-school life is hard to overstate. However, within the echo chamber, few people are willing to point out the hypocrisy of the discrimination.

Business schools excel at getting students to pay as much as they can while still enrolling. Murky but sophisticated formulas assign different levels of financial aid. Students soon work out where the money tends to flow, which generates tension.

Even prior to classes beginning in the fall, there are exclusive recruiting events and internship opportunities for pampered demographics, essentially anyone who is not a white or Asian heterosexual male. The same goes for summer-internship recruiting in the fall, where many firms first seek to meet their demographic targets before broadening their searches.

Business schools work diligently to satisfy company preferences and will admit the students and promote the values they see as likely to fit into the corporate milieu. Since corporate employers and professional associations are now falling over themselves to adopt environmental, social, and governance factors, business schools are falling into line and promoting that agenda out of self-interest.

The same goes for stakeholder capitalism and initiatives for diversity, equity, inclusion (DEI)—the buzzwords of the day. There are initiation classes and mandatory values commitments for students, but DEI priorities also dictate campus events and slant curricula and dictate case-study selection. A high-profile case competition, initiated by the Goizueta Business School at Emory University, devotes itself to “racial justice.”

There is little way for business schools to evade the rising tide of social-justice politics and remain competitive with rankings and prominent employers. Even if some administrators are not on board, they are the unenviable meat in the sandwich.

Student dissenters will have an increasingly difficult time in elite programs and will have to endure the DEI training and keep their opinions private or be ostracized. They would do well to find islands of sanity, such as the Adam Smith Society, which is a club for classical-liberal MBA students and graduates. They can also consider locally or religiously oriented schools, which are somewhat less beholden to rankings.

Fergus Hodgson is a native of New Zealand and the director of Econ Americas, a financial consultancy based in Colorado. He holds a BA in economics from Boston University and an MBA in finance from Rice University, graduating with the full-time class of 2021.