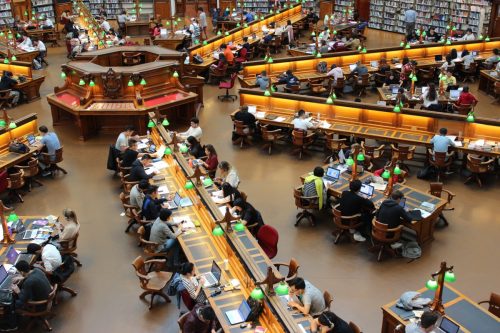 The Chronicle of Higher Education recently released a report decrying the politicization of public higher education governance, entitled The New Order: How the Nation’s Partisan Divisions Consumed Public-College Boards and Warped Higher Education. The report says more about the tunnel vision that pervades the liberal media and academic establishment than it does about the real state of politics in academia.

Politicization is indeed a major governance problem, as the report suggests. However, it is not, as the authors claim, a recent phenomenon resulting from Republican dominance in state politics, the Tea Party movement, and the surge in conservative populism.

It is instead a longstanding pattern that has been gradually increasing for over a century. The recent resurgence of Republican, conservative, or traditionalist involvement in higher education governance is not a cause, but an effect of politicization. It is the result of pre-existing political partisanship and extremism.

Only one side of the political spectrum—the left—has had significant influence at the vast majority of American campuses for a long time, and it has indeed been pushing a political agenda. Much of the country is waking up to an Ivory Tower that openly works against, not just their traditions and interests, but long-held standards of objective truth and merit. For many people, this situation is untenable, and they are just starting to demand that educational institutions serve their needs and respect their values, especially at the public universities they help to fund.

Naturally, that is causing dissension and controversy in university boardrooms.

And it’s about time! Complacency in the face of growing anti-society extremism is no way to run a university system. For too long our educational institutions have been sleepwalking us to a future we will regret.

The Chronicle report focuses on the political machinations concerning public higher education board activity in several states. But the authors of the report leave out or underplay several key factors that make the performances of the Republican boards seem worse than they are. Higher education was a deeply troubled institution before 2010—the year the Tea Party revitalized the Republican Party—yet the article essentially ignores this prior state of affairs.

Democrats dominated public university boards every bit as much in those “good old days” as Republicans do today in the states discussed in the report. For example, in North Carolina—the state that is the central focus of the report—the Democratic legislature commonly reserved four or five seats out of 32 on the University of North Carolina (UNC) system’s Board of Governors for liberal Republicans who did not pose any serious opposition to the liberal agenda to create the appearance of bipartisan cooperation. The other 27 or 28 seats were given to Democrats. Board meetings back then were largely social events, and the media, for the most part, did not stoke the fires of controversy.

But, while governance may have seemed to run smoother back then, those in charge permitted massive problems to grow and fester throughout academia, in North Carolina and elsewhere. Costs and tuition soared much faster than the rate of inflation and faster than any other major sector of the economy. For instance, according to the National Center for Education Statistics, in constant dollars, room, board, tuition, and fees roughly doubled between 1985 and 2010. And according to Onlinecolleges.net, student debt rose from $10 billion in 1986 to $1 trillion in 2012.

Those trends are largely the result of Democratic governance and policies. But as bad as their handling of higher education’s financial aspects were, intellectual developments during that same period were even worse.

Academia began moving away from the spirit of free inquiry that had been its central mission, despite the implication by The Chronicle authors that pre-2010 governing boards acted as “collective guardians of sacred trusts.” New York University social psychologist Jonathan Haidt—himself a liberal Democrat—has emerged as an important public intellectual by publicizing the way that academia is replacing free inquiry as higher education’s highest value with a dogmatic faith in a radical form of social justice.

That change is no small matter; it is a transition in the underlying philosophy of our society every bit as dramatic as the shift from divine revelation to empirical objectivity that occurred in the late 19th century. Only, while the previous philosophical shift brought many benefits to go with some negatives, the approaching transformation pushed by today’s academia is likely to bring nothing but devastation and tyranny.

The evidence of academia’s increasing leftist bias is overwhelming. William F. Buckley became a national figure by exposing it in God and Man at Yale—all the way back in 1951. The push to the left since then has been relentless. A series of reports focusing on humanities and social science faculty voter registrations show that that there were four Democrats for every Republican in 1972, eight to one in 2005, and 11.5 to one in 2015.

Even that imbalance does not reveal the full degree to which the academy has radicalized. Today’s Democrats are not the same as they were in 1972, and any serious look at academics’ scholarship will show that it is increasingly extremist. Strong support for violent Marxist groups such as Antifa or Black Lives Matter is the rule on many campuses.

New unproven theories such as multiculturalism, gender fluidity, and critical race theory have become indisputable orthodoxies on most campuses. Public universities now routinely violate the principle of institutional political neutrality by investing endowments according to political beliefs, presidents signing politically tinged climate statements, and making statements of support for radical political movements. To openly object to these absurd theories is to invite scorn and ostracism; somebody who does so is unlikely to be hired or promoted in much of the academy.

This madness is in large measure due to university governance by the liberal establishment. Academia has not been wisely run by earnest stewards in the last half-century; it has been manipulated and directed by a political movement.

Beyond leaving out the crucial historical context of past politicization, The Chronicle report also paints routine, expected, natural activities by governing bodies as scheming, devious, and underhanded—but only if performed by Republicans. For example, they suggest that there was some nefarious underhanded plot by the Republican-controlled UNC Board of Governors to take over the university system by firing the system president in 2015:

Once the chess pieces were in place on the board, the end game became clear: Take out the king. At that time, that was Thomas W. Ross, who had been named president of the system in 2010, a few months before Republicans took control of the legislature.

A lot is missing from this description. First of all, system presidents serve at the pleasure of the board. And it is only natural that a board would select a president who is in sync with their agenda. Keeping Ross—a liberal Democrat—in the presidency seemed to be a breach of faith with the people of North Carolina, who had overwhelmingly voted for the Republicans to take over the state after 140 years of Democratic control.

Certainly, the Democrats on the UNC board never ceded power to conservatives from 1972 to 2010, when they chose four Democrats and one liberal Republican whose political beliefs differed little from their own to be UNC system president. In this light, it appears as though The Chronicle authors condemn Republicans for the same activities for which they give Democrats a “pass.”

It appears as though The Chronicle authors condemn Republicans for the same activities for which they give Democrats a “pass.”

Furthermore, instead of firing Ross immediately, the Republicans allowed him to serve for three years, even though they had held both a majority of the board and the powerful board chair position starting in 2012. There was anticipation that he would retire in 2015 after five years, the same amount of time served by his predecessor, Erskine Bowles, but he signaled his intention to continue indefinitely. Expectations that a board chosen in such an environment would allow him to do so are unrealistic. The removal of Ross was in line with the will of the people of North Carolina; clearly, in several elections starting in 2010, they had demonstrated a desire for change from the century-long Democratic control of the state.

The Chronicle article ties the incessant turmoil and controversies concerning the UNC system to the Republican control of the board. In a sense, there is some truth to this criticism; the board has underperformed, and many of the board chairs—who are extremely powerful—have proven to be inadequate. Another problem is a lack of unity on the right: For example, many establishment Republicans are less interested in intellectual renewal than they are in treating universities as economic tools, while their “movement-oriented” colleagues want some focus on academics.

And in North Carolina (and probably elsewhere), many of the problems are due to the way the board is still functioning as it did before 2010. That is, the board is still allowing itself to be dominated by entrenched bureaucrats and media opinion rather than confidently asserting its full power.

Even though most American colleges and universities were set up with boards in firm control, and even though boards still have considerable statutory or chartered authority, over time they have been reduced to rubberstamp committees, booster clubs, and donation-based ATMs. This has allowed the faculty and administrators to push their agenda—and it has indeed been political.

Because that agenda has been so successful, so biased, and so radical, higher education could use some disruption. The Chronicle authors appear to be too far inside the leftist bubble to see how one-sided their analysis is. And they fail to see how precarious the leftist hold on the nation’s intellectual life is. They may call the pushback “politicization,” but it may in fact be an understandably awkward first step toward the American people reclaiming the public institutions they created to serve their needs.