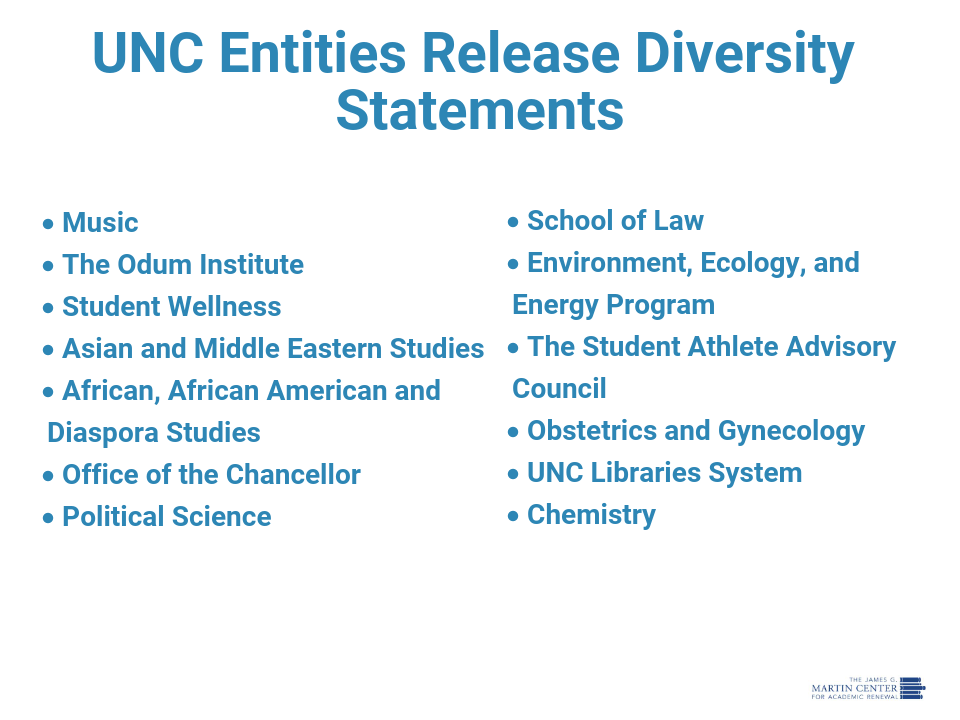 After the killing of George Floyd and the protests that followed, several departments at the University of North Carolina at Chapel Hill have released statements on their intention to fight systemic racism.

In a petition, alumni of the political science department want it to “make serious efforts towards re-constituting the graduate program towards a more just, expansive, and inclusive, vision of academic excellence.” To do so, they want the department to recruit more faculty of “under-represented groups” and a mandatory orientation session—it’s not clear if it would be for students or faculty—that outlines expectations for equitable treatment.

The chemistry department shared a short statement denouncing endemic racism in America. The statement condemns discrimination and goes on to say that “one of our key goals is to create and sustain a Chemistry community where all feel welcomed, respected, and free to pursue their goals and dreams.”

The UNC Libraries system also added a diversity statement to its website. The statement pointed out the libraries’ failure to “advance equity and justice.” As the statement put it, “These systems implicitly and explicitly perpetuate inequity because they have been traditionally centered on whiteness and patriarchy as a default.” To combat racial inequity, the University Libraries outlines a plan to figure out how it has failed to uphold racial diversity and justice and to implement change with “courage and conviction.”

Ten other departments have released statements or resources on racism and diversity:

UNC system president William Roper and chairman of the Board of Governors Randy Ramsey also announced the establishment of a race and equity task force. This task force will meet with students, faculty, and staff to discuss issues of race and equity in the UNC system.

However, all those statements conspicuously leave out a major detail: Examples of exactly how UNC’s “sustained racist culture” has manifested. Although they claim that students of color have suffered from their experience at UNC, they don’t cite any specific incidents aside from #BlackInTheIvy tweets and “a set of legacy systems.”

Tangible examples would be actionable. But pointing to perceived racial slights makes it difficult to have an honest conversation about combating racism. The statements from UNC departments strike a chord with student and alumni activists, but do less on engaging students and faculty on a concrete level.

Nicole Divers is a Martin Center intern and a senior at the University of North Carolina at Chapel Hill.

Did You Know? More Open Seats at NC Colleges This Fall