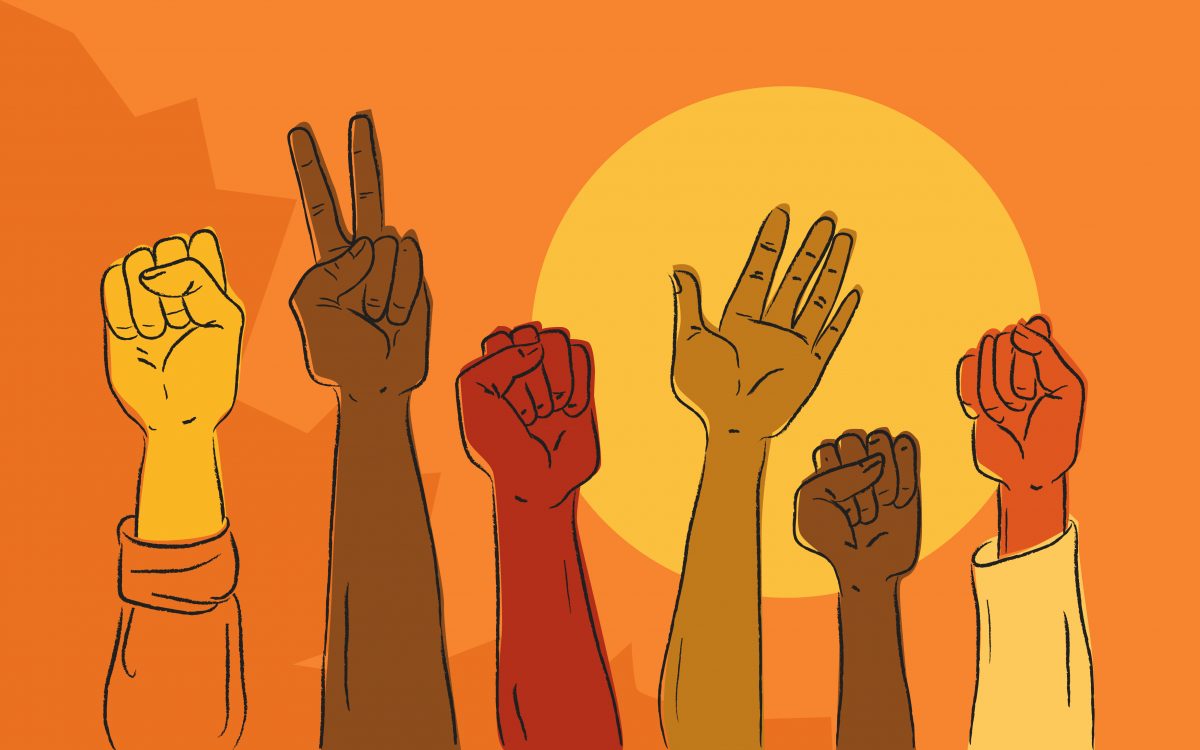 On June 8, interim UNC system president William Roper and chairman of the Board of Governors Randy Ramsey announced the establishment of a race and equity task force. The announcement came a day after three individuals associated with the UNC system wrote a letter requesting that such a task force be established.

In the letter, David Green, Garrett Killian, and Isaiah Green wrote that they condemn acts of violence against “people of color, especially those that target Black men.” They continued:

We are keenly aware that some members of our academic community may know, on a visceral level the traumatizing pain of racism while others are safely insulated from these lived experiences. Collectively, we believe that silence equates to consent. United, in this historic moment, we choose not to be silent, but instead to be active agents of change in this teachable moment.

The authors argued that the university system is obligated to teach about racism and to ensure that all “people of color”—in particular “Black stakeholders”—have a right to feel included and valued.

In response, Roper and Ramsey wrote that they “support the sentiments expressed” in the letter.  They noted that recent acts of violence “compel all of us fully to recognize and grapple with our country’s history of racism and oppression that has so often resulted in violence.”

“As members of the University community, it is our obligation and responsibility to do the hard work needed to address inequities in the UNC System for the benefit of students, faculty, staff, and all North Carolinians,” Roper and Ramsey wrote. They then announced that the equity task force will be established as a six-member special committee of the Board of Governors, with board member Darrell Allison as chair and board members Kellie Blue and Anna Nelson as vice chairs.

According to the memorandum, the task force is expected to meet with students, faculty, and staff groups to discuss issues of race and equity in the UNC system, as well as concrete steps that can be taken to achieve greater “equity and understanding.” The task force will also prepare a report of recommended metrics and goals which will be presented to the full board on October 2.

The task force had its first meeting by video conference call on July 9. Chair Allison kicked off the discussion by stating that he believes it is important for everyone on the task force to start with a common understanding of terms that will be used in their work. He then asked that the following graphic be displayed and said:

This work ahead of us is not about diversifying the system aesthetically, primarily, but about advancing equity through our actions and policy. Equity means the equality of being fair and impartial. Are there areas within our system and within each of our institutions where actions and policy can be a little fairer and more impartial?

A diverse and inclusive organization or system operates with the belief that the solution to the problems it faces can be found [by] affirming individuals’ similarities and finding value in their differences. Equity seeks to ensure fair treatment and equality of opportunity for all our faculty, staff, and students. And I’m confident that all of us desire equal participation and outcomes across the system so that we can close achievement gaps in student success; build a strong pipeline of faculty, staff, and administrators who are just going to have to work a little harder at making it so.

Allison said that the task force’s work will be defined by three focus areas:

Shun Robertson, the UNC system’s senior associate vice president for P20 policy and programs, presented data on educational disparities within North Carolina and the UNC system. She stated that postsecondary education is vital because workforce demand for skilled workers continues to increase. “But not all North Carolinians are prepared for these positions,” she said. “According to the latest data released by the Lumina Foundation, less than one-third of black, Hispanic, and American Indians have an associate degree or higher. [That’s] lower than [the] base average of 44 percent and lower than their white/Asian counterparts,” she reported.

Robertson then said that “these gaps did not come to exist by chance and they will not close on their own.”

Robertson pointed to the difference in graduation rates by race and said that it’s important to disaggregate data this way because it is the “first critical step to addressing inequities because doing so allows us to see differences in student outcomes.”

And data do reveal differences in student outcomes. For example, the data Robertson presented show that “less than 10 percent of black, Hispanic, and American Indian 9th-grade students eventually graduate from UNC or a North Carolina community college on time.” 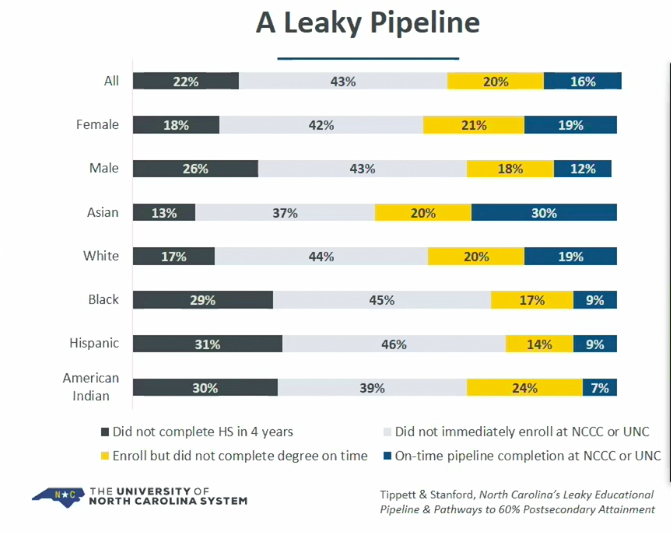 There is also a great deal of variation in UNC system graduation rates. According to 2011 data Robertson provided, 78 percent of Asian students graduated, 75 percent of whites, 56 percent of blacks, and 69 percent of Hispanics.

In conclusion, Robertson suggested that the task force might want to consider implementing or improving college readiness programs, student advising and support, college affordability, mental health programs, and community college transfer initiatives in order to “close the gap” in student outcomes. She also suggested that the task force look deeper into institutional-level data on student success.

Next to present was Chris Chiron, UNC-Chapel Hill’s senior director for employee and management relations in the office of human resources. Chiron reported on two Diversity, Equality, and Inclusion surveys from 2018 and 2020. According to the 2020 survey, 75 percent of white UNC employees agreed that “people support colleagues regardless [of] heritage/background.” Only 67 percent of Hispanic employees and 58 percent of black employees agreed with the statement. Forty-nine percent of white and Hispanic employees both agreed that “promotions are based on a person’s ability,” while 41 percent of blacks agreed.

Green said that the most important thing they will do as a task force is to “listen” to students, faculty, and staff, and respond to their concerns. Some campus engagement listening sessions will take place in person, despite COVID-19. He noted that they are committed to conducting about four or five visits to each campus.

Killian said that the staff assembly will engage with faculty, staff, and students through multiple platforms such as in-person town hall meetings, live feedback via Zoom sessions, private emails, and engagement surveys.

The Martin Center will continue to provide updates on the equity task force’s work and its forthcoming recommendations.

A Chancellor Search Tainted with Suspicion and Shrouded in Secrecy