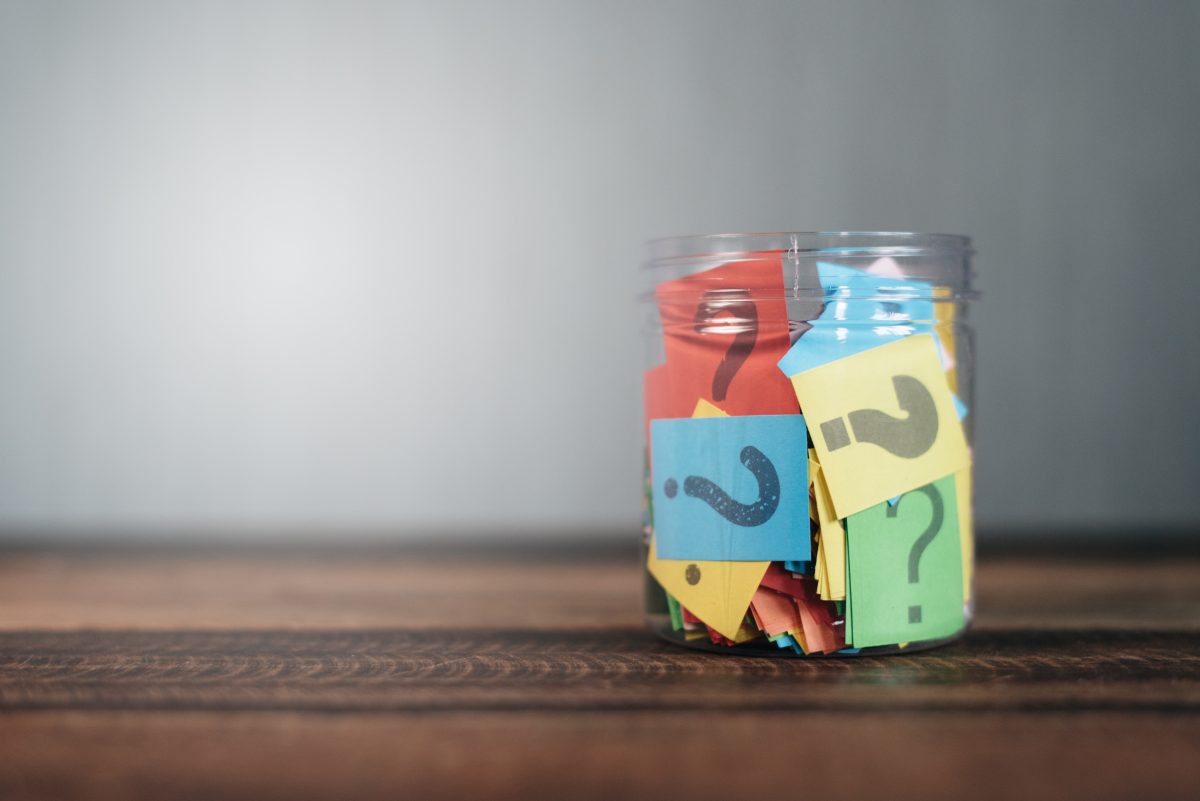 As Oscar Wilde tells us, “Moderation is a fatal thing. Nothing succeeds like excess.” This is especially true of bureaucracies on college campuses. Once their seeds are planted, their growth often continues without check.

Administrative offices have been growing on college campuses since the 1980s, undoubtedly contributing to the increasing cost of a degree. Besides being expensive, administrative growth shifts resources away from education towards administrative programming. This threatens to undermine higher education’s central mission of teaching and research.

There has been particularly rapid growth over the past two decades in the area focused on the promotion of diversity, equity, and inclusion (DEI) on college campuses.

Aside from real concerns about the politicized and divisive nature of DEI, there are serious questions about whether or not these initiatives are even fulfilling their purported purposes—namely, to make students feel more welcome on college campuses.

DEI programs and administrators, as a relatively new and growing development, are understudied from a performance perspective. How many people work in DEI? How successful are these initiatives at carrying out their goals? A new report by the Heritage Foundation, entitled Diversity University: DEI Bloat in the Academy, takes a close look at these questions. The report is authored by Jay P. Greene, senior research fellow at the Heritage Foundation, and James D. Paul, distinguished doctoral fellow at the University of Arkansas.

Since DEI is a relatively new phenomenon, there is not a comprehensive dataset of all DEI staff in American higher education. A major component of Greene and Paul’s report is developing this data set, which they then use to evaluate the efficacy of DEI initiatives.

To build their data set, Greene and Paul selected 65 universities, representing 16 percent of all four-year university students in the United States. The universities are a collection of “the five ‘power’ athletic conferences: the Atlantic Coast Conference, the Big 10, the Big 12, the PAC 12, and the Southeastern Conference.”

With this subset of universities, Greene and Paul used web searches and staff pages to identify which university staff fall under the DEI umbrella. They excluded staff from their count whose responsibilities included Title IX, health services, or researchers whose studies include DEI topics. As such, they acknowledge their total count of DEI staff at the 65 universities may be an undercount of the total personnel working in DEI-related positions.

With this method, Green and Paul found almost 3,000 individuals listed with DEI responsibilities at the 65 universities, with an average of 45.1 individuals devoted to DEI. There are outliers on both sides of the data set. For example, the University of Michigan maintains 163 DEI employees, while Baylor and Texas Christian employ only 7 DEI staff.  (see table below). 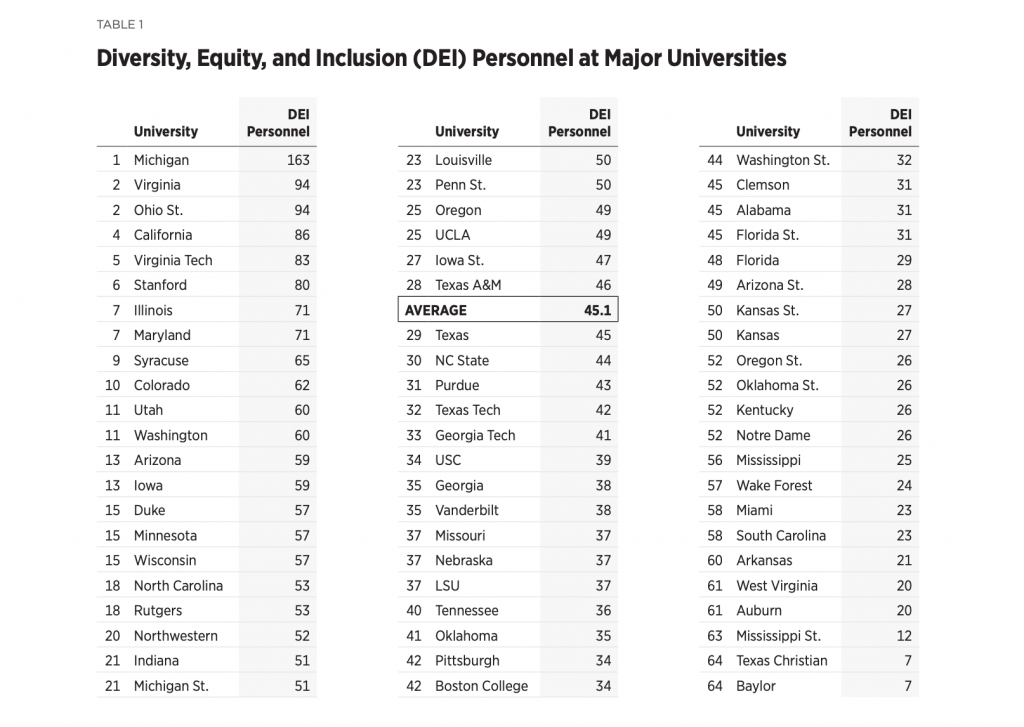 The authors then use their dataset to draw comparisons via ratios to other faculty and staff categories, such as comparing the amount of DEI personnel for every tenured or tenure-track history professor. Their findings demonstrate a significant percentage of DEI staff relative to other university employees. For example,

Clearly, DEI initiatives are well-staffed, but how effective are they at furthering their goal of making campus more “inclusive”? Green and Paul investigate that question as well. They use campus climate surveys to measure how students perceive the general climate on their campus.

While the authors were constrained by the campus climate surveys not being identical across universities, they were still able to draw conclusions from the surveys. The authors posit that if “larger DEI staff numbers are beneficial in achieving the goals of a positive, welcoming environment, one should see more positive responses at the universities with more DEI personnel.”

In general, however, this is not what the authors found. Rather, they report,

There appears to be little relationship between DEI staffing and the diversity climate on campus…In general, student reports on campus climate are no better—and often worse, especially for minority students—at universities with larger DEI staff levels.

This finding may provide support, as some scholars argue, that DEI initiatives diminish traditional higher education goals and spread division among students, faculty, and communities.

The University of North Carolina at Chapel Hill has a large DEI emphasis, with the second-highest ratio of DEI personnel to ADA compliance staff among the institutions sampled. In a campus climate survey, UNC students were asked whether they agreed that they “felt a sense of belonging to this campus.” Overall, 73 percent agreed with this statement, but among African American students the figure drops to 54 percent. Again, having many people with job responsibilities to promote DEI does not seem to close the gap between African American and other students in terms of their feeling of belonging on campus.

Since no prior data exists, it’s hard to know whether the figures above represent an improvement over time. The gap between 73 percent and 54 percent is large, but perhaps it was even larger before the presence of DEI programs on campus. While that is possible, the large gaps may also demonstrate the ineffectiveness of these initiatives. As Anthony Hennen reported for the Martin Center, “for all the money pouring into diversity efforts… the academic research suggests it’s not effective at making people more inclusive or less racist.” “For the substantial sums that UNC schools put into diversity training and initiatives every year, the actual benefits may be non-existent,” writes Hennen.

Evaluating the efficacy of DEI programs is especially important given their size and resource utilization in the UNC system—particularly when UNC-Chapel Hill is making major budget cuts to balance its long-standing deficit, and other UNC system schools are facing financial hardship due to Covid-19 restrictions.

In light of the report’s findings, North Carolina schools should closely examine the effectiveness of DEI initiatives on campus, especially before growing them. If ineffective, it is a valid question to consider how the programming could be changed, or alternatively, whether resources should be deployed away from DEI programs and directed towards the more traditional teaching and research missions of the universities.

David Waugh is the Managing Editor of the American Institute for Economic Research. He is also a Don Lavoie Fellow with the Mercatus Center. He previously worked as an associate for S&P Global Market Intelligence.