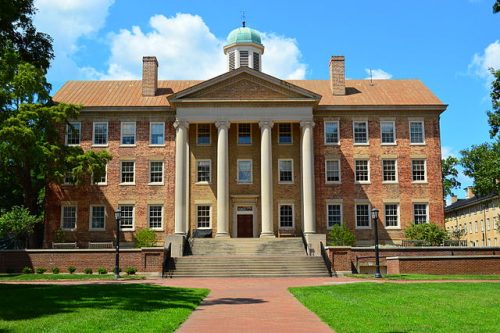 The course, History (HIST) 383, grew out of Smith’s involvement in UNC’s lengthy academic scandal as a critic of the university. He co-authored a book with Mary Willingham in 2015, entitled Cheated: The UNC Scandal, the Education of Athletes, and the Future of Big-Time College Sports.

After reading the current exchange between Smith and Curran, the first thought that sprang to mind was the oft-cited saw—attributed to a great variety of people, from Samuel Johnson to Henry Kissinger—that “Academic politics are so vicious because the stakes are so small.”

Upon further reflection, however, I realized that the squabble contains two very important issues. The first one is explicitly stated in support of the university’s case and concerns academic freedom. The second is not mentioned by either party but exposes the university’s abdication of responsibility in important curricular matters.

I will refrain from discussing every one of the many twists and turns and claims and counter-claims in the nearly two-year-old dispute. (Most of the pertinent documentation can be found through the links.) The basic facts begin with the course and some background. The course is listed as HIST 383 and is described in the catalog as:

The evolution of college sports since the creation of the grant-in-aid in 1956. Key turning points include the NCAA basketball tournament of 1979, the 1984 Supreme Court ruling that opened the floodgates to television money, the cascading scandals of the 21st century, and the emergence of an “athletes’ rights” movement.

The current controversy began with Smith’s accusation that university administrators denied him his academic freedom by not permitting him to teach the course in the fall of 2017. He furthermore states that administrators have been guilty of intimidation and harassment, suggesting that comments about budget constraints were “veiled threats” and likening them to “crime families use of intimidation.”

Curran denies these charges and says, in essence, that the refusal to change the schedule was a practical matter unrelated to the course content and that academic freedom was irrelevant. After all, Smith has been allowed to teach the course three times over a two-year period: in the summer of 2016, the fall of 2016, and the spring of 2018. This hardly suggests an attempt to silence his opinions.

Now, it would be hard to find more persistent critics of the UNC system and UNC-Chapel Hill than the Martin Center over the years—and I have certainly been one of the more aggressive members of the Martin Center when it comes to pointing out UNC’s failures and follies. But in this case, it seems that the university’s case is quite strong.

Indeed, it almost seems as if Smith is spoiling for a controversy with which to bludgeon UNC into submission for past antagonisms that occurred during the athletic scandal. Or perhaps he is looking to induce a landmark case for academic freedom that establishes the rights of professors over the authority of the school.

His claim concerning the denial of his academic freedom rights is specious. According to the News & Observer, he acknowledges the authority of the school to approve courses but said that “long-established practice dictates that it is the faculty’s role to determine what to teach and how to teach this.” Even ignoring that his claim is controversial, since there is a long train of court decisions, beginning with Hetrick v. Martin in 1973, that limit professors’ control over content, there is nothing in Smith’s or the Faculty Grievance Committee’s documentation that suggests the university tried to interfere with his in-class teaching.

Furthermore, his opinions are not being curtailed in any way. He published a book highly critical of the university and remains employed there. He has not been denied tenure or a promotion. The UNC administration has not scheduled “shadow courses” at the same time and on the same topic as his in order to draw students away from attending his classes. Nor has UNC performed any of the other methods colleges use to intimidate or exact retribution from defiant professors.

And even if UNC had rejected his course because of its content, it is within the university’s authority to do so. UNC could have rejected HIST 383 as a course, period.

But UNC did not do so: HIST 383 is part of the curriculum. From the administration’s perspective, the matter is simply a matter of scheduling. At the time the controversy began, the schedule for the fall of 2016 had been set for several months. Over the summer, Smith decided he wanted to replace one of the courses he was teaching in the fall, History Honors 516, with HIST 383, and sought permission to do so. The administration balked, saying that the schedule was set and some students had already enrolled in History 516H.

Even so, Smith taught HIST 383 in the fall of 2016. But when the course was denied a place in the schedule for the fall of 2017, he filed a grievance complaint.

Smith said he didn’t have a problem with the actual scheduling, but the “gross violations of the protocols that govern course scheduling.” This includes a few off-hand comments by Dean Kevin Guskiewicz about budget constraints and future scheduling that he interpreted as intimidation. Even in an atmosphere of “’declining enrollments, declining majors,’ and its [the history department’s] reputation as “’being over-resourced,’” as Guskiewicz was quoted as saying in the Faculty Grievance Report, Smith’s course was scheduled for the spring of 2018. The whole affair would appear to be little more than “he said, she said” bickering, not mafia-like threats and certainly not grist for an important academic freedom case.

Even if UNC had rejected his course because of its content, it is within the university’s authority to do so.

Early this month, the UNC-Chapel Hill Board of Trustees decided in favor of the administration. It would appear it’s time for Smith to move on—after all, he is able to teach his course as he sees fit. As they say in the sports world, “no harm, no foul.”

But then we come to the second issue, the one not mentioned by either party. It concerns a glaring absence of governance and administrative oversight of the curriculum regarding the questions: Exactly why is Smith’s course part of the history curriculum in the first place? What important topic does HIST 383 address?

Answer: its importance is minuscule. HIST 383 may have value in a sports management curriculum, but not as a history course. In the history department, it is a vanity course based on the professor’s personal interests. As one looks through the courses offered by UNC’s history department, the number of missing topics that deserve inclusion far more than HIST 383 is infinite.

This is not to diminish Smith’s valuable contribution as an author and critic of the UNC sports scandal. He should be applauded for his efforts in that capacity. But that does not mean his course adds much value to the history curriculum. Perhaps, if the scandal were of a much greater scale, such as the Watergate scandal bringing down a U.S. president, then he should have his own course on the matter. But UNC’s sports scandal, while sordid and interesting in its own way, as well as meaningful to the UNC-Chapel Hill community, was hardly a world-changing event.

And looking at the course list for the history department, there is no shortage of other courses that could easily be eliminated without hurting the knowledge base of aspiring historians. They include:

Clearly, these courses do not fill any great need for aspiring historians. Indeed, they may detract from an education because of the opportunity cost of students taking them over more valuable or more rigorous topics. Often, these courses are justified on the basis of their popularity with students, particularly for a discipline such as history with declining enrollments. But, popularity is a false standard. Drinking beer is popular at college as well, but that hardly recommends that students receive credit for imbibing.

In a November 2017 letter to the Faculty Grievance Committee chair, provost Robert Blouin cited the “philosophy statement” of the Southern Association of Colleges and Schools Commission on Colleges Principles of Accreditation, which states “the right of faculty members to teach, investigate, and publish freely” is secondary to the “overriding obligation of an institution to offer its students a sound education.”

It is time UNC started taking that overriding obligation more seriously. If more rigorous courses are less popular, so be it. The objective of a university is not to provide faculty employment, nor is it to permit faculty a chance to develop their own interests at the expense of more serious education of students.