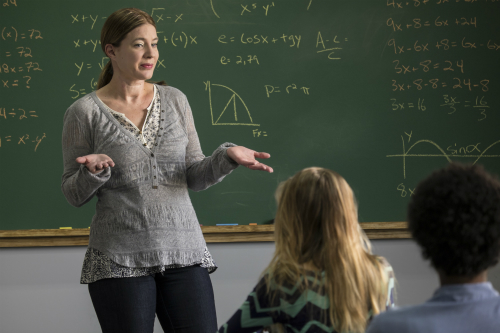 In 2013, North Carolina stopped giving automatic pay raises to public school teachers who earn master’s degrees. In the legislature, the debate focused on teachers and whether graduate degrees make them better at their jobs. There is little reason to believe so, as this and other studies show.

Overlooked in this discussion is the predatory role that universities and their private sector partners have played in establishing automatic pay raise policies. Those policies encourage large numbers of teachers to seek graduate degrees, but without any corresponding incentive to seek out a rigorous, useful program. This large pool of eager but undiscriminating students has brought out the worst in universities.

Outside of North Carolina (and Louisiana), most teachers still get automatic pay raises for earning a master’s degree. The size of those raises varies by state, but it’s a low-paid profession and, unsurprisingly, a great many teachers are anxious to increase their pay.

With a large number of teachers seeking master’s degrees, a correspondingly large industry has sprung up to meet the demand.

But here’s the problem. These policies treat all master’s degrees as interchangeable. The teacher who spent two years (and a lot of money) getting a master’s in physics at Cal Tech would get the same raise as a colleague who earned the cheapest, least demanding online master’s in education he could find.

Thus, for most teachers, the master’s has become a commodity, like soybeans or RAM. They all work equally well, so why pay more for the fancy one that requires a lot of effort? Inevitably, this has caused the proliferation of master’s programs in education, many of them online, which make minimal demands of their students. Universities, in short, are in the business of selling cheap credentials.

There is some evidence that math and science teachers who earn master’s degrees in their disciplines perform better in the classroom, but the vast majority of teachers pursue graduate degrees in education rather than the subjects they teach. School systems end up paying automatic raises with no reason to believe that teachers who receive them are any better than before they earned a master’s degree.

The perverse incentives created by this policy also extend to higher education.

Universities have in effect become rent collectors. For a teacher to get that raise, he first has to pay a university $8,000 to $20,000 in tuition, often with borrowed money. The teacher has an incentive to find the cheapest and least demanding program he can find. Given the intense competition for students, universities have incentives to provide just that.

This has led to a race to the bottom in education master’s programs. To keep things cheap you have to make compromises. Class sizes in online master’s courses sometimes exceed a thousand. Things such as requiring the GRE for admission, comprehensive exams, rudimentary safeguards against cheating, and regular direct contact with your instructor? Gone.

But what if your competitors have also made their programs as rigor-free as yours? Then it’s time to ramp up your marketing and the private sector is ready to lend a hand.

Of all the consequences of the automatic pay for master’s policy, the most troubling is the rise of what are called Online Program Managers. OPMs are companies that provide marketing for online programs at public universities. While they manage many types of degrees, they are drawn like flies to degrees that serve as commoditized credentials.

At my institution, Arkansas State, we work with a Dallas-based company named Academic Partnerships (AP), which provides the marketing behind most of our online graduate programs. In exchange for their services, we pay AP half of the tuition from the programs they market. (The details of these contracts are considered proprietary and exempt from the Freedom Of Information Act, but I believe our agreement follows standard industry practice.)

So if a student pays $8,000 for one of our AP-marketed master’s programs, AP gets $4,000. You read that right; students in these programs are paying $4,000 for their education and an additional $4,000 for the cost of selling that education to them.

When a program is offered through AP, the university has to enroll at least twice as many students to break even and that assumes that there are no additional instructional or administrative costs associated with the scale of these programs. For comparison, a student earning a conventional master’s degree at Arkansas State in chemistry or English would pay over $10,000 in tuition and fees, all going to the university.

The fact that teachers who earn masters’ in math and science fields show actual improvement in their teaching suggests the latter possibility is more likely than the former.

My examples come from Arkansas State, but the same dynamic is at work at other universities and in other states.

Currently, Arkansas teachers are rewarded for paying significant amounts of money, much of which ends up in Texas, for degrees that can’t be shown to improve their teaching. University administrators get to pontificate about their bold efforts to move the university into the brave new world of online education and claim that their enrollments are up, even if traditional programs that may better serve the state’s educational needs are in trouble.

State officials get to brag about the growing number of teachers with graduate degrees.

And the OPMs watch the money roll in.

So everybody wins—except for taxpayers who foot the bill for this, teachers who have to pay for dubious degrees to earn reasonable salaries, university faculty who have the depressing task of “teaching” in these programs, and school children whose educations might benefit from a better system of incentives.

Eliminating the automatic pay raise for earning a master’s degree would end this destructive distortion of the market for higher education. It would be far better if teachers were rewarded for demonstrated improvement in their craft, regardless of how that improvement was achieved. Doing so would empower teachers to make their own choices about how to improve.

If some teachers feel a master’s degree would help them become better at what they do, they’d enroll in the programs of their choice. As long as they could demonstrate improvement, they would get merit raises based on that improvement rather than the credential.

Eliminating the automatic pay raise would also benefit universities by forcing them to focus on quality rather than aggressive marketing. It would result in graduate education programs that actually make teachers more capable. Recent scholarship suggests that good teaching can be taught. Unfortunately, few colleges of education currently do that.

With appropriate rewards for merit, teachers would choose to enroll in programs with reputations for producing graduates who then earn merit raises. Programs that don’t deliver value to teachers hoping to advance their careers would wither and disappear—as they should.