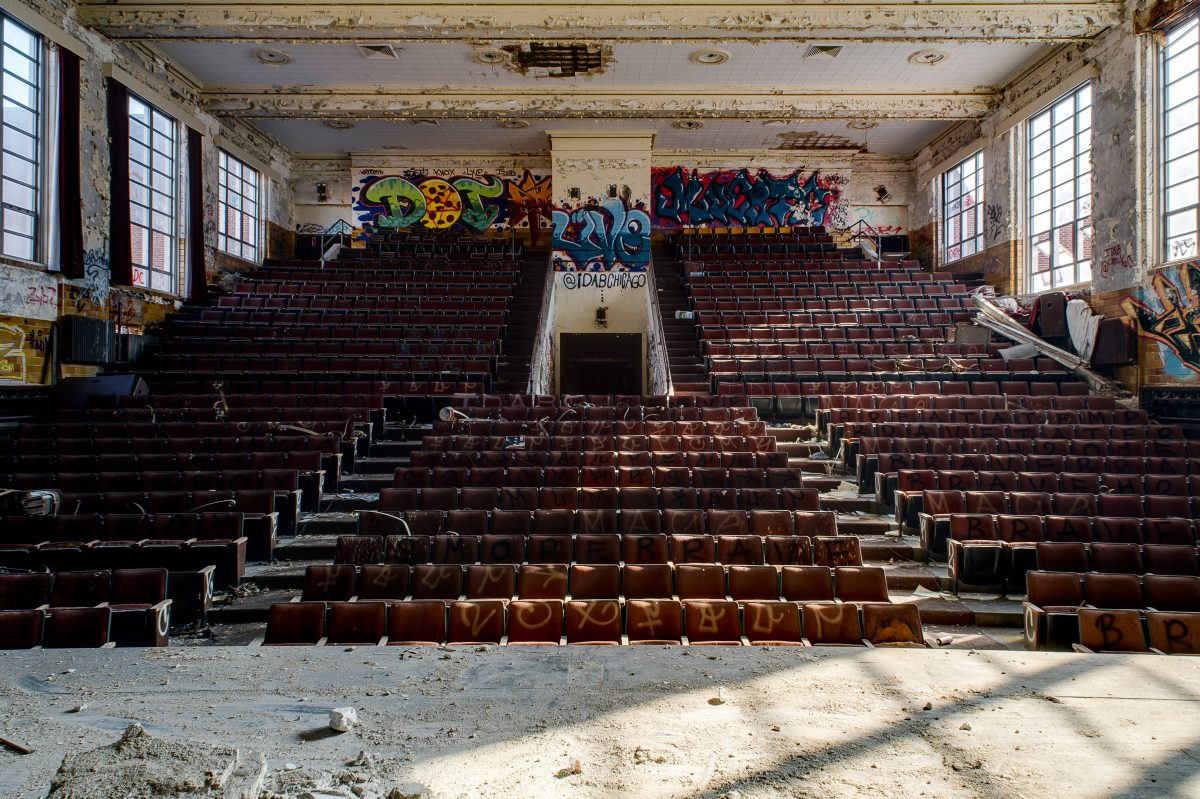 Editor’s note: This is the second of a two-part essay; part I can be read here.

The previous essay dealt with the moral decline of the student body in higher education—one of the motives behind my recent retirement after three decades of teaching college English. When I began teaching, most of the English faculty members, including the chair who hired me, had earned their doctorates in the late 1970s.

They were oleaginous liberals, naturally, but they were also ladies and gentlemen of actual education and considerable high literacy. They took it for granted that the purpose of a literature program was to bring to life in students the Intuition of Form or Imagination about which George Santayana writes in his Sense of Beauty. According to Santayana, “Imagination…generates as well as abstracts; it observes, combines, and cancels; but it also dreams.”

As the Old Guard went into retirement, a cohort of new assistant professors filled the department’s tenure-track lines. The new phase of aggressive affirmative-action recruitment ensured that this replacement-generation of instructors, overwhelmingly female, differed starkly in character from its precursor-generation.

The new hires came to the institution from the politically radicalized graduate programs of the state universities. Whereas the Old Guard corresponded to a literary-generalist or dilettante model—terms that I use in a wholly positive way—the arrivistes brought with them only their narrow specialisms, as encrusted in their conformist political dogmas.

Mention Santayana to the Old Guard and chances were good that any given one of them would be familiar with the drift, at least, of the philosopher’s work. Mentioning Santayana to an arriviste produces a blank stare.

Richard Weaver’s notion of “presentism” makes itself relevant to the discussion. By “presentism” Weaver intends a mental restriction that has steadily eroded the modern, liberal view of reality. This mental restriction, as he puts it in his Visions of Order (1964), manifests itself primarily in a “decay of memory.”

Weaver writes, “Wherever we look in the ‘progressive’ world we find encouragements not to remember.” Today it is not an “encouragement,” but rather a demand not to remember, as the monument-defacement and statue-toppling of the times so savagely demonstrate. This anti-historical dementia has fully infiltrated graduate studies and through them has colonized the literary branches of higher education. The unending pageant of neologisms and slogans that now makes up “literary studies” illustrates this anti-developmental development.

The Young Guard of current academia bedecks its office doors with posters and bumper stickers in a perpetual spiral of moral one-upmanship. This moral certitude poisonously inveigles everything that novice college instructors undertake.

I once overheard a conversation between two Young Guards, both female, in the departmental commons. One of them was taking over a course relinquished to her by a retiring Old Guard, a senior-year seminar on Theories of Language. One of the earliest theories of language occurs in Plato’s Cratylus, which the previous instructor had listed as required reading, and likewise essays by Gottfried Herder, Jean-Jacques Rousseau, and Max Müller. “I had to replace them all,” the young woman sighed to her conversational partner; “they were so old.”

Yes, Plato’s Cratylus is old—a fatal flaw to young professors. So she swapped out the historically informed reading list for a jejune textbook anthology.

She had likely never read the Cratylus, or Herder, or Rousseau, or Müller. She knew Chaucer, but only through the lens of political correctness, and she touted the feminist and race-conscious deconstructions of The Canterbury Tales. In respect of her general ignorance, the newly minted instructor of Middle English resembled her bookless students, at whom academic publishers aim textbook anthologies, with their compendia of short excerpts and mini-articles, none of which appeared in print before 2015, promoting the race-class-gender interpretation of everything.

Where newbies cannot replace the traditional with the contemporary, they lard on “the latest theory.” This predilection varies only slightly from the tactic of hyping the latest model in automobile salesmanship. Only a Neanderthal would drive last year’s model or read the Cratylus. It is imperative to be up to date.

Mandatory up-to-date-ness, precisely as Weaver asserts, finds memory, which recalls the past, annoying. Because memory operates as a basis of consciousness its exclusion amounts to a diminution of consciousness, a type of voluntarily embraced amnesia. Weaver wonders “whether there is not some element of suicidal mood” in the presentist concentration on itself, “or at least an element of self-hatred.” He speculates that the presentist might react to the past as though it were a “reproach.” Weaver’s analysis explains a great deal.

The Young Guard brings other traits. The department once housed me in an office-suite next door to one of the new hires—a female affirmative-action selectee concerning whom a senior colleague confided, “Her promotion to tenure is a foregone conclusion.” It became evident that being the workplace neighbor to Lady Entitlement would try anyone sorely.

She trailed after her a gaggle of undergraduate groupies with whom she carried on loud conversations while leaving her office door wide open. The badinage veered into the crass and vulgar, the loud-mouth instructor and her entourage using the f-word constantly. The same badinage revealed itself as resentment-oriented and self-absorbed.

When after weeks of distraction, I sent a polite email asking that the perpetrator at least shut her door, I received an immediate reply of several thousand self-justifying words, the gist of which was, “go f—k yourself.” The then-chair acceded to my request that he should relocate me, but he never disciplined the foul-mouthed intrusion on communal ear-space.

Another female hire also constantly employed the f-word in casual conversation, but more than that she inserted it regularly into her classroom lectures. She belonged to the film studies program that the department, desperately wanting to increase its attractiveness, had imposed on itself. She screened movies in her classroom to a running commentary.

Every five minutes or so, she would pause, tilt her head, and ask rhetorically, “What the f—k?” She uttered the phrase in a studied way, prolonging the vowel in the last word as if it were the acme of rhetorical wit. The department eventually elected her as chair.

In The Culture of Narcissism (1979), Christopher Lasch links adult functional illiteracy to the persistence of infantile self-adulation beyond childhood. As Lasch and many others have observed, the narcissist suffers, not from an enlarged ego, but from an embarrassingly stunted ego, which looks for ways to conceal from itself knowledge of its limitations.

The narcissist stands “imprisoned in his pseudo-awareness of himself,” Lasch writes. The narcissist will, in his words, “gladly take refuge in an idée fixe, a neurotic compulsion, [or] a ‘magnificent obsession’—anything to get his mind off his own mind.”

Today’s university has structured itself around a narcissistic principle. Affirmative action would thus endow on the meritless the same status as the meritorious so that underachievers might see themselves as receiving the same “just deserts” as achievers.

In order to function, affirmative action must, in effect, penalize achievers, some of whom get pushed aside arbitrarily in the admissions process or, surviving that, have their grades devalued by inflation and their instruction diminished by the curricular dumbing-down. The affirmative principle invokes as its justification the feel-good motif. The affirmative principle therefore elevates sentiment over objectively measured competence.

Today’s university has structured itself around a narcissistic principle.

Students would rather watch a movie than read a book, not least because reading a book taxes their ability. The instructor wants glowing student evaluations at the end of the semester. She eschews books and repeats a piece of mouthy vileness popular among students, “What the f—k?” She congratulates herself when they applaud, which they do. Everything is cool.

Except that everything is not cool. Programs like film studies and creative writing carry the same inflated price tag as physics and police science, but they offer no return on the investment.

Affirmative action entangles itself Gordian-knot-wise with the stupefaction of the curriculum and the dissolution of standards. Film studies and creative writing attract horde-like enrollments. The upshot of film studies is producing a 3-minute video clip as one’s capstone assignment; of creative writing—publishing a one-and-a-half-page story in The Consolation Review.

In both cases, actual higher education shrinks away. In both cases, the institution defrauds its clientele. Students—say rather their parents or their lenders—pay. The college, through its faculties, flatters and deceives.

That last statement should be linked to an earlier statement. Santayana believed that the study of grammar and poetry formed the person at a higher level. Higher education as classically conceived proposed the attunement of the individual to the cosmic hierarchy, or what Arthur Lovejoy, in a famous study, called The Great Chain of Being.

That sounds grandiose only because, over the last century, a strain of nihilism has relentlessly defamed any Western notion of an elevated view. Lacking that view, however, institutions once accountable now promote into supervisory stations people whose public face consists in the look-at-me exercise of 8th-grade verbal scurrility.

The contemporary university forms nothing. Like the crushing backpack (see Part I), it deforms: It stunts, connives, deprives, confuses, and misleads; it rallies neurosis, corrupts language, lifts incompetence into rank, scorns merit, and pats envy on the back, all the while enriching itself by charging extortionate fees for its systematic malpractice.

A Platonizing Neanderthaler who reads George Santayana and Arthur Lovejoy and takes them seriously, I have remarked my anomalous presence in the marshlands of the contemporary academy for quite some time. As long ago as 1996, then living and teaching in Michigan, I published my report Declining Standards at Michigan Public Universities.

The research for Declining Standards uncovered the fact that Michigan businesses, hiring wave after wave of newly minted baccalaureates from the state institutions of higher education, had to remediate their new employees in such basics as written expression and the fundamentals of arithmetic—out of their own pockets to the extent of tens of millions of dollars a year.

Nothing has changed in a quarter of a century. The state college and university system is more than ever a criminal shuffle and a savage trespass into the heart of civilization.

Thomas F. Bertonneau (Ph.D. in Comparative Literature 1990–UCLA) is a recently retired English professor whose work has appeared widely in print and on the Internet.