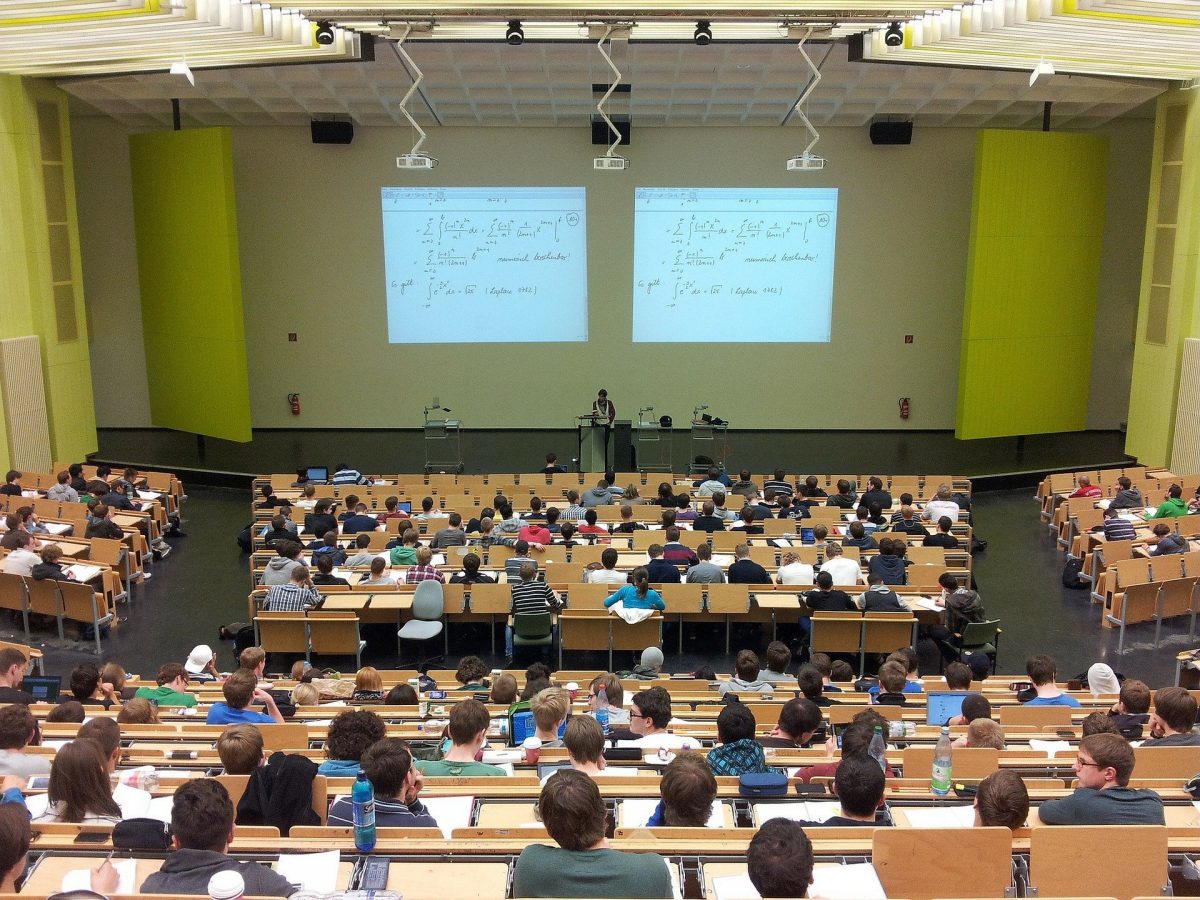 Editor’s note: This is the first of a two-part series.

In May of 2020, my wife and I took our retirement after more than 30 years of teaching college, the last 20 years of which we spent at what I will call Upstate Consolation University, a mid-tier state college somewhere in the Northeast. My wife taught French and I, a wide variety of courses, some 23 altogether over the years, in the English Department—concerning which, more to come.

Apart from wanting what remained of our active lives to be ours and not the institution’s, the main motive for our decision was the intolerable decline of Upstate. It had gone from a more or less serious academic organization, typically liberal but not yet politically correct or “woke,” into a copy of the ideological collective that, in the manner of Star Trek’s “Borg,” has digested and transformed virtually every center of post-secondary education in the nation.

“Resistance is futile—you will be assimilated.”

In the following paragraphs, I review my Upstate gig while highlighting the major symptoms of the aforesaid decline I observed. While my situation was specific to Upstate, Upstate is typical. My observations, therefore, have application well beyond the place where I gathered them.

Although all state colleges and universities shout “diversity” and preach “tolerance” at the top of their lungs, they in fact demonstrate monolithic bigotry and homogeneous narrow-mindedness.

I begin, however, with students, or rather with the accoutrement, apparently mandatory, to being a student on a contemporary college campus—the backpack. The backpack by no means offers itself an obvious place to begin a survey of the academy’s moral condition. I would nevertheless call attention to its ubiquity on campus.

Most college students would likely feel naked without a backpack and suffer embarrassment for lacking it. The backpack has grown in my perception as a symbol of the way in which the increasingly inhuman desert of four-year university life alienates and demoralizes students.

Did I wear a backpack in my undergraduate days at UCLA in the early 1970s? Yes. It contained two or three ball-point pens, a book of blank sheets for note-taking, and three or four cheap paperbacks, which served for the weekly reading assignment in whatever courses I followed during the ten-week term.

The 2020 backpack belongs to a different, a Brontosaurian, species. It bulks, for example, much larger than mine ever did. Its contents? They include the student’s laptop; four or five heavy, hard-bound “textbooks” that cost in the region from $150-$300, and which have no resale value on the second-hand market because, by miserly design, the publisher changes the contents every year. Then there is an MP3 player with its earbuds and charger; the charger for the student’s cell phone; and assorted personal items such as bottled water.

The specimen backpack must weigh 25 pounds.

Whenever the student isn’t sitting in the classroom, he or she wears it perched on his or her back. The effect is physiologically deforming. The bearer must lean forward unnaturally in order to walk under the burden, while the mass of it bends the spine and draws back the shoulders like a punitive restraint.

Certain orders of the medieval religious undertook penances such as shackling themselves with chains, scourging their flesh, or assuming a cumbrous burden. The monks and hermit-priests sought to expiate the impurity of their sinfulness by imposing on themselves such onerous freight, the marks of which, when the penance was done, would betoken moral reparation.

It is not at all clear that college students bundle themselves with any equivalent goal in mind. Why then do they crush themselves under all that cargo? I suspect an unconscious impulse.

The backpack is at once a confused protest and a tacit—though unheeded—self-confession. The backpack materializes the onus of debt, the likely un-repayable indenture that the baccalaureate holder will then drag through life in order to have purchased his worthless degree. The backpack also bespeaks the various programmatic humiliations that threading a contemporary undergraduate education entails. These are soul-distorting in the same way the ponderous rucksack is spine-bending even though most students remain oblivious to them.

The sight of the undergraduate coal-scuttle carrier evokes sympathy, but in many other respects, college students forfeit compassion.

A friend of mine from Upstate, “Fred,” served in the Army, where he rose to the rank of sergeant. After leaving the military, Fred found employment on campus as a manager of services. Fred and I frequently find ourselves in the same bar on weekends.

One afternoon, a gaggle of co-eds having entered the premises, Fred turned to me and asked, “Have you ever overheard them talking on campus?” I nodded, but let him continue.

“They use the f-word in every sentence,” he said, a phenomenon familiar to me. Fred, who came to Upstate from an environment where the f-word possesses a degree of functionality, nevertheless took offense in the profanity of female undergraduate banter.

Fred’s speech maintains a civilized quality and in this, he differentiates himself from students, female or male. It is not that co-eds implicate themselves exclusively in voluble profanity. Male undergraduates indulge equally in expletives. They even invoke the f-word and the s-word in class, but a stern glance can enjoin such infractions.

The problem is a continuing one, however, and its implication remains unsettling. In other classrooms—this is the only possible inference—these language-proletarians have escaped admonition. They, therefore, assume that no one could possibly object to their verbal infelicities.

When I divulged to a colleague that I would retire at the end of the semester, she divulged back that she wanted to reclaim her life, too, as soon as possible.

“I’m tired,” she said, “of writing the same comments and criticisms over and over on student assignments.” She meant not only that succeeding cohorts of freshmen bring with them ad seriatim the scribal incompetency that public secondary education appears to foster, but that the same students, either during the semester or in one course after another, reveal themselves as unable to internalize basic corrections.

Casually inserting the f-word in every spoken sentence betokens intellectual frustration that cannot articulate itself and has a relation to the a-grammaticality and impoverished vocabularies of North America’s high school graduates. It also relates to the fact that they never, if they can avoid it, read.

Instead, students stare at text messages on their cell phones. They constantly slap those cell phones up against their faces, even when descending a staircase or crossing the street. Many college teachers have given up asking students to write essays. In English courses, not to assign written work would seem a scandal, but the lack of writerly capacity, which mirrors the lack of readerly capacity, mostly subverts the possibility of engendering sensitivity to language.

Text messaging disqualifies itself as either reading or writing. It is practice in the restriction of consciousness. Most entering freshmen have no experience with books, from which they instinctively shy, or of which they are blithely unconscious.

Suspecting this, I long ago established an early-in-the-semester in-class exercise in all my courses. The classrooms at Upstate come equipped with the usual array of audio-visual devices, including a document camera whose image may be directed, via the digital projector, to the screen at the front of the room.

The exercise involves a stack of books—old scholarly ones from the first half of the last century. I set them beside the document camera. A volunteer comes to the document camera and selects a book from the pile. The instructions are, “Start turning the pages slowly and when you come to the first page that might tell you about the contents or the order of exposition—stop.” The student begins to turn the pages: Publisher’s information and copyright, title page, table of contents, and…he keeps leafing, as though there were no clue.

This happens every time. It indicates a problem that no one wants to acknowledge. Public education in the U.S.A. has not produced—not for a long time—an educated public.

Public education in the U.S.A. has not produced—not for a long time—an educated public.

College students, by and large, belong to the successive waves of post-literacy brought about by anti-intellectual curricula in K-12 and the corrosive effect of “media culture.” George Santayana, an American philosopher, wrote in his Sense of Beauty (1896) that “grammar…is akin to the deepest metaphysics, because in revealing the constitution of words, it reveals the constitution of thought, and the hierarchy of those categories by which we conceive the world.” A bookless, a-grammatical student body has no possible access to genuine higher education.

Students have adapted, in some cases eagerly, to the pernicious ethos of denunciation that prevails under “wokeness” on every college campus. Inculcated in the theories of universal racism and a malicious patriarchy, their adolescent narcissism inflated by constant baseless praise and the exuberant celebration of their non-existent moral perspicacity, students are ready to be “triggered.”

They’re eager to detect moral heresy and run to deans with accusations of faculty misdemeanors.

For years now, to meet with students in the office on a closed-door, face-to-face basis, especially with female students, has entailed a risk. Wise it is to meet with students only in public areas with other people present, so as to pre-empt damning lies and neurotic misrepresentations. In the last two or three years in particular, students have complained to my supervisors many times.

They have complained because, in my lectures and in my selection of reading material, I have challenged the premises of a vehement and humorless Left-radicalism that purports to address everything “critically” but cannot muster so much as an iota of self-inspection.

The current darlings of the university’s ideological overseers, trans students, exhibit the greatest potential for being “triggered,” and exercise alacrity in denunciation much more viciously than others. Their mission, in the pornographic phrase that they have adopted, is to “Spread Pride.” Squint at one of them and Dean Headburger or Ms. Buglove, Chief of Human Resources, will issue a summons. They will assume guilt in advance.

Female students figure prominently in the foregoing paragraphs. Women currently dominate higher education numerically at the undergraduate and graduate levels and, increasingly, as faculty members and administrators. The feminization of the academy has altered colleges and universities greatly, to the detriment of men. Colleges and universities have become minefields for men, not least because of that permeating ethos of denunciation. The “woke” mentality takes the notion of “the toxic male” as a premise. The anti-male bigotry that the notion inspires has led to the blatant persecution of parties on charges of “sexual harassment” even when the complaint is obviously vacuous and self-serving.

One of his students overheard him. When she returned to campus, she sprinted immediately to Headburger and Buglove with the claim that the professor had insulted and humiliated her. Headburger and Buglove dragged the man through an agony of humiliation. The young female delator, for her part, had done her honorable duty under the new Stalinist Code.

Thomas F. Bertonneau (Ph.D. in Comparative Literature 1990 – UCLA) is a recently retired English professor whose work has appeared widely in print and on the Internet.