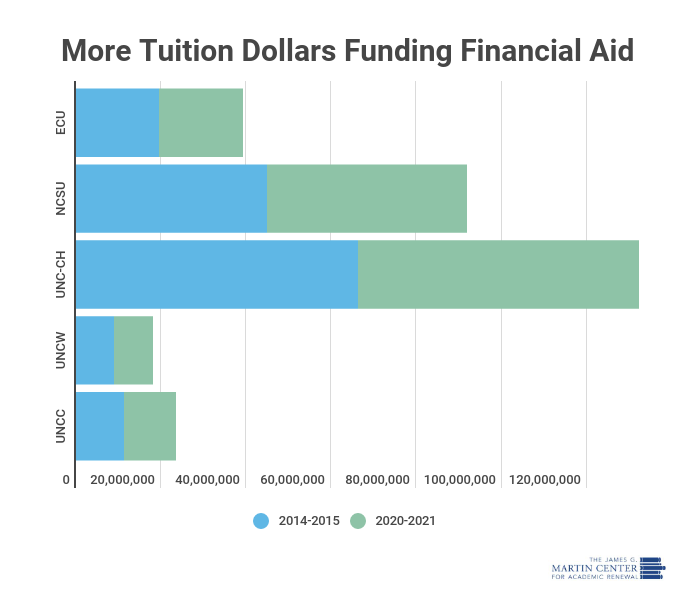 In 2014, the UNC Board of Governors voted to “place a 15 percent cap on the amount of tuition revenue that can be applied to need-based student financial aid.”

After the announcement, parents were surprised to learn that they were “subsidizing those who qualify for aid.” Since then, the Board has been required to provide more information on how much UNC schools have spent on financial aid from tuition revenues.

For the BOG’s July meeting, the committee on budget and finance released those details.

Across all UNC campuses, the system spent $212.3 million for financial aid taken from tuition revenue. UNC-Chapel Hill spent the most at $66 million, followed by NC State at $47 million and East Carolina University at almost $20 million.

Using tuition revenue for financial aid has been controversial at public universities since at least the 2010s. Higher education officials have questioned the use of money generated by tuition payments to fund aid, believing it “places an unfair burden on middle-class students because they may end up subsidizing other students, and have proposed various means of restricting the use of tuition dollars.”

On one hand, the money is used to provide more opportunities for students who struggle to pay for tuition and living expenses. On the other hand, colleges finding ways to lower costs would make tuition more affordable and a college education more accessible.

The Board did announce more funding for one program aimed at making some UNC schools cheaper, however. The BOG meeting disclosed that the General Assembly gave $15 million for NC Promise, which keeps tuition at $500 per semester for North Carolina students at Elizabeth City State University, UNC-Pembroke, and Western Carolina University.

While it’s not a system-wide change that lowers student fees and other costs, it is something tangible for students at a few schools to avoid more student loans.

The High Cost of Campus Parking

Even in a Pandemic, Campus Housing Restrictions Don’t Apply to Greek Life