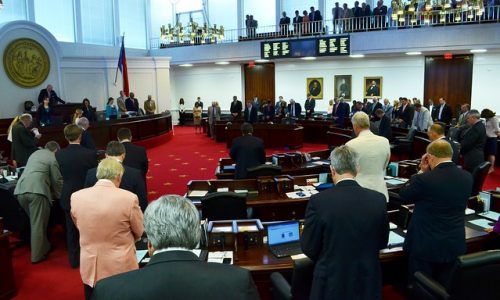 May 9 was the “crossover” deadline for bills in the North Carolina General Assembly. For a bill to have survived past that date, it must have either passed at least one chamber or carried a substantial spending component. For bills focused on higher education, about a dozen are left standing—mostly because they contain appropriations.

Bills that would make substantive changes to higher education policy in North Carolina are below. A full list of bills on all topics that made the crossover deadline can be found here, published by the Legislative Analysis Division.

The following eight bills made the crossover deadline. Most were passed by the House.

H8 In-State Tuition Pilot Program: This bill would authorize the State Board of Community Colleges to launch a pilot program that extends in-state tuition rates to residents of four Georgia counties that border North Carolina. The bill’s fiscal note predicts that the program would cost $42,510 per year. The bill passed its second reading in the House on March 20.

H62 In-State Tuition/Members Served on USS NC: This bill would make service members who serve on the battleship USS North Carolina for at least 180 days eligible for in-state tuition at North Carolina colleges and universities. Republican Representatives Cleveland and Horn are the primary sponsors of the bill.

H241 Education Bond Act of 2019: This bill would allow voters to weigh in on $1.9 billion in new borrowing to fund education construction projects. Of that amount, $200 million would go to community colleges and $200 million for public universities. (The remainder goes to K-12 public schools.) The debt service on the bill would be more than $100 million each year for most of the 20 years the bond would be repaid.

H389/S296 ABC University Athletic Facility: This bill would let public colleges sell alcohol at athletic facilities. Colleges can already sell alcohol at on-campus hotels, restaurants, and golf courses, among other places, but this policy change would allow sales during athletic events. It passed a second reading in the House on April 16.

H664 My Future NC/Postsecondary Attainment Goal: This bill would establish an educational attainment goal for the state, based on the recommendations of the My Future NC Commission. It would direct the state to make “significant efforts to increase access to learning and improve the education of more North Carolinians so that, by the year 2030, at least 2,000,000 residents between the age of 25 and 44 will have completed a high-quality credential or postsecondary degree.”

HB668/S436 Various Higher Education Changes: This bill would spark a hodgepodge of minor changes. Community colleges could provide insurance coverage instead of using bonds for necessary funds and the president of the North Carolina System of Community Colleges would be given the power to reorganize the system office (if the State Board of Community Colleges approves their changes).

UNC laboratory schools, which are partnerships between some UNC schools and local public schools, would also be required to provide transportation to students if they reside within the local school administrative unit, and the lab school and its workers and leaders would receive liability from immunity according to applicable state law.

The Future Teachers of North Carolina program also is revised, becoming a “selective, application-based symposium for high school juniors and seniors” with a stronger emphasis on practical benefits for participants. Its oversight is moved from General Administration by the state to the UNC System Office and an advisory council would be created to oversee the program.

S366 Ninth/10th Grade/College Transfer Pathways: This bill would let certain freshman and sophomore high school students take community college classes (as approved by the state board of community colleges). The primary sponsors of the bill are Republicans McInnis and Brent Jackson.

The following bills “require or will require in the future substantial additional State monies from the General Fund” and appear to be exempt from meeting the crossover deadline according to House and Senate rules. (The Legislative Analysis Division does not publish an official list of exempt bills.) However, many of them have, so far, stalled in committee. It’s unclear whether there will be any movement before the legislature adjourns.

H177/S372 Funds School of Ed. Bldg./Fayetteville State: This bill would provide Fayetteville State University $50 million to plan and construct a new school of education building. Although neither chamber voted to pass the bill, it is alive because it contains additional spending.

H472/S640 NC A&T State University/Ag. Funds: This bill would appropriate additional funds to NC Agricultural and Technical State University, a historically black public university in Greensboro, to provide a minimum match for federal funds to support agricultural research and cooperative extension program activities. Although neither chamber voted to pass the bill, it is still viable because it contains $2 million in additional recurring spending. The bill has bipartisan support. It was sponsored by Representatives Hardister, Dobson, Faircloth, and Clemmons as well as Senators Robinson and Garrett.

H478/S181 Restore ECU Academic Affairs Funds: This bill would allocate $1.1 million to East Carolina University for purchased services and supplies. Its primary sponsors are Representatives Kandie Smith, Humphrey, and Murphy as well as Senators Don Davis and Horner. The sponsors all hail from the Greenville area or counties surrounding ECU.

The following bills neither made the crossover deadline nor require substantial spending from the General Fund.

H231 The Harrison Kowiak Act: This bill would increase the punishment for hazing. It would classify hazing as a Class D felony if a victim experiences “serious bodily injury or death” or involves forced alcohol consumption that pushes their blood alcohol level beyond a .30 level. The punishment would mean a maximum of five years in prison and a $10,000 fine, in addition to any other punishments for criminal acts involved in the hazing incident. Fraternity and sorority leaders would also be subject to punishment for not reporting hazing incidents to law enforcement. The law also applies to elementary and high schools, not only colleges. Social, academic, athletic, and other organizations would be subject to the anti-hazing bill.

H236 Add World Languages/Teaching Fellows Program: This bill would expand the state’s teaching fellows program to teachers earning a license in world languages. The current teaching fellows program recruits STEM students in the UNC system to become public school teachers; this change expands that opportunity to world language and special education students. Teaching fellows can receive a forgivable loan, up to $4,125 per semester, which can cover college tuition, fees, book, and licensure-related expenses. A similar bill, S400, would have expanded the program to include any major as a way to attract more students into teaching.

H305/S360 Amend Law Regarding University Discipline. This bill would establish meaningful due process protections for students facing non-academic university disciplinary proceedings. Protections would include the right to adequate notice of proceedings and the right to cross-examine witnesses. It would also direct university courts to use the same standard of evidence applied in criminal courts for sexual assault convictions. Primary sponsors include Representatives Setzer, Howard, Saine, and Destin Hall as well as Senators Krawiec, Ballard, and Sawyer—all Republicans.

H319 In-State Tuition Equity. This bill would give in-state tuition at public universities and community colleges to immigrant students who graduated from high school in North Carolina and attended an in-state high school for at least two years prior to graduation. It would require illegal immigrant students to file an affidavit with the school stating that they have filed an application to legalize their status or will file one as soon as possible. The primary sponsors of the bill are Representatives Meyer, Fisher, Harrison, and Brockman—all Democrats.

H356 Restore Injured Monument/Prosecution: This bill is a response to the toppling of Silent Sam at UNC-Chapel Hill. It would make “moving or removing the statue or monument from its location” a misdemeanor, which carries a fine of $500-$1,000, as well as restitution for damages. The state would then be required to restore a monument or statue to its original condition no later than 90 days after the event.

H463/S561 Education/Job Readiness in Prisons & Jails. This bill would make need-based financial aid grants available to inmates in North Carolina prisons and jails for up to 10 semesters. It would also grant all inmates in-state resident status for tuition purposes. All courses offered to inmates would have to be approved by the State Board of Community Colleges and must be “tied clearly to identified job skills, transition needs, or both.” Both Democrats and Republicans were primary sponsors of the bill.

S335 University Student-Athlete Protection Commission. This bill would create important protections for student-athletes, including provisions for their health and safety as well as limiting the revenue that colleges can receive from using an athlete’s name, image, and likeness. These protections are based on the recommendations of the Legislative Commission on the Fair Treatment of College Student-Athletes.

The bill would also give out-of-state scholarship recruits in-state status for tuition purposes. This means that North Carolina taxpayer money, instead of private donations or revenues from ticket sales, would pay the way for out-of-state recruits.

S340 NC Skills-Gap Study. This bill would require the NC Works Commission to conduct a study on North Carolina’s expected workforce demand and whether its education supply will meet future demand.

S612 HS Credit/Dual Enrollment Workforce Training: This bill would require the state board of education to revise how it awards dual credit to high school students who complete college courses in the College and Career Promise program and expands articulation agreements with community colleges to make credit transfers easier.

H875 Student Borrowers’ Bill of Rights. This bill would establish a student loan ombudsman in the Office of the Commissioner of Banks and give the commissioner the power to license and regulate student loan services.

Of course, nothing at the General Assembly is written in stone until the session is over. In the past, bills believed to be dead were resuscitated by inserting their language into the budget or even into other bills with unrelated content. With time left until adjournment, anything could happen.

Can Higher Education Be Saved? The Hope for Governance Reform

The Breakdown of American Education and the Hopes for Change

Across Colleges of All Types, Student Anxiety Is a Growing Issue

Did You Know? Colleges Could Lose 1/3 of Students if Fall Classes Stay Online