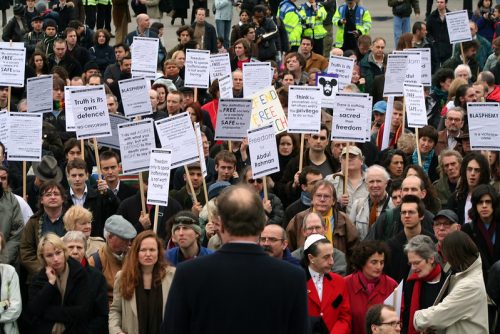 In a new law that will change the direction of higher education in the United Kingdom, the British government is drafting the Higher Education (Freedom of Speech) Bill, which might require universities to defend free speech and freedom of expression.

The British political system lacks the First Amendment protections for free speech like the American system, and this difference is visible in the increasingly hostile higher ed sector—where ideological orthodoxy resulted in a monoculture. The new bill, for the first time in British history, will be used to fill that free speech gap.

The bill ensures that universities and colleges are registered with the Office for Students to stop de-platforming, silencing, or other such ways of intimidation. The bill also makes universities responsible for ensuring the neutral public sphere, as well as requiring student unions to ensure balance and lawful freedom of speech.

Failure to ensure such neutrality or carry out legal duties would result in fines and other punitive measures, such as sanctions.

The bill also requires all registered higher education providers in England to not just ensure free speech and academic freedom, but also promote these values to students.

In a sense, the bill’s supporters are using the same tactics used by universities to justify diversity initiatives and more money for the ideological university bureaucracy. For example, a core set of equalities law were used by previous Labour governments to ensure that universities follow all diversity initiatives or else risk sanctions. The current conservative government is reversing the role, using the same tactic to ensure universities promote free speech and academic freedom.

Given that Britain is a parliamentary system with an unwritten constitution that is based on legal precedents, everything starts with definitions. Accordingly, this bill defines “academic freedom” to be freedom within the law and within their fields of expertise to

The definition clause raised some eyebrows, due to its overly complicated wording, especially with the “field of expertise” clause.

The British left has vocally opposed the measure. Critics have warned that this will ensure a torrent of lawsuits against university admins and radical students. The government is also accused of fomenting a culture war. The ruling conservatives, meanwhile, have argued that such measures are a market correction and that such corrections are necessary to create a semblance of balance in a system already skewed too far to the left.

Britain has been rocked by recent controversies, much like the rest of the Anglosphere. There has been a campaign of silencing initiated against scholars like Eric Kaufmann and orchestrated by student unions that are supported by a section of academics. In another instance, academics in King’s College were angered by an email that had the photo of the recently deceased HRH Prince Phillip, which resulted in an apology from the university administration.

This bill is in effect the first salvo from the ruling conservative government to stall what it considers a steady drift toward ideological conformity on campus. In a way, it follows the American trend where various states have enacted similar legislation.