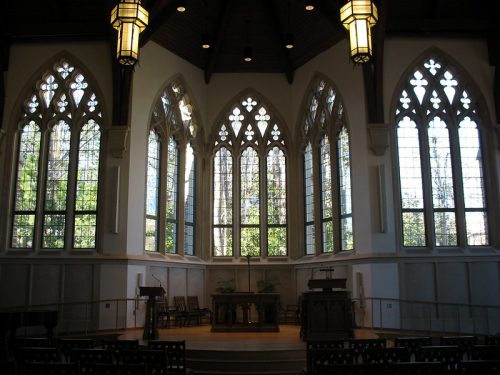 My first year at Duke Divinity is, well, not quite what I expected. For one, I was hoping to take classes in Gothic buildings and worship in the beautiful wood-laden chapel. Instead, I have been at a desk in my less-impressive apartment.

The year was also unexpected in another way. When I told friends I would be attending Duke Divinity, I would get negative or cautionary responses. Many well-intentioned people warned that Duke’s faculty would try to turn me into a Methodist or a Marxist.

Those sentiments echo Rod Dreher in The American Conservative, who writes about one student’s negative views at Duke Divinity. In his article, Dreher shared a current student’s concerns about the direction of the divinity program. Dreher also points out what seem to be some notable instances of wokeness at Duke from faculty and students on Twitter, suggesting that Duke has become “radically divorced from anything like historically normative Christianity.”

Dreher’s concern is understandable given that Duke Divinity has been the subject of controversy since its firing of Paul Griffiths, a conservative faculty member who spoke out against training offered by the Racial Equity Institute (an organization that also offers diversity training for UNC schools).

I like many of the things Dreher has written and appreciate that he also published a rebuttal by fellow Duke Divinity student Ben Davison. In his defense of Duke Divinity, Davison rightfully identifies Duke as a great place to study theology.

Duke isn’t only a great place to study, however. Duke Divinity, despite its past controversies and some current problems, is an example for other seminaries to follow. “Woke” professors and students have not destroyed the institution; their existence on campus shows its commitment to preparing students for the real world and the university’s commitment to academic freedom.

Seminaries are tasked with cultivating ministers who are well-versed in theology, Biblical studies, ethics, missions, and preaching—and can also respond to the issues of our time. These institutions walk a fine line between turning out herds of “woke” wannabe consumers and producing dedicated, principled leaders who care for our communities of faith. Just as the music department gets slammed for not being “diverse” enough, it is no surprise that seminaries come under fire as well. Race and inequality are now a topic at virtually every institution in America.

Though advocates like Dreher have advocated a “Benedict option” of retreating into communities of conservative Christians, few actually follow that path. Instead, most seminaries choose differently and aim for pluralism in their programs.

For most religious conservatives, it seems, the concern is not that ideas like critical race theory or queer theology are being discussed or debated. Rather, it is a fear that at top seminaries like Duke, these ideas are prescribed as truth to young would-be religious leaders. Students, then, are pressured to interpret religion and society through a critical or queer lens. The concern being raised is pedagogical, not political, in nature.

Yet this fear of corrosive “wokeness” in some parts of the academy, does not generally apply to divinity schools aside from small pockets of students and professors. Across the political spectrum, principles like academic freedom, free speech, and Christ-like love rule the day in seminaries. The critical race theory cathedral has not come to fruition.

Seminaries are as varied as churches and denominations. In his article, Dreher suggests that some schools, such as Yale and Harvard, are not moderate and are, instead, havens for leftist radicalism. Perhaps, though this is not a sign of indoctrination but evidence of academic freedom on campuses with progressive political cultures. In fact, some students seek out particular divinity schools for their social justice or theologically liberal leanings.

Congregations are already talking about race and equity. It would be a disservice to churches and future ministers not to prepare them to lead in this area of church life.

“I think those that want a fuller picture (in seminary) have to be intentional in seeking out those on the opposite side of issues to see if reciprocity and dialogue can be pursued and had,” said Justin Cox, a graduate of Wake Forest Divinity School and writer at Black Sheep Baptist, a popular theology blog. He is pursuing a doctorate of ministry at Mercer University’s McAfee School of Theology in Georgia.

“That doesn’t always happen, either in churches or in the academy…if you want to hear a conservative voice in a chapel, you have plenty of schools to choose from,” Cox said. “If you want to experience having your feet washed by a transgendered student on Maundy Thursday you go to places like Wake. For me, I heard enough fundamental/conservative voices from pulpits growing up. I chose the latter.”

“There was one particularly outspoken conservative student that I regularly took classes with and, to my knowledge, he was never targeted or disrespected for his political beliefs,” said Victor Knight, a recent graduate of Yale’s master of arts in religion program.

Unlike Wake Forest and Duke, many conservative institutions like Southeastern Baptist University and those of the Southern Baptist Convention (SBC) have rejected critical race theory, fearing that it shifted the view too far away from a Biblical understanding of human nature.

Though many in the leadership of the SBC do reportedly take issues of racism in society seriously, this decision to abandon the language of many of today’s “anti-racist” activists has caused notable divisions in their denomination. Yet, even students at conservative institutions, like Wheaton College in Illinois, talk in the classroom of racism and sometimes use the jargon of critical theory.

This shows that the issue is not if seminaries should discuss race, religion, and politics, but how and when to discuss them. Congregations are already talking about race and equity. It would be a disservice to churches and future ministers not to prepare them to lead in this area of church life.

If Duke Divinity has taught me anything, it is that the church needs well-rounded leaders who understand complex issues like race, economic class, political division, etc. We need more conversation across the social, political, and theological spectrum. That doesn’t mean embracing critical race theory, but it does mean understanding it.

In the church and the academy, we need saints like Rod Dreher, Curtis Freeman, Valerie Cooper, Kristen Kobes Du Mez, Willie Jennings, and all those mentioned in Dreher’s critique of Duke Divinity. We clearly do not all agree. However, we all have the same goal of producing Biblically based, and Christ-centered leaders who care for our communities of faith.

It seems that Duke is not quite what I expected. Despite the warnings from others, not one person has tried to convert me to Methodism—I’m still not sure if I should be concerned. But more importantly, the professors I have interacted with, as an outspoken and self-identified conservative, have been nothing short of hospitable, kind, and welcoming.

The student body, which is diverse (in all senses of the word), is filled with kind and considerate people who, even in heated debates, do their best to be understanding and Christ-like. The institution is certainly far from perfect. But as a fairly conservative Baptist, Duke Divinity has thus far been a great place to be.

How Colleges Get Rid of Conservative Admins: An Example from UNC