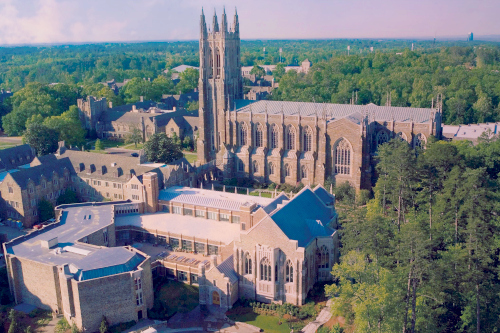 American college campuses are becoming more and more like the old communist states where people enjoyed freedom of speech—but only so long as they didn’t question some aspect of the official orthodoxy. Any such “deviationism” was apt to land them in severe trouble with the authorities, who encouraged loyal citizens to report it. (Alexander Solzhenitsyn recounted many cases of that in The Gulag Archipelago.)

Duke University Divinity School professor Paul Griffiths is the latest faculty member to fall victim to the taboo against speaking out against “progressive” beliefs. His thoughtcrime: daring to say that a “racial equity” seminar would be a waste of time.

Back on February 6, Anathea Portier-Young, another professor in the Divinity School, sent around to the entire faculty an email. It encouraged one and all to attend a program she favored. “On behalf of the Faculty Diversity and Inclusion Standing Committee,” she wrote, “I strongly urge you to participate in the Racial Equity Institute Phase I Training planned for March 4 and 5.” Attending it, she continued, would prove to be “transformative, powerful, and life-changing.”

The Racial Equity Institute is one of those organizations that capitalizes on the “progressive” notion that the U.S. remains a very racist nation and cannot progress unless we “develop tools to challenge patterns of power and grow equity.” Its guiding idea is that “Racism is a fierce, ever-present, challenging force…and dismantling it requires an equally fierce, consistent, committed effort.”

Americans should be free to advance those ideas. But they should be equally free to challenge and reject them. Professor Griffiths has learned that professors on our college campuses exercise the latter freedom at their peril.

Shortly after receiving that email from Portier-Young, he wrote and fired off an email of his own. “I exhort you not to attend this training,” he wrote. “There’ll be bromides, clichés, and amen-corner rah-rahs in plenty,” but the substance of the program would reflect “illiberal roots and totalitarian tendencies.” And drawing a link to the Soviet Union, Griffiths observed that “(re)trainings of intellectuals by bureaucrats and apparatchiks have a long and ignoble history.”

You can read both of the dueling emails here.

The problem, of course, is that leftist pieties about race (and other things) now hold privileged status, much as Marxist theory used to in the communist bloc. To paraphrase Orwell, “All speech is free, but some speech is more free than others.”

Professor Portier-Young was so incensed that she filed “harassment” charges against Griffiths with the Duke Office for Institutional Equity. Has our academic world fallen to the point where a professor who finds her ideas challenged would rather file a complaint than make a counter-argument? Sadly, yes.

Divinity School Dean Elaine Heath immediately excoriated Professor Griffiths. After announcing in her own email that she thought the “training” would bolster the school’s “intellectual strength, spiritual vitality, and moral authority,” she declared that Griffiths had acted improperly. “It is inappropriate and unprofessional to use mass emails to make disparaging statements—including arguments ad hominem—in order to humiliate or undermine individual colleagues or groups of colleagues with whom we disagree. The use of mass emails to express racism, sexism, and other forms of bigotry is offensive and unacceptable, especially in a Christian institution.”

If you can find any hint of racism, sexism, or bigotry in Griffiths’ email, I’ll eat my hat.

The most revealing sentence in Dean Heath’s email reads, “We believe all faculty have a right to speak out as members of a civil academic community, and if all voices are to be heard, diverse perspectives must be valued and protected.” And there’s the idea that destroys free speech—that certain thoughts (“diverse perspectives”) should be given special treatment. They must be “valued and protected,” which Griffiths had failed to do.

It wasn’t really the way Griffiths responded that was the issue, but the fact that he had taunted one of the sacred cows of academic liberalism.

Suppose for a moment that this little drama had played out differently. Let’s say that one Duke professor, after learning that the Ludwig von Mises Institute would be holding a conference (not “training”) on the benefits for poor and minority individuals from a radical downsizing of government, sent around an email suggesting that faculty colleagues would learn a lot from the seminar and even find it “life-changing.”

Another professor reads that email and blast off this reply: “Don’t go to that conference. You’ll just hear a bunch of free-market platitudes from people who pretend to care about the oppressed but only want to push their failed deregulation agenda.”

No Duke official would care in the slightest about that clash of ideas, and properly so. Academics can fight their own battles on even terms.

But when a “progressive” is challenged, free speech is quickly forgotten. Dean Heath set in motion a university disciplinary procedure against Griffiths, charging him with “unprofessional conduct.”

In all such procedures, the process is the punishment, as Northwestern University professor Laura Kipnis makes clear in this article about her ordeal after writing an article that angered some of her militant students. Knowing that, Professor Griffiths decided to quit the Duke faculty at the end of the next academic year rather than battle his inquisitors.

It’s a safe bet that he will be replaced with someone who would never think of questioning the need for training in progressive theology.

Writing about this case for the Wall Street Journal, Peter Berkowitz got to the core of the problem, writing, “At Duke Divinity School, the defense of liberal learning and teaching itself is now beyond toleration.” It’s a bad day for Duke (or any other institution of higher education) when its administration puts the supposed need to “value and protect” certain ideas above wide-open inquiry and debate for all.

How ‘Experts’ Abused Science to Saddle America with the Microaggression Mania

A Broad and Devastating Offensive Against Racial Preferences