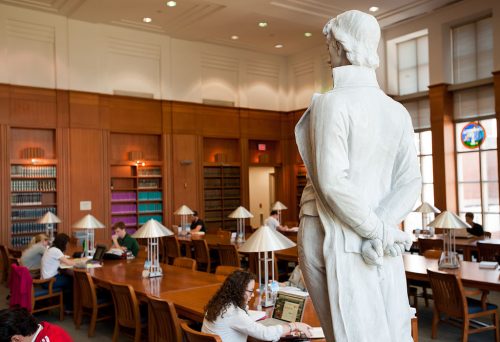 By 2015, we were seeing articles such as this one in the Wall Street Journal: “Fewer and Fewer Students are Applying to Law School.” A number of law schools have closed since 2017, including Valparaiso, Whittier, Savannah, Arizona Summit, and Charlotte. More are on thin ice.

Evidently, many prospective law students were figuring out that the high cost of three years of study necessary to earn a JD just wasn’t worth it in a glutted market and were choosing other paths after college.

Just how right they were is highlighted in a new study by the Texas Public Policy Foundation entitled, “Objection! Law schools can be hazardous to students’ financial health.”

What he’s doing is following the method of the “Gainful Employment” regulations that were in place during the Obama administration. Under those regulations, schools could lose eligibility for federal funds if their average student loan figures were too high compared with student earnings after graduation. (Those regulations were only applied, however, to for-profit institutions, when the problem of excessive debt was also found at many public and non-profit schools. Under Trump, the regulations were suspended.)

So, how did law schools fare?

Shockingly, 73 percent of the schools for which Gillen was able to get data (168 schools) fail.

Many of the schools that failed are smaller, but that doesn’t affect the overall picture very much. As Gillen writes, “An astounding 68% of law school graduates attended a program that fails GEE.”

In other words, a heavy majority of law school graduates will face so high a burden of debt that their schools would have been targeted under the Obama regulations if the regulations had been applied across the board.

In an appendix, Gillen shows how his GEE figures vary across a wide array of academic fields, and law comes in dead last. Even programs in Design and Applied Arts, Social Work, Psychology, Health and Fitness, and English have substantially more “pass” results than in law.

What is going to happen once college students hear about these results, results that loudly confirm their apprehensions about going to law school? Except for the small percentage of schools that are in the “pass” or “probation” categories, enrollments will probably plunge, and the list of defunct schools will increase steadily.

The root of the problem is that law school costs substantially more than most students can afford to finance on their expected earnings after graduation. So why don’t school administrators find ways to reduce that cost? They can and many have nibbled at the edges, for example using somewhat more adjunct faculty and cutting back on library expenses.

The root of the problem is that law school costs substantially more than most students can afford to finance on their expected earnings after graduation.

Such nibbling, however, doesn’t cut very much. The big problem is that under American Bar Association (ABA) accreditation rules, law school has to be a three-year program—90 credits. A law school could lower the cost of getting a degree tremendously if it could allow students to graduate with, say, 60 credits. It would focus on the courses that are most important for the bar exam and subsequent legal practice. Many students would find that prospect attractive.

But if any school did that, it would lose its ABA accreditation. And that would be fatal in most states since no one is permitted to take the bar examination without first having graduated from an ABA-accredited law school. North Carolina is among the 44 states that require a degree from such a law school. There are good reasons to change the law.

The very high cost of law school is no problem for those graduates who find high-paying jobs, but most of America’s legal needs don’t come from wealthy people and big business. They come from ordinary people who are poor or middle-class. But they don’t have the means to pay lawyers hefty fees to handle their cases, and that often means that they have to go without an attorney.

Stanford University law professor Deborah Rhode has long recognized that we have a serious access-to-justice problem in the U.S. She is quoted here as saying, “We are overlawyered and under-represented…In this country, over four-fifths of the legal needs of the poor are unmet and half of the legal needs of people of modest means are estimated to be unmet.”

The main reason for that problem is the cost of law school. Many lawyers can’t afford to work with poorer clients and that will become a more pronounced problem as enrollments fall and schools go out of business.

The ABA’s high cost, elitist vision of law school needs to give way to a free market in legal studies. North Carolina ought to be a path-setter in this regard. It should change its law to permit individuals to take the bar exam whether they have graduated from a traditional, three-year, accredited law school, attended a non-accredited law school, or merely “read law” as Abraham Lincoln did.

Many lawyers will privately admit that law school was mostly a waste of time and money, and a few will say it in public. For instance, Hans Bader writes here that

I learned more law in two months studying for the bar exam than I did in three years in (Harvard) law school, including basic principles of law (in real estate and family law) that I was never even taught in law school.

In response to the Covid-19 pandemic, a few states have even waived the requirement of state bar membership for people to practice law. That might sound risky, but bar membership is no more a guarantee of legal competence than accreditation is a guarantee of quality in a college or university.

Gillen is to be congratulated for having put hard numbers behind the mass of anecdotal evidence to suggest that law school is far too costly in relation to the earnings that most graduates can expect. Since the ABA is unlikely to change its standards, it’s up to the states to release legal education from its shackles.