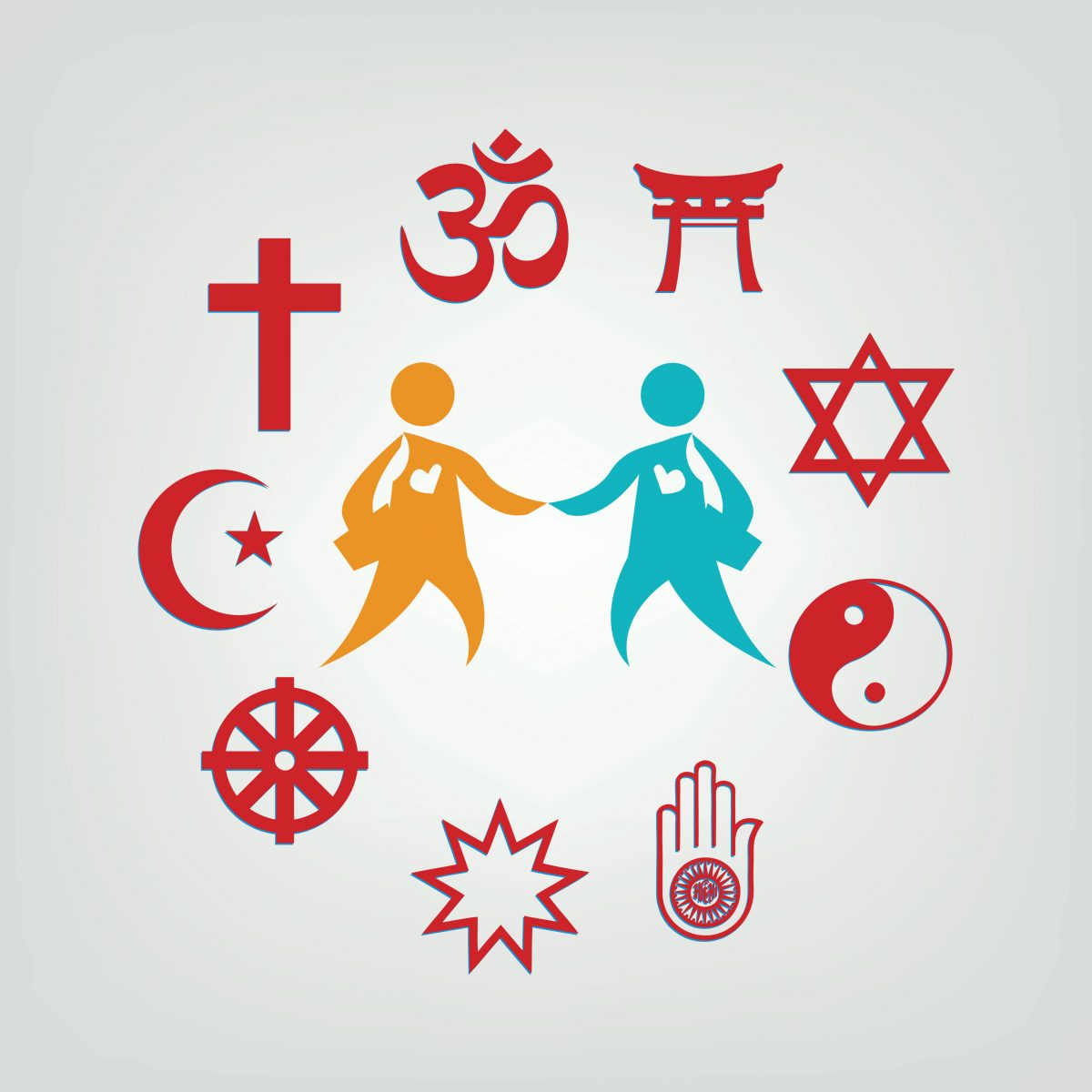 Across higher education, campuses have changed how they deal with religion. It used to be seen as something at odds with academic freedom and science. Now, however, some campus administrators and advocates want students to learn more about religion, and to see policy changes on the institutional level.

One argument is for colleges to teach religious literacy because it’s a vital career skill. Another sees religion as an equity issue like race and gender, and colleges need to make religious accommodations for students to create an inclusive campus. The influence of both arguments isn’t likely to go away soon, either.

One camp has an eye toward student earnings. Religious literacy pays off in the marketplace, advocates argue, because students will work with all sorts of people. Graduates will be better coworkers and managers when they know something about different Christians, Jews, Muslims, and atheists. And employers will pay better wages.

Whether students develop those career skills through religious literacy activities, though, isn’t so clear.

The other camp is interested in religion at the institutional level, as part of diversity and inclusion on campus. Colleges, they say, have a duty to welcome religion on campus and make students comfortable. On one level, it means accommodations such as prayer spaces, excused class absences, and meal options that respect religious restrictions. Another level is social change to fight what they call Christian supremacy and systemic oppression.

The economic argument is pushed by the Interfaith Youth Core (IFYC), a nonprofit organization that works with religious and secular colleges, doing research, offering program grants, and running events and training for students and campus staff. It boasts on its website that it’s “building a network of over 100,000 aspiring interfaith leaders on more than 600 U.S. college and university campuses.”

The changing demographics of our nation require nearly every American adult to possess skills to bridge religious divides. Research from the Public Religion Research Institute specifically underscores the relevance of religious diversity in the workplace, indicating that most Americans encounter religious diversity at work far more frequently than in other facets of their lives. Employers are therefore emphasizing the need for a workforce that possesses strong civic knowledge and intercultural skills, and whose members are equipped to solve problems with people whose views differ from their own.

Advocates such as IFYC and interfaith workers want more institutional investment in their efforts, citing a lack of knowledge among students, even compared to a generation ago. In IFYC’s IDEALS report, the group suggests colleges:

Inroads are being made with the argument that religious literacy is a job skill.

“This is the argument that is so essential,” said Ellie Thompson, the Reflection Center coordinator at Utah Valley University, an area where students can pray, meditate, and gather for interfaith events. Tying educational gains to economic gains matters to boosters and campus staff alike.

If college leaders aren’t persuaded by the job skills argument, they might come around to keep international students happy. “How do you get administrative buy-in?” Thompson said. “There’s lots of different tactics to take, but administration always pays attention to the money.” It’s essential to make international students feel like they belong on campus if colleges want them to stay. “We want every single person who walks on our campus to feel like there is a place they feel like they belong,” she said.

More and more colleges are taking action, either by required courses or extracurricular activities.

The University of Michigan, for example, is developing virtual training modules on interfaith cooperation. Utah Valley University offers interreligious, interfaith, and worldview workshops to faculty and staff. More than 120 campuses included interfaith themes as a part of a required course, according to an IFYC survey, 21 of which were public universities.

In a classroom setting, these courses can be more meaningful than a one-off session. “It’s a lot more robust when it’s part of the required curriculum,” said Michelle Lelwica, a professor of religion at Concordia College in Moorhead, Minnesota. “Students are going to be required to gain some knowledge about religions other than Christianity, but they’re going to have to engage with each other.”

“This would be something that public colleges would do well to do something about—to have some kind of required engagement with religious diversity,” Lelwica said.

Outside the classroom experiences can still benefit students, Lelwica noted, but it’s easier to avoid issues of real difference and fall into platitudes like “all religions believe the same thing.”

The economic argument for religious literacy may not be that strong, though. Employer surveys do show that they want students who can work in teams and communicate well. Listening skills, attention to detail, and effective communication topped one survey, and a ZipRecruiter analysis of entry-level job listings emphasized customer service, sales and marketing, and consulting experience as well. Employers want to hire college graduates who communicate well, solve problems, and work well with others. However, they aren’t yet demanding graduates have interfaith experiences. Knowing how to avoid offending someone in the workplace is a good skill to have, but it might not get workers a hiring bonus.

Religious literacy classes and interfaith activities aren’t necessarily how students develop those skills, either. The official, structured events may do less than informal socializing that gets students to learn about what their friends believe. Left alone, students already show high regard for religious differences.

Interfaith Youth Core’s IDEALS report noted that 90 percent of students said they “feel a sense of goodwill toward people of other religious or nonreligious perspectives.” Another 70 percent said they were “highly committed to bridging religious divides” by their senior year. Students may not understand precisely what their Shia or Baptist coworkers believe in, but they try to treat them well.

A better knowledge of religion in America is a laudable goal, but students lag in their religious knowledge just as they lag in their knowledge of history. It’s an open question whether more religion classes would develop job-friendly communication skills better than more history, English, or public speaking classes.

When religion on campus is an equity issue instead of an economic one, the focus shifts from student learning to identities and minority groups. Students deserve the chance to keep their grades up without violating their religious beliefs, but the advocacy can be polarizing and move beyond academic concerns.

“To foster a well-rounded and global student, you can’t just ignore these identities,” said J. Cody Nielsen. Nielsen is the executive director of Convergence on Campus, a nonprofit organization that supports religious, secular, and spiritual diversity on campus.

“Administrators in higher education have been seemingly let off the hook and not held responsible for fostering campus climates that are equitable, inclusive, and are structurally designed and built” for all students regardless of belief, Nielsen said.

Convergence on Campus was designed as a social change organization, Nielsen said, to look at institutional practices and create an equitable environment.

“We have said from the beginning that marginalization of religious minorities and non-religious identities in higher education is always and always has been systemically racist and colonialist,” Nielsen said.

“It [comes] back to sort of religious literacy and understanding that secularization and claims around separation of church and state are inherently optical illusions of white Christian supremacy and white Christian privilege that exists,” Nielsen said. “And then, once we cross those barriers, working with diversity and inclusion officers, if they can grasp at that…then we start working on institutional policy changes.”

Some of those policy changes are relatively simple, such as

Students have Constitutional rights to practice their religion without interference or penalties from their college. Those rights apply to Catholics as much as Hindus, agnostics, and all other spiritual identities.

Convergence on Campus has made notable progress. Nielsen pointed to a 2019 law in Washington state that mandated a religious accommodation policy be added to all syllabi at colleges and universities. They are tracking similar bills and, were it not for COVID-19, a few more states would have passed similar laws, he estimated.

“We’re about promoting equity,” Nielsen said. “We want to foster an area of what we see as very transformational, or at least aspirationally transformational possibilities in society. We want to turn that field of higher education into a vessel that on every corner of the campus any student…knows that their identity is valued and seen on campus.”

People who are not politically progressive may be less excited to use higher ed as a vessel to fight all social ills, however. Making religion a part of diversity and inclusion would mean expanding the power of campus administrators, who are overwhelmingly on the political left. If religion becomes another diversity checkbox on campus, it may be something a progressive Lutheran would enjoy more than a conservative Evangelical, though both would appreciate religious accommodations for all.

The model followed by Convergence on Campus and, to an extent, by Interfaith Youth Core sees colleges and universities as places for social change. It’s a place to create leaders for the future and to power “transformative social movements.” But students are generally more interested in getting a good job or learning something about the world, rather than serving as the activist vanguard for campus administrators.

Editor’s note: A quote by Michelle Lelwica has been updated for clarity.