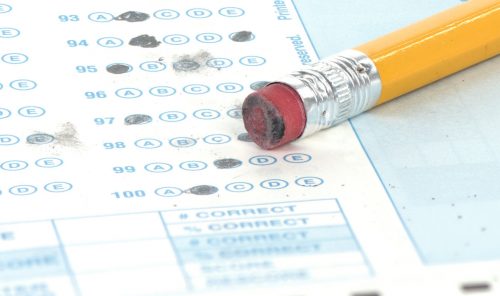 The COVID-19 pandemic probably won’t kill the SAT, but will no doubt leave it in a badly weakened condition.

Both the SAT (and its close competitor, the ACT) have had to cancel administration of their tests for the last few months and, according to this Washington Post story, universities have decided that they will make their admission decisions without those test scores.

Before COVID-19, support for standardized testing was already eroding and recent developments are sure to cause further slippage.

Undoubtedly, the greatest blow was the decision by the University of California (UC) system to stop relying on standardized tests and develop a new test of its own within five years. One opponent of standardized tests (quoted in this Los Angeles Times piece) declared that this marks “the beginning of the end” for the SAT.

Under the plan, UC schools will be “test optional” for incoming students this year and next. For the following two years, UC institutions would be “test blind” for California residents, meaning that SAT and ACT scores would not be used at all, although out-of-state students could still submit scores. And by 2025, the state will either have developed a completely new admissions test or, if no such test has been approved, the UC system will go completely test blind.

Many who say that the standardized tests are unfair and pose a huge obstacle to a truly equitable admissions system are gleeful. Xueli Wang, for example, a professor at the University of Wisconsin, stated that California’s suspension of standardized testing is “a monumental step” toward “diversity, equity, and inclusion.”

What is so bad about using standardized test scores (always in addition to other information about the student) in deciding which applicants to admit?

One argument is that the SAT and ACT are unfair because affluent parents can afford to spend money on coaches and materials that will help their children do better on the tests. There may be a kernel of truth in that argument, but not much more than that.

In a recent essay on Education Next, Jack Buckley, president of the testing firm Imbellus, wrote that “evidence fails to show that the ecosystem of test prep providers, consultants, and coaches does much more than profit from parental anxiety. Moreover, both major testing companies that oversee SAT and ACT have introduced free test-prep material in an attempt to offset any advantage of test preparation, although the efficacy of such offerings is unknown.”

He’s correct; prepping for the SAT or ACT has, at best, small marginal effects. If you really don’t know much about math, a few hours with a tutor isn’t going to improve your score much. If prepping for these tests really made a big difference, all the parents who were implicated in the Varsity Blues scandal—employing out-and-out fraud to get their kids into prestigious schools—wouldn’t have needed such tactics.

The standardized tests have also been attacked as being culturally unfair, using some questions that students from poor families probably wouldn’t know, such as an analogy where the meaning of “regatta” was crucial. But is that a good reason to abandon the tests? The companies that produce the tests have long been aware of the cultural bias problem and have dropped questions that were clearly unfair, a point noted by the UC Faculty Senate in a lengthy analysis of the SAT that opposed dropping it.

Moreover, the supposed cultural bias of the standardized tests doesn’t explain why so many low-income immigrants do well on them.

In his May 25 Wall Street Journal column, Jason Riley quotes Wenyuan Wu of the Asian American Coalition for Education: “What about those Chinatown kids whose parents toil in ethnic enclaves with low incomes and tremendous language barriers?” Supposed cultural bias in the tests doesn’t keep them from scoring very well and securing admission to the top California universities in high numbers—13.6 percent of the state’s population, but 29.5 percent of the undergraduates.

Moreover, the supposed cultural bias of the standardized tests doesn’t explain why so many low-income immigrants do well on them.

Nevertheless, the University of California has decided to abandon the SAT and come up with its own test, which led to a flurry of commentary from educators on the ideal replacement for the old tests. A May 26 Inside Higher Ed story entitled “Experts consider how a new admissions test could change higher education” gave a window into the thinking of “progressive” educators.

In that story, Johann Neem, a professor of history at Western Washington University, argued that colleges should “rely on holistic measures of student ability” and that “no single test can substitute for the careful evaluation of students’ records, developed over time, in different contexts.” Neem advocates having colleges assess student eligibility simply by determining if the individual has the reading, writing, and math skills to do college work—no scores of percentiles, but just a yes or no decision.

Apparently, it does not trouble Neem that his “yes or no” approach would lead to student bodies where there’d be an enormous range of capability among students. That would cause further pressure on professors to lower their standards.

Professor Mary Papazian of San Jose State would create a test where “the questions allow all students the space to reflect on their diverse life stories and experiences. The approach to the new test should be to help students show what they know and can do, to show their potential.”

That sounds nice, but it opens the door to evaluators of the student responses favoring some students over others not because of academic ability, but because of their “diverse life stories.”

Lynn Pasquerella, president of the American Association of Colleges and Universities, wants to see the development of “a universal portfolio system that allows students to gather evidence of learning proficiency over time,” including their “authentic work they identify as most representative of their learning gains.” Such portfolios would be evaluated by “scorers trained to assess higher-order thinking, communication skills and the capacity for intellectual growth.”

She reveals her true agenda by adding that this system would address “persistent equity gaps and the growing economic and racial segregation in higher education.” In other words, college should be a tool for promoting group equality, not individual excellence.

That’s how most admissions people look at their job. Their overriding concern is to advance “social justice” (as they see it) by ensuring that more students from “underrepresented groups” are admitted to top colleges. Supposedly, getting into schools like Harvard, Berkeley, and UCLA will mean better life outcomes for those students, thus reducing group inequalities.

College admissions officers today have come to see it as their responsibility to right the wrongs of society. They believe that African Americans, and to a lesser extent Hispanics, have been the victims of systematic racism, and that colleges must contribute to a more equal society by admitting disadvantaged minorities in greater numbers than their individual achievements might warrant.

The kind of new “testing” that people like Neem, Papazian, and Pasquerella have in mind is perfectly suited to giving admissions officers carte blanche to choose students who strike them as deserving simply on account of their backgrounds.

But such a system won’t be free of “bias” or the influence of money. Well-to-do families will quickly figure out how to game the system with carefully crafted “portfolios of authentic work” by their children that will hit all the right notes with admissions officers who believe that they must help the college promote social justice. In consequence, schools will drift further and further away from the ideal of providing a rigorous education for all.

An argument can be made that we need to improve our admission testing, but rather than obsessing over “diversity” the right approach would seek to identify those students who are truly ready for and interested in learning. That element of homogeneity should be what matters, not the happenstances of ancestry or the ability to strike politically correct poses.