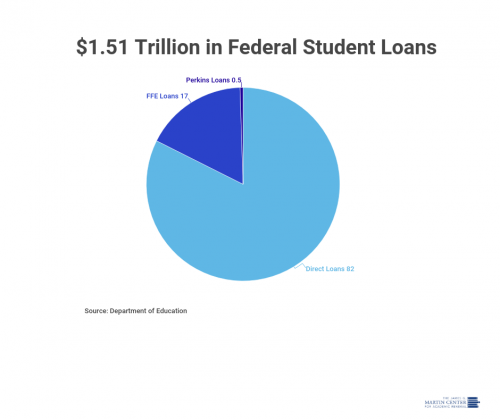 With the hyperbole inherent in a politicized topic like student loans, it’s important to step back and look at the data. The Department of Education recently published a quarterly report of the federal student loan portfolio with updated totals and information on what student debt looks like today.

As of January 3, 2020, the federal student loan portfolio total is $1.51 trillion. The majority of those loans, 82 percent, are direct loans to students, another 17 percent are federal family education loans (such as parent PLUS loans and Stafford loans), and federal Perkins loans comprise less than .5 percent.

Overall, loan applications have fallen by about 3 percent last year, continuing a trend that started in 2011. The population of high school graduates has dropped, and colleges have received fewer incoming students as a result.

For current borrowers, though, income-driven repayment plans, wherein payments are determined by a borrower’s income, have grown in popularity. They saw an 8 percent increase since last year. Those plans help borrowers avoid defaulting on their loans by taking some financial pressure off them if they’ve fallen on hard times and cannot meet their monthly payment requirements.

Loans in default, meanwhile, have slightly increased compared to a year ago: 260,000 borrowers entered default, accounting for $6.3 billion in outstanding debt. Most loans don’t reach default unless a borrower has failed to make a payment for 270 days.

Some borrowers have found relief by getting their loans discharged. About 48,000 applications have been approved, resulting in about $535 million in loans being discharged. Borrowers can apply to have their loans discharged “if a college or university misled them or engaged in other misconduct in violation of certain state laws,” the Department of Education reported.

Other borrowers have attempted to get their loans forgiven through the public service loan forgiveness program, but relatively few have been successful. Borrowers who work in a service job (usually a qualifying government or non-profit job) full-time for a decade while making 120 qualifying monthly payments can have the remainder of their balance forgiven. About 110,000 borrowers have applied for forgiveness, but 74 percent were ineligible, and another 24 percent need to submit more information for the Department to approve or deny their application. Only 1,561 applications were approved, forgiving $71.9 million in loans for 1,139 borrowers (some borrowers had multiple qualifying loans).

It’s important to keep in mind that not all young people have student debt. Of young adults ages 18 to 29, 34 percent have some student debt. Most of those students aren’t drowning in debt, either. Median debt for borrowers with less than a bachelor’s degree was $10,000 in 2016 and $25,000 for borrowers with a bachelor’s degree. Postgraduate degree holders had $45,000 in debt, but those borrowers also tend to have the highest incomes.

While the total amount of student loan debt looks truly eye-popping, the public needs to keep in mind that the $1.51 trillion is spread among hundreds of thousands of borrowers.

Did You Know? COVID-19 Budget Cuts Hit Students and Profs, Not Admins