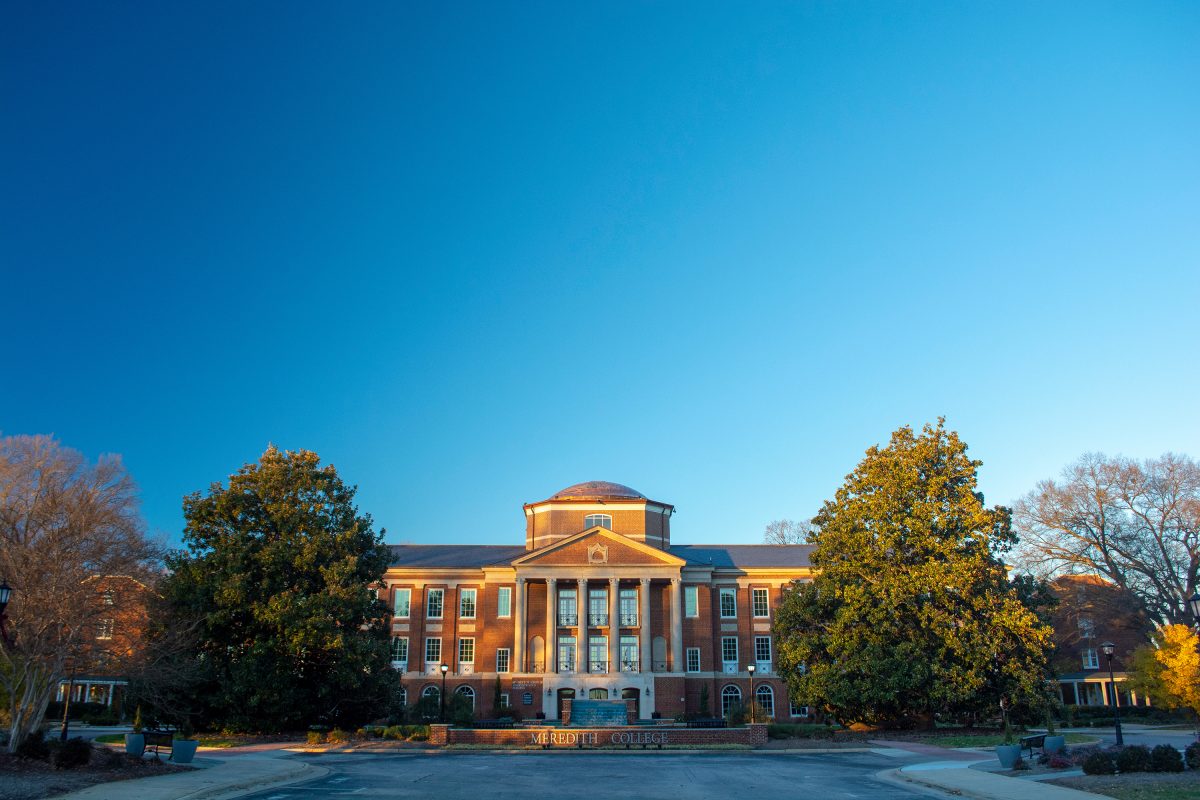 Has Meredith College gone woke? When comparing the school’s history and original vision with its current happenings, the answer is a resounding “yes.”

Founded in 1899, Meredith College–originally the Baptist Female University–opened as a female, Christian school, intent on academic excellence. The founders wished to provide female students access to the same quality of education being offered to male students at the time. The 1899 catalog of the Baptist Female University states about the school, “Its first intention is to provide, not simply instruction of the noblest and most thorough sort but instruction made perfect in the religion of Jesus Christ.”

Meredith College has been known for supporting female education, intellectual freedom, and valuing academic excellence. Aside from being an all-women school, it is perhaps most well known for its education degree program, producing many licensed teachers for the state of North Carolina and beyond.

But what once was seen as a wholesome, well-rounded school for women is rapidly changing.

While there have been multiple iterations of Meredith College’s mission throughout its existence, the first description of the school’s purpose that most reflects a modern understanding of a mission statement was published in 1959. It stated that Meredith College’s mission was, “to provide for the higher education of women under Christian auspices and within a Christian context, fostering in all its activities and relationships the ideals of personal integrity, intellectual freedom, and academic excellence.” The value placed on Christian education, personal integrity, intellectual freedom, and academic excellence remained relatively unchanged over the years.

However, around 2010 the mission statement was updated to read:

In educating women to excel, Meredith College fosters in students integrity, independence, scholarship, and personal growth. Grounded in the liberal arts, the college values freedom and openness in the pursuit of truth and, in keeping with its Christian heritage, seeks to nurture justice and compassion.

The Christian values that once held most prominence in the school’s ethos became more of an afterthought, and increasingly so in the most recent version of the school’s mission published in 2013. Today, the school states that “religious diversity” is among its core values, “Religious diversity…avowing the College’s Christian heritage while respecting all faiths and spiritual beliefs[.]”

While support of religious diversity is not a bad goal or statement, it does call into question the stability of the school’s standards as a whole. This major shift from the school being of a Christian/Baptist origin to now not affiliating with any religion makes one wonder if similar shifts are also taking place with the school’s other original missions. Should students and faculty be concerned about whether the school still values personal integrity, intellectual freedom, and academic excellence since the central goal of providing an explicitly Christian education has disappeared?

A quick look at Meredith’s website gives a pretty clear answer: yes, there is cause for concern. The latest news from the school’s website points to the adoption of the “woke” agenda. When referencing a university or college website, one would expect to see information about the degrees offered, how the school ranks among others, the rigor of its classes, and perhaps even some “perks” for attending the school (why should I choose this school over another?). Upon visiting Meredith’s website, however, one is met with announcements about its anti-racism initiative, the changing of a building name because of the namesake’s history, and the hiring of a new DEI coordinator. It’s clear that the school’s focus is shifting.

In recent years, focusing on “diversity, equity, and inclusion” (DEI) has become increasingly popular at universities. Earlier this year, the Martin Center released a report detailing the infiltration of “Critical Social Justice” and DEI in the UNC system, which clearly tracks with other North Carolina schools— including Meredith College. In January of this year, Meredith College welcomed a new employee: a DEI coordinator. The anti-racism initiative, which is prominently advertised on the school’s front page, is broken down into three “action steps.” Some of the initiative’s goals are to ensure that its policies aren’t “unconsciously contributing to systemic racism,” or “Identify racism at Meredith through the lens of our history and current students.” “The College is actively addressing diversity, equity, and inclusion efforts in all departments and administrative processes,” the website states.

A shift of focus such as what can be seen at Meredith College leads to a myriad of concerns. First, there is the concern of finances and how well (or poorly) they are being managed. When schools are already working under a limited budget, expenses such as creating DEI offices and hiring employees seem unnecessary and frivolous.

Second, are there shifts in other areas such as the quality of education? Does this new emphasis on DEI affect the content of courses and is it required study for each student? There is at least one class that appears to have a direct focus on DEI. Entitled Social Work-200 Human Diversity and Social Justice, the course description reads:

Students are introduced to the concepts of prejudice, discrimination, oppression and social and economic injustice and to the processes by which these are imposed upon some populations based on age, class, color, culture, disability, ethnicity, family structure, gender, identity, marital status, national origin, race, religion, sex, and/or sexual orientation. Methods to combat prejudice, discrimination, and oppression and to restore social justice will be considered.

The course is required for social work majors.

While the intent behind DEI doesn’t initially appear to be to stifle thought— after all, the very words in the acronym all sound supportive and inviting— the result of schools publicly supporting this ideology and integrating it into their curriculum can result in students feeling they need to either conform or leave.

If students see that their school is publicly supporting one-sided arguments, it’s likely that they will feel discouraged from expressing differing ideas. A report published by the Heritage Foundation validates this concern. It found that the increase of focus on DEI does not improve the student experience on campus. Instead, it causes more division as DEI staff tend to be, as the Heritage Foundation puts it, “a signal of adherence to ideological, political, and activist goals.”

The university’s primary focus should be on educating students and preparing them for the challenges they will meet in the world. The job of a university is to teach students to be independent thinkers, provide them with opportunities for growth, and encourage them to be better citizens. There is no room in the university’s mission to pander to culturally expedient aims or to virtue signal its commitment to DEI while neglecting the true purpose of higher education.

Students, parents, faculty, and stakeholders should be concerned about these signs of “wokeness” showing up in schools, including Meredith College. These types of changes in mission happen gradually but should not go unnoticed as the results can be detrimental to educational quality and the true freedom students feel to express new and differing ideas.