Public higher education was once America’s great enabler, permitting young people from lower-class backgrounds to attend college for very little money and to rise as far as their abilities and drives would take them.

That may no longer be the case, according to economists James Koch and Richard Cebula. In their 2020 book, Runaway College Costs: How College Governing Boards Fail to Protect Their Students, they claim that “[p]ublic higher has evolved into an engine that accentuates rather than reduces social and economic inequality.”

The main reason, they posit, is that the price of attending public universities has increased considerably over the last few decades, particularly when compared to other factors. Tuition and fees at public institutions of higher education rose 135 percent (adjusted for inflation) from 1992-1993 to 2017-2018, faster than other sectors. “Between 1999-2000 and 2017-18,” they write, “the average number of hours a typical nonsupervisory worker had to labor in order to pay average annual tuition and fees at a public four-year institution increased from 224 to 446.”

Because of these and other phenomena—such as the student loan crisis—the social mobility promised by public higher education is diminishing, according to the authors.

The authors debunk the common excuse for tuition increases at public universities, that cuts in state appropriations have forced schools to make up for the loss of revenues by charging students more. From 1992-1993 to 2017-2018, state appropriations fell by 20.1 percent—but public colleges wound up with 41.2 percent more money to spend per student (from combined appropriations and tuition and fees).

As the authors suggest, much of the increase is not because schools must raise tuition—but because they can.

They consider higher education to be a “trust market,” with the customers forced to trust that they are being sold a quality product at a reasonable price. Board members have a fiduciary duty to ascertain that they receive one. In that regard, they are failing, according to Koch and Cebula. They cite “Bowen’s Rule,” a mechanism defined by economist and former college president Howard Bowen, which partially explains why academia suffers constant cost increases:

Koch and Cebula place the responsibility for this trend squarely on the desks of those who are supposed to be looking out for society and the students—on the universities’ governing boards.

“It appears that 99 percent of all administrative proposals to increase tuition and fees are unanimously approved by public college governing boards,” they write. A hyperbolic statement, certainly, but it captures the dynamic between boards and school presidents accurately. Boards are supposed to be the ultimate authority in public higher education, but “it is not clear who is really in charge on the typical American public college or university campus,” the authors explain. 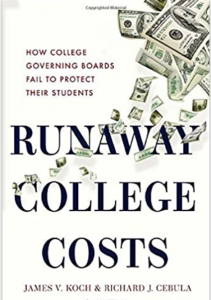 They attribute much of this deference to administrators to the “charisma” of presidents. Trustees are “wined and dined” and flattered by schools; “satisfied trustees less often challenge ideas coming from the president’s office … [m]ost trustees buy into the president’s narrative about what the institution is.”

Koch and Cebula also mention the reason most often cited for administrative dominance of the board: the ability of administrators—who are usually lifelong academics intimately connected to every campus operation and every stakeholder group—to control the information given to trustees, who function on a part-time basis and are from outside academia.

The authors, however, show some concerning ambiguity regarding administrators’ position at the center of communications, as they both call for trustees to be more inquisitive and assertive on one hand, and on the other to “require that their president be the conduit for all proposals coming from the campus.”

One chapter is devoted to making an argument based on statistical regression analysis (the authors are, after all, economists). This attempt to gain understanding through quantification is one of the great strengths of the book, for higher education governance is sometimes regarded as some sort of black box in which policies produce results that are not only hard to quantify, but also defy analysis. There is an element of truth in this observation, as measures that quantify learning outcomes accurately have proven generally elusive.

Even so, Koch, who was formerly president of both the University of Montana and Old Dominion University, and Cebula, who has taught at Emory and George Mason universities, manage to provide insight from this empirical exercise. For one, they examine this long-term pattern of increasing tuition in light of different governing structures. Four “testable hypotheses” they used for governance structures were: whether board members were largely appointed by state governors, whether they were popularly elected, whether boards had student members who could vote, and the board size.

Three of the hypotheses had no significant effect on the rise of tuition. The size of boards was the one that mattered, with larger boards more lax in fiscal matters. The authors surmised that members of larger boards are less engaged with each other and therefore more easily manipulated by administrators.

An additional finding was that statewide or system boards that oversee several campuses tend to hold down tuition and fees more than boards for individual institutions.

Koch and Cebula “found that between 2003-04 and 2016-17, net real tuition and fee increases per full-time equivalent student were $1,148 higher at own board institutions than at institutions subject to a statewide governing board.”

Koch and Cebula assume that members of statewide boards tend not to have the same sort of emotional ties that alumni trustees of specific schools have, so that they are less receptive to the administration’s wishes and less likely to consider themselves advocates for their school. They may instead consider themselves to be representatives for the state’s taxpayers.

Own board institutions, on the other hand, tend to look out for the school more and raise tuition aggressively. They “pursue admissions and financial aid policies that, over time, put them out of the financial reach for many of the very citizens who pay taxes to support them.”

A second series of regressions attempt to capture the effects of tuition increases on educational quality. The authors summarized their findings: “we found no strong positive connection between the substantial increases in real tuition and fees per FTE that occurred between 2003-04 and 2016-17 and the measures of quality and performance.”

Part of the problem is the choice of measures of quality. Standards such as graduation and retention rates tend to be closely correlated with inputs such as SAT scores and family incomes, rendering the effect of tuition insignificant.

The size of boards was the one that mattered, with larger boards more lax in fiscal matters.

A related observation from the regression analysis is that system boards are correlated with lower performance on the measures of education quality. The reasons for this are unknown; Koch and Cebula write that [m]ore research on this issue is needed. One likely explanation is that, since the performance measures are strongly correlated with inputs such as admissions selectivity, it is not actual educational quality being measured.

The second half of the book focuses on recommendations for reforming board oversight. Calls for boards to be refocused on high-level purposes such as their fiduciary duties and school missions are difficult to dispute; the same with suggestions that board members should be selected and trained better. Another strength of the book is its emphasis on the role played by incentives; Koch and Cebula make altering the incentive structures for college presidents a high priority since today’s college administrators are overly focused on prestige, aggrandizement, and avoidance of controversy instead of tackling problems head-on. More specific reform suggestions such as “prune the curriculum,” “control amenities,” and “increase transparency” are also commonsensical.

Perhaps their most important suggestion is that boards continually ask questions and “make continual efforts to evaluate what the institution is doing” instead of assuming that everything is functioning as it should.

It is up to the trustees to identify “transcendent values” and create incentives supporting them.

One concern is the lack of attention paid to serious discussion about how to alter the course of an institution that grows increasingly set on its current path. Koch and Cebula are academic insiders; lead author Koch was, after all, the president of two public universities, and the book gives a feeling that their reforms can be implemented through the discourse of reasonable people. They believe that board members can “nudge administrators, faculty, and staff (and occasionally students) to deal with important issues or to confront reality.”

Given higher education’s tendency to defy even moderate reforms, “nudging” may not be enough. Rather, reforms are likely to occur only as a result of brutal political battles.

All in all, though, Koch and Cebula have made a valuable contribution to the literature on board governance by conducting empirical investigations, something few have been able to do successfully.

Runaway College Costs frames the problem of board governance in such a way that others may be able to use it as a jumping-off point for further inquiry.