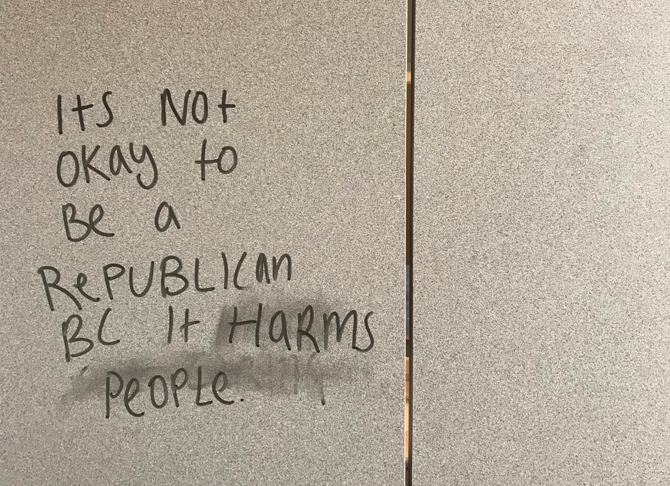 I am so grateful for and blessed by my time at the University of North Carolina at Chapel Hill. However, I am keen to the reality that my political foundations differ from the vast majority of my Tar Heel peers.

It is alienating to be a conservative in Chapel Hill. In many of my classes, the word “Republican” holds the same weight as the word “Duke” at best or “racist” at worst (as a classmate directly told me). In a bathroom stall in Lenoir (the main dining hall on campus), someone etched the words “It’s not okay to be a Republican because it harms people.”

That atmosphere makes me second-guess myself. Last fall, I threw on my Reagan-Bush sweatshirt before heading to a coffee shop to Zoom into class. I then panicked and kept my camera off, fearing that my sweatshirt might draw unwanted attention or backlash from a classmate or professor.

At UNC, Democratic professors outnumber Republican professors 12:1—and 16 of our school’s departments do not have a single Republican professor (including my major, public policy). While I recognize that academia generally leans left and UNC is not an anomaly, the lack of diversity of thought is still concerning. I think differences in opinion are beautiful and essential to a functioning democracy, as well as for a well-rounded education. An intellectual monoculture suggests that UNC is not giving students the education they deserve, whether they are on the left or the right.

That monoculture also discourages me from being open with my peers. Last summer and fall, I was employed by the North Carolina Republican Party as a judicial assistant. Essentially, I was tasked with the campaigns of the eight conservative state-wide judicial candidates—three for the NC Supreme Court and five for the NC Court of Appeals. The “Right Judges” (as we fondly called them) ran on a novel campaign model of a joint ticket. Although their individual seats do not affect one another, the idea was that the candidates would campaign for one another. The eight judges became friends, and I was grateful to have a front-row seat. Yet, despite my positive experience at the NCGOP, I hesitantly answered the “what did you do this past summer?” question. I deflected, avoided, and blatantly lied (twice) for fear that someone might draw the wrong conclusions.

The brunt of the intolerance I have felt has not been from my overwhelmingly left-leaning professors, but from other students. From my first day at Carolina, I recognized the liberal ideology that students were expected to conform to. The student culture demands assimilation while calling it openness and acceptance. I think that professors are generally wary of directly condemning a position, but students are not. If a professor would give a student a lower grade due to their political beliefs, or publicly demean a student, they could be fired for discrimination. Meanwhile, students have the freedom to share their opinions more aggressively or to humiliate their peers. In the name of a liberal arts education, professors and the student body ought to applaud genuine diversity of thought. Instead, they stigmatize it.

I live with eight of my closest friends. All eight are Democrats. Actually, only a handful of my close friends at UNC are not Democrats. I attended BLM marches last summer because racial equality is not only a liberal concern. One of my brothers is black, so the recent political climate has affected my family greatly. All that is to say, I have not buried myself beneath a blanket of conservative comfort.

But I firmly believe that there is danger in the binary stereotypes of political parties. When I mention my political allegiance, people automatically conjure their own meanings of “Republican” and “conservative.” If bathroom graffiti talked about how it is not okay to be a Democrat, UNC would make national news for its toxic, intolerant culture. But that message—telling me that I’m harmful simply because of the truths I hold—received no attention. Black and white thinking of “Republicans are bad, Democrats are good” or vice versa threatens diversity of thought.

To any UNC student who resonates with this feeling of alienation and intolerance, I urge you to stay true to your beliefs while listening to and considering the opinions of others. Write the paper from the position you hold, rather than the safer one. Resist the social pressure to conform to liberal ideology. Hostility too easily boils up in the classroom, so healing must develop in its place. That change starts with students who embrace opposition in opinions and professors who nurture those differences.

I do not write this with a “woe is me” mentality or out of anger, but merely to relay my experience as a conservative on Carolina’s campus. My hope is that my university, other universities nationwide, and our country as a whole will return to a place of valuing differences in opinions rather than fearing them.

Patterson Sheehan is a rising senior at UNC-Chapel Hill studying public policy with the intention of focusing on international adoption law after she graduates.