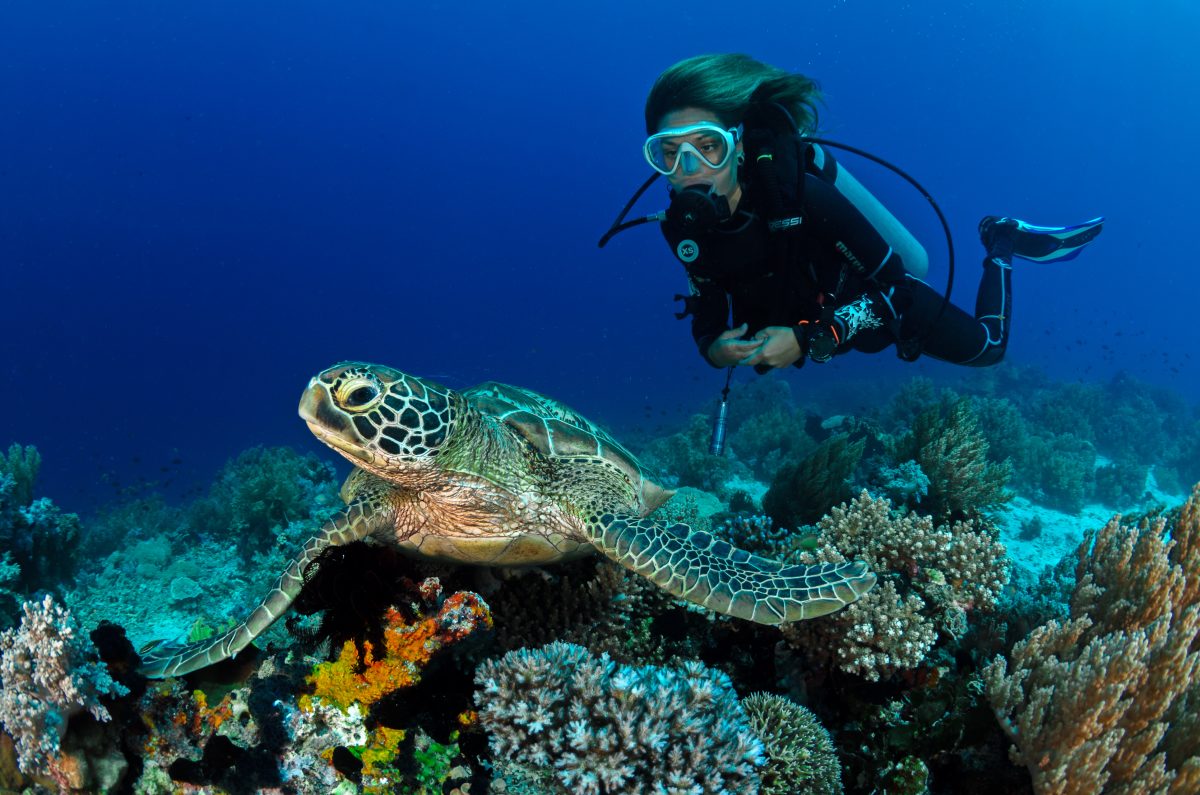 Scuba diving ought to be very dangerous. Recreational diving involves submerging to depths of up to 60 feet. If something goes wrong at that depth, a quick return to the surface is not an option. Ascending to the surface too quickly will cause decompression sickness, which can be deadly. The diver needs to solve any problems beneath the surface, where human beings are out of their element.

Yet scuba diving is actually quite a safe sport. Divers have a fatal accident about as often as joggers. The reason is that everyone who goes scuba diving must be certified, and certification requires completing a three-day course.

The certification process couldn’t be more different from traditional higher ed. When a life is on the line, the material must be accessible and memorable. Not so for a college class.

In a typical college class, students do readings and homework, then show up to a lecture hall (or Zoom meeting) and listen to a professor drone on for an hour at a time. If a student doesn’t understand the material, the class moves on and the hapless student must teach themselves or fall behind. At the end of the semester, students spend late nights in the library cramming, then regurgitate everything they’ve “learned” out again on a final exam that may count for 80 percent of their grades.

After the course is over, the knowledge may fall out of students’ heads before they leave for summer vacation. The problem is that, unlike scuba certification, traditional higher education doesn’t prioritize a teaching method that ensures students will retain information.

I recently received my certification as a PADI Open Water Diver in Cozumel, Mexico. The three-day course I took was about as far from a typical college class as one can imagine. The critical difference was not the subject matter, but the way in which instructors imparted knowledge to students.

The first day of the course takes place in a swimming pool. The instructor demonstrates how to assemble the components of scuba gear and check for problems. I follow his lead and put together my set of equipment, connecting cylinder to regulator, testing air quality, and checking for leaks.

“Great,” the instructor says once we are done. “Now do it five more times.”

Repetition is the word of the day. In the swimming pool, I practice breathing from a regulator and calibrating my buoyancy. I submerge with the instructor to four or five feet of depth, shallow enough so that rapid ascents are not dangerous. Underwater, I practice recovering a lost regulator, clearing a flooded mask, and assisting a fellow diver who has run out of air.

I perform each task at least five times, often more. By the fifth or sixth iteration, I am bored and ready to complain that we ought to move on. I’m doing everything by muscle memory—which is the point.

The next two days of the course are in the ocean, on Cozumel’s coral reefs. I repeat the tasks I learned in the pool over and over again, along with a handful of new ones. I have a “final exam” at the end of the third day, but by that time I have completed the tasks so many times that they are second nature.

When I lose my regulator at 45 feet below the surface, I recover it with one quick stroke of my arm. Even though I am theoretically seconds from death, I never feel the slightest bit worried because I have done this task so many times that it’s drilled into my brain.

Measured against the scuba standard, learning outcomes in traditional higher education have a long way to go. Measured by their scores on the Collegiate Learning Assessment, a test of critical thinking and reasoning, almost half of students learn nothing in their first two years of college, and learning gains for the remainder are modest. College completion rates are mediocre and worst among students with low high school GPAs, suggesting that traditional higher education is bad at imparting information to students who aren’t already very good at learning on their own.

Put simply: If people learned to scuba dive through the traditional higher education model, plenty of divers wouldn’t come back up.

The ability to “do school” well—memorize facts, repeat them on a final exam, and later forget them—does have some signaling value. It demonstrates that a student can buckle down and work when they need to. It shows their willingness to do what is expected of them. It correlates with good schedule management and timely completion of assignments.

Employers value those qualities, and that’s one reason that many are willing to pay more for job candidates with college degrees. It also explains why having a higher SAT score tends to predict other good outcomes in life, even though most careers don’t require correctly choosing the definition of pellucidity from a list of five options.

If people learned to scuba dive through the traditional higher education model, plenty of divers wouldn’t come back up.

But because so much of the learning is missing, a substantial portion of traditional higher education has no real economic worth apart from its signaling value. That’s why, in addition to college degrees, employers like to see job candidates with internships or work experience. A Chronicle of Higher Education survey found that employers think an internship is roughly three times as important as a strong college GPA.

One study on the German labor market found that completing an internship during college tends to boost wages later on in life. The estimated effect doubles for students who study the humanities or social sciences, whose coursework has a more tenuous connection to skills required in the labor market. An internship equips students with the hands-on skills that will be useful in their careers.

Those skills matter, as the structure of alternative career training shows: Apprenticeships and trade schools also adopt the scuba approach.

The Federation for Advanced Manufacturing Education, a network of manufacturing firms, offers a “classic apprenticeship” that focuses on “learning by doing,” according to a report on the program by Tamar Jacoby and Ron Haskins. To the extent classroom instruction is required, it is “coordinated with what happens in the plant so that academic instruction and on-the-job experience reinforce each other.”

Apprentices who completed the program earned almost $100,000 after five years. Their salaries were almost double those of students at nearby community colleges, where learning relies much more on classroom instruction. Apprentices also completed their programs at a rate of over 80 percent, relative to just 29 percent for the comparison group.

If an apprentice learning a manufacturing technique does something wrong, their supervisor will notice quickly and ask them to do it over and over again until they get it right. Our homes, cars, and manufactured goods aren’t falling apart at the joints for the same reason that scuba divers almost never drown: They have perfected their craft through intensive practice.

We could use more of this in traditional higher education: Less emphasis on high-stakes exams and more emphasis on learning.

Professors are understandably wary of rote repetition, but it’s often the best way to learn, as high employer demand for apprentices and former interns demonstrates. Colleges and universities could learn something from trade schools, whether they teach advanced manufacturing or scuba diving.

Preston Cooper is a visiting fellow at the Foundation for Research on Equal Opportunity.