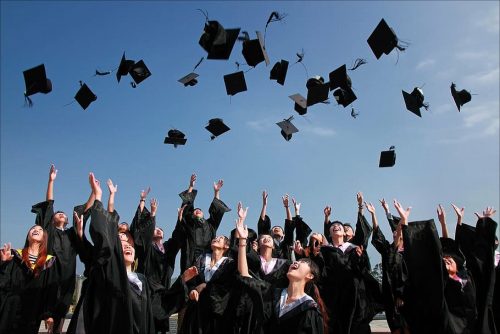 The wage premium attached to a bachelor’s degree largely explains why high school graduates who would have previously looked for a job now apply to college. But they need to know up-front that what they major in has far more importance in landing a well-paying job than where they spend the next four years.

For regional and less-known colleges, stopping enrollment declines depends on demonstrating their value to potential students.

Instead of relying on boilerplate such as small classes, accessible professors, and the like, they need to focus on the ultimate pay-off for today’s younger generation and their hard-strapped parents: well-paying jobs immediately after graduation.

It’s not that a bachelor’s degree should be measured solely by its mercantile value, but that college today is the largest monetary investment most families make. As a result, it has to be evaluated by its pecuniary return. If less-prestigious schools can show that their graduates who have majored in certain fields earn more than graduates with other majors from marquee-name institutions, they have a chance to prosper.

Less-recognizable colleges have experienced precipitous declines in applications this past year.

For example, the State University of New York, the largest public college system in the country, saw applications fall by 14 percent last fall. At Portland State University in Oregon, applications were down 12 percent and transfers down 28 percent. The list of schools in similar circumstances goes on and on.

In sharp contrast, Cornell received 17,000 more applications than ever before. It was not alone. The most selective private and public four-year institutions saw a record-breaking 17 percent increase in applications this year, according to the Common App.

That’s an ominous sign because plummeting application numbers can spark program and faculty cuts. It’s a vicious cycle, with little hope on the immediate horizon unless schools not on the A-list rethink their appeal to high schoolers and their parents.

Unlike their prestigious counterparts, lesser-known colleges have to publicize their uniqueness.

Let’s start with the obvious. Which is more likely to lead to a job that provides immediate economic independence: a gender studies major from Harvard or a computer science major from the University of Mississippi? The operative word is “immediate” because graduates have bills to pay and can’t wait decades for a significant earnings boost.

New data underscore the wide variation in wages across college majors. In many cases, the gap is as large as the college wage premium itself.

Beginning in 2009, the American Community Survey started collecting information on degree fields for bachelor’s degree holders. It found that engineering majors have the highest four-year wage premium at 125 percent, while psychology and social work majors have the lowest premium at 40 percent.

But here’s the catch: The data are not broken down by comparing different majors between colleges. The data don’t allow comparisons between an English major at Dartmouth and an English major at the University of New Hampshire. Instead, it’s a picture of a generic student from place to place.

The data also do not distinguish between the quality of jobs and the probability of employment.

The gainful employment rule affects all programs at for-profit universities and punishes them if they have low post-graduate employment rates, but it doesn’t apply to non-profit colleges. If students are primarily concerned with getting a good job after graduation, then why shouldn’t it apply to all traditionally accredited colleges? The line between the two is increasingly gray. Poorly performing institutions of all kinds that fail to demonstrate a reasonable return on investment shortchange students.

If all this sounds as if college is little more than a business, it is because of its cost. Decades ago, when most young people ended their formal education with a high-school diploma, college was quite affordable. It’s why college then was merely the most convenient place to learn how to learn. It was not an absolute determinant.

But those days are gone forever. As a result, all institutions have a duty today to provide evidence beyond the cachet of their names and the bragging rights of their graduates for why they deserve consideration by students.

Poorly performing institutions of all kinds that fail to demonstrate a reasonable return on investment shortchange students.

The appeal of a brand name to young people is understandable since it accounts for so many of their choices in their daily lives. But they’ll soon learn that when it comes to education, there is no substitute for acquiring marketable knowledge and skills in a competitive setting. The colleges that convince them can more than hold their own.

There’s already evidence to that effect. Families in Arkansas, Colorado, Tennessee, Texas, and Virginia can now compare the actual first-year earnings of students based on their majors. The salaries come from the states’ unemployment insurance programs, which collect earnings information from employers every quarter. Based on social security numbers, the states then match the information to college graduates.

In Tennessee, the average first-year salaries of graduates with an associate degree are $1,000 higher than those with a bachelor’s degree. Those with a technical degree often earn more their first year out than those who studied the same field at a four-year university. For example, graduates who major in health sciences from Dyersburg State Community College earn $5,300 more on average their first year than their counterparts at the University of Tennessee at Knoxville. And they finish two years earlier. But Tennessee is not alone. Automotive-technology graduates at Northern Virginia Community College out-earn business graduates from Radford University in Virginia

Snob appeal apparently no longer plays the same overwhelming role in college selection for all students as previously believed. For example, Pasadena City College in California has had a 320 percent increase since 2007 in students whose parents make more than $100,000 a year. Hundreds of two-year colleges now attract well-heeled students, including Williston State college in North Dakota and Colorado Northwestern Community College in Rangely.

The availability of data makes comparisons of majors much easier than ever before. The Department of Education’s College Scoreboard website boasts that parents and students can now figure where to get “the most bang for your educational buck.” The Chronicle of Higher Education’s College Reality Check makes for quick and easy comparisons between colleges.

It’s a new world in post-secondary education in this country. The benefits of higher education may not be captured by the earnings of graduates alone, but they count, which is why institutions not on the A-list shouldn’t be counted out.