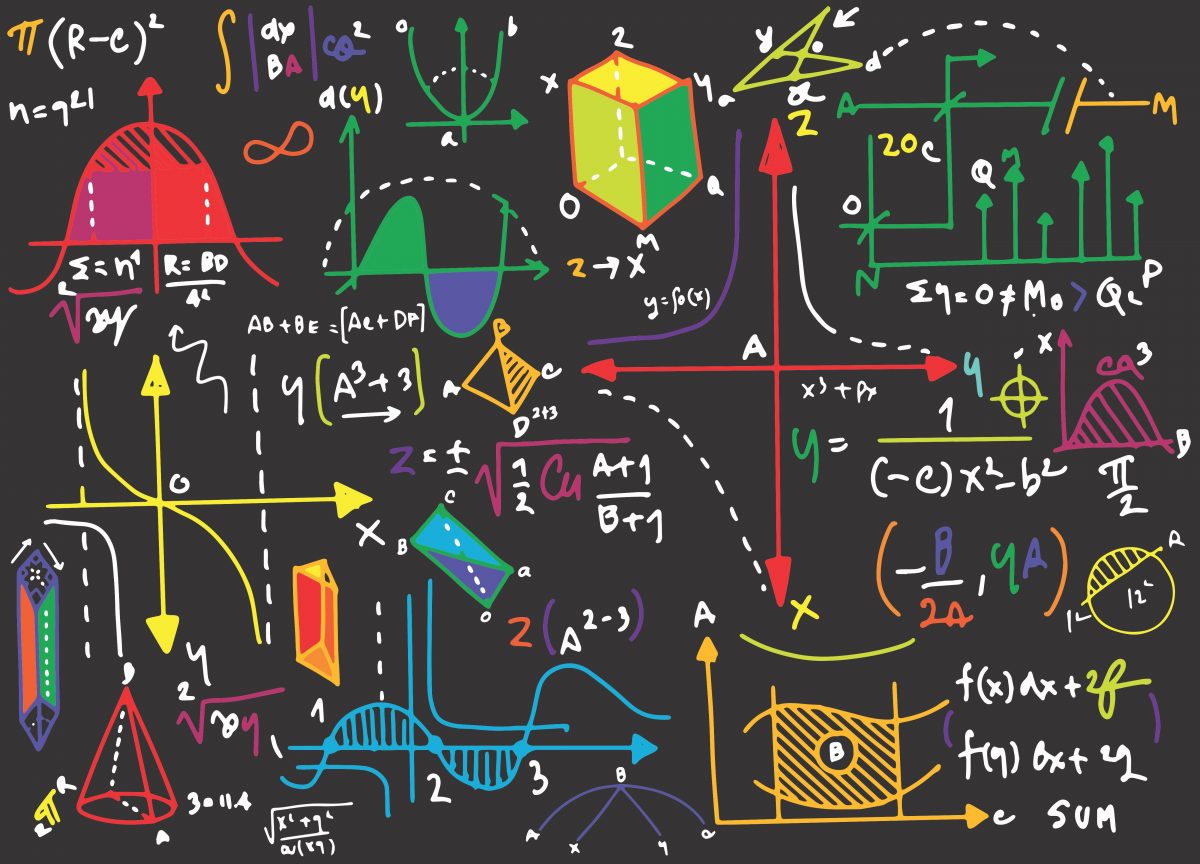 When it comes to math performance, the United States has a pitiful record. Each year, about 1 million students enroll in college algebra and about 50 percent of those students fail to earn a “C” or better.

And according to the Organization for Economic Cooperation and Development (OECD), the U.S. considerably underperforms in high school math on an international level. In the OECD’s 2018 Program for International Student Assessment, the United States was outperformed by 36 countries, including China, Russia, Italy, France, Finland, Poland, and Canada.

In North Carolina, 26 percent of UNC system students earned a “D,” “F,” or “W” (a withdrawal) in mathematics and statistics courses between fall 2015 and spring 2018.

But instead of investigating ways to improve math education, North Carolina university leaders have decided to create alternate “pathways” for students who are less math-minded. According to UNC administrators, gateway and entry-level math courses—like college algebra—are “stumbling blocks” for too many students.

But, like so many of the initiatives the academic staff in the system office push forward, the Math Pathways task force’s recommendations are a de facto lowering of standards.

Of course, UNC’s academic staff don’t see the proposed changes as a lowering of standards. They argue that classes like college algebra simply don’t “align” with many students’ career goals. Why, for example, should drama or history students have to grapple with something as “irrelevant” as algebra?

According to the UNC system’s website, the Math Pathways project “originated with a desire to take a broad, thoughtful look at how students were moving through their mathematics courses of study.” On April 30, the UNC system announced that each of its 17 schools signed a formal letter committing to the core recommendations laid out by the task force.

This work reflects the advantages we gain by working together as a system. Whereas most curricular improvements are often pursued by institutions working within their institutional boundaries, Math Pathways has been collaborative from the start.

This work reflects our ongoing commitment to improve student success and support equitable access to education. When our work is complete, students from across the state will benefit from more responsive math curriculum and improved transferability and applicability of credits across North Carolina’s higher education institutions.

But taking a close look at the task force’s source of inspiration raises a serious question: Will academic rigor be sacrificed for the sake of implementing a more “responsive curriculum?”

The UNC system is modeling its approach on the University of Texas at Austin Dana Center’s Mathematics Pathways initiative. The Dana Center recommends that students’ courses of study be organized in “clusters” according to similarity. For example, the liberal arts, fine arts, and humanities are all in one cluster. Science, technology, engineering, and math share another cluster. In total, there are six degree clusters that have their own math pathway. 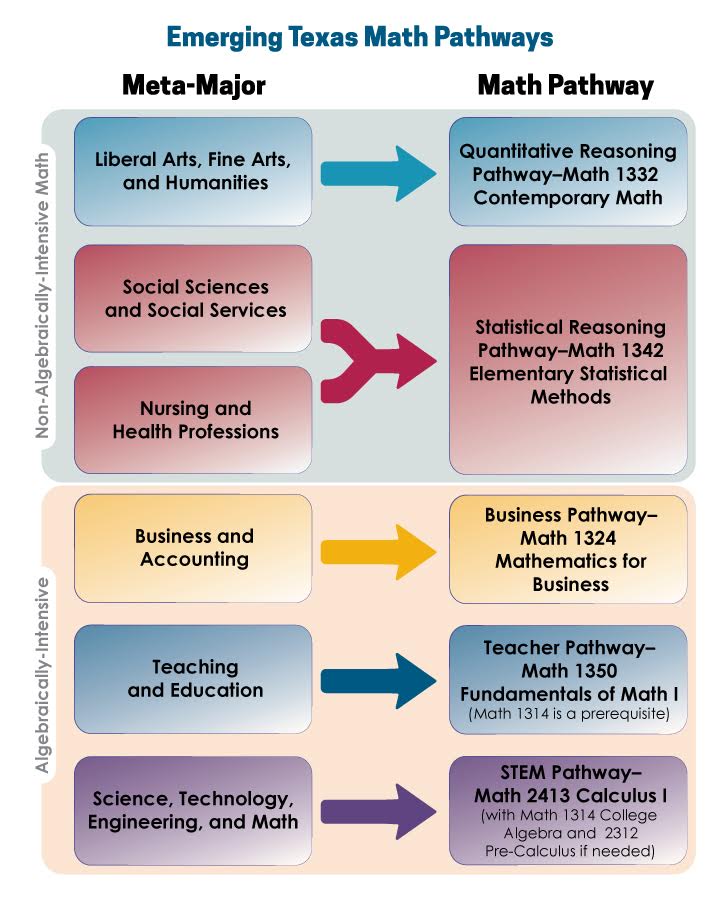 Policymakers at UT-Austin determined that “contemporary math” is more relevant to liberal arts students than college algebra.  A cursory glance between the two courses’ assigned textbooks and course descriptions, however, suggests that they are not equal in rigor.

Unlike the college algebra course, the “quantitative” reasoning course has fewer clearly defined learning objectives and the content is largely determined by the instructor. Below is a side by side comparison of the courses, as described in UT-Austin’s Undergraduate Course Catalog.

Textbook: “The Heart of Mathematics: An invitation to effective thinking”

With chapter names such as “Fun and Games,” “Geometric Gems,” and “Taming Uncertainty,” most students likely would be thrilled to opt for a course based on the “Heart of Mathematics” instead of a tedious and confounding college algebra class.

And given the fact that much of the course content is determined by individual instructors, there is likely a widespread lack of uniformity in what students learn. Nevertheless, the UNC system is following in UT’s footsteps.

It shouldn’t be hard, however, to see why leaving the content and learning objectives of a math course up to the “needs” of a given student population or on the “values” of each institution is extremely imprudent. What if a given student population, on average, “needs” easier math classes in order to not dropout? What if an institution “values” churning out degrees more than it values rigorously forming students’ minds?

Indeed, there is reason to question administrators’ motives for changing math requirements. For one, it’s suspicious that the same academic staff that supported lowering UNC system admission standards are anxious to make it easier for underprepared students to satisfy entry-level mathematics requirements. Since the lower standards will open the door to an influx of underprepared students, many of the institutions—especially the ones that already have dismally low graduation rates—will be desperate to make sure that students “succeed” in their math courses.

There is also reason to question administrators’ rationale for instituting different math pathways. For some reason, the academic staff at UNC are loath to attribute any failing in “student success” to students’ own shortcomings.

What if an institution “values” churning out degrees more than it values rigorously forming students’ minds?

As a result, instead of looking at poor grades and high fail rates as evidence that a student might not be ready for college-level work, administrators conclude that the fault lies in the classes themselves, not in students’ academic ability. But such a premise is absurd. The administrators are clearly refusing to admit that students are likely failing college algebra because they are unable to do university-level math, not because it doesn’t “fit” with their career goals.

Even if it were true that students are primarily failing college math simply because it doesn’t “align” with their interests, that is still not a valid reason for changing math requirements. That’s because a true liberal arts education should provide students with a broad base of knowledge, and expose them to subjects outside of their major course of study. A shallow and impressionistic sampling of math and science is no replacement for familiarity with the real thing.

While it’s natural for students to succumb to utilitarian impulses and want to study material that is directly related to their career interests, a liberal arts education is not just about skills training. Liberal arts students don’t just study things because they are “useful,” they study because it is intrinsically good to pursue the truth and to gain knowledge.

If students are not interested in this kind of education and seek only to gain skills for the job market, perhaps they would be better suited to attend a community college or a trade school.

While it’s understandable how students’ urgency to pass the finishing line sometimes blinds them to the less-tangible goods of higher education, UNC’s academic staff has no excuse and should know better.