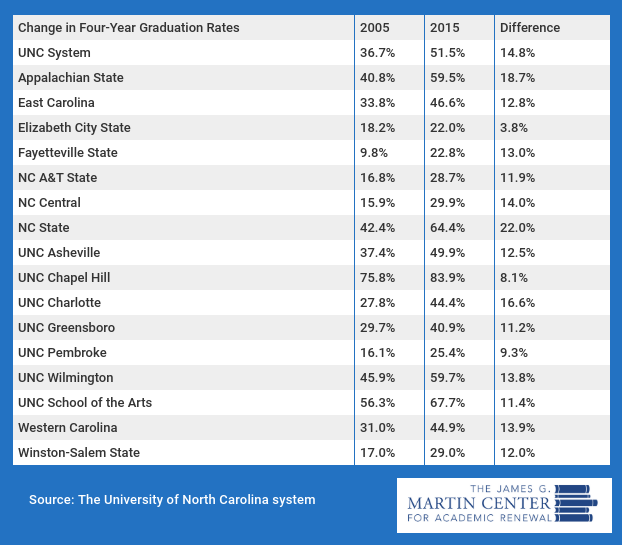 Timely graduation rates reveal a lot about how well colleges are fulfilling their academic mission. If, for example, the majority of students don’t graduate in the traditional four-year period—or even in five years—a fundamental question must be raised: Are colleges accepting students who are truly academically prepared?

For some University of North Carolina institutions, the answer is unclear. Graduation rates from 2005 to 2015 from UNC system schools show that, despite some improvement, too few students graduate in four years.

In 2005, Fayetteville State University’s graduation rate was a bleak 9.8 percent. In 2015 (the most recent data), its graduation rate was 22.8 percent—the second-to-lowest rate of all UNC schools, just ahead of Elizabeth City State University’s rate of 22 percent. In a sense, the change is a large improvement—a 133 percent percentage change. Nevertheless, the vast majority of the school’s students still did not graduate on time, or perhaps dropped out altogether.

Although it is positive that all of the graduation rates increased, the reality remains that too many institutions within the UNC system have extremely low graduation rates. The dismal rates should prompt university leaders to take a close look at applicants’ academic credentials.

Student preparedness is of course not the only factor in why students drop out or graduate excessively late, but it certainly is a key factor—one that policymakers often do not like to consider for fear of appearing harsh.

But admitting underprepared students does a great disservice to them in the long run because a prolonged stay in college increases the amount of debt they accrue. It particularly hurts students who drop out with debt—they struggle the most in paying off their student loan bill.

Shannon Watkins is a senior writer at the James G. Martin Center for Academic Renewal.