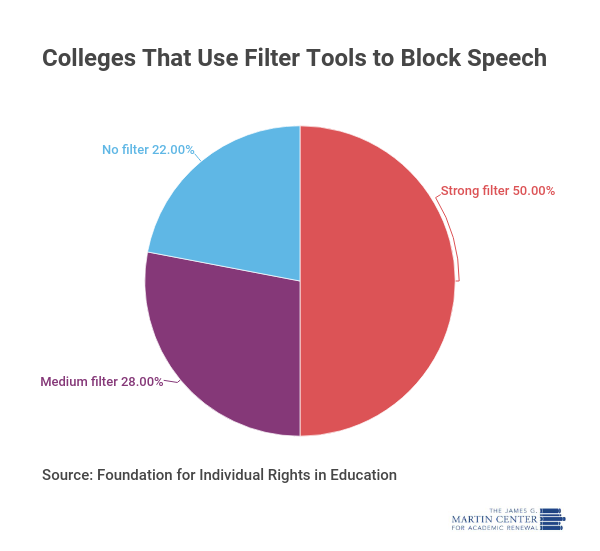 Facebook and Twitter offer colleges tools to limit comments from the public, but using them constitutes a First Amendment violation. A new report from the Foundation for Individual Rights in Education noted their widespread use and the potential for abuse.

FIRE’s survey focused on the largest public four-year and two-year schools in each state, getting substantive responses from 198 colleges on how they use social media. The majority of schools, 77.8 percent, admitted they used a “strong” or “medium” profanity filter. Additionally, 30 percent of schools noted their use of a custom blacklist for words and phrases.

“These tools enable public universities—and other government actors—to quietly remove critical posts, transforming the Facebook pages into less of a forum and more of a vehicle for positive publicity,” FIRE noted. “This censorship has deleterious effects on campus and public discourse.”

Some schools seem to be operating in ignorance of what the Constitution requires. Wayne State University in Michigan, for example, is retraining social media staff since receiving a public records request from FIRE. It’s not all that surprising that institutions would assume they could remove or hide profane speech on posts about athletics or non-political topics.

Other schools, however, have less-than-defensible motives. The University of North Carolina at Chapel Hill blacklisted “Silent Sam” for all its posts, which will hide any criticism without notifying individuals when their posts had been removed. Other schools, such as the University of Kentucky, Mississippi State University, and Clemson University, censors posts with words like “chicken” or “Nike” to hide criticism of those schools’ lucrative contracts with Aramark and Nike.

“These tools enable public universities—and other government actors—to quietly remove critical posts, transforming the Facebook pages into less of a forum and more of a vehicle for positive publicity,” FIRE noted.

Universities often use social media as another arm of their PR apparatus. Highlighting important research or student success stories may attract future students or new donors. But constitutional protections limit their ability to censor critics or hide posts deemed offensive by university workers.