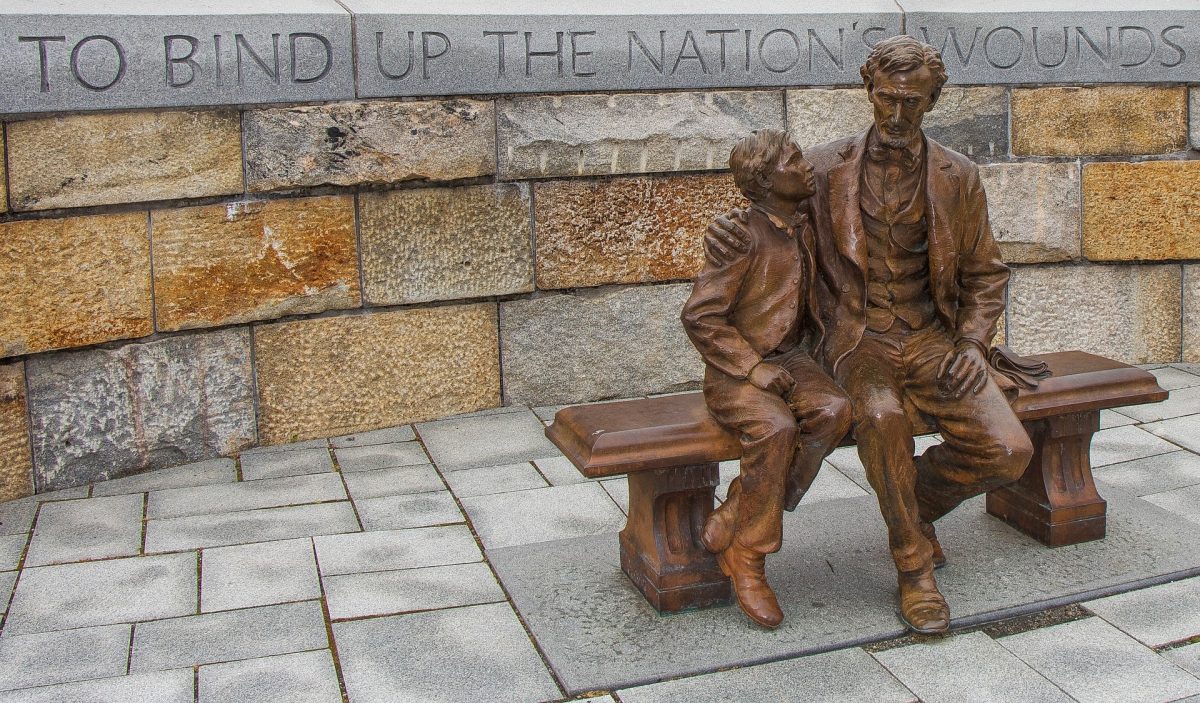 To be ignorant of what occurred before you were born is to remain always a child. —Cicero

It’s no secret that many of today’s students are ignorant of American history and of how American democracy works. According to a 2018 survey conducted by the Woodrow Wilson National Fellowship Foundation, only 1 in 3 Americans would be able to pass the U.S. citizenship test. Clearly, the current education system—at the K-12 and college levels—has failed to do its job. And that includes the University of North Carolina system schools.

According to the American Council of Trustees and Alumni (ACTA), none of the UNC system schools require students to take “a survey course in either U.S. government or history with enough chronological and/or topical breadth to expose students to the sweep of American history and institutions.” In fact, of all the 49 North Carolina colleges and universities that ACTA evaluated, only two schools fully met the above criteria.

Fortunately, there are now a number of initiatives that aim to fill the gaps in students’ historical knowledge. One of those initiatives is the American History for Freedom program. The Martin Center sat down with the Bipartisan Policy Center’s Jacqueline Pfeffer Merrill to learn more about the program.

Could you give a little background on the American History for Freedom program?

Thanks for the interest in this too-little-known but important program! The American History for Freedom (AHF) program was added to the American Higher Education Act when that Act was last reauthorized by Congress in 2008. Just a brief reminder from readers’ high school civics class: When Congress authorizes a program, that doesn’t mean that the appropriate federal department or agency will start setting it up. For that to happen, Congress also must appropriate funds to establish and run the program. To date, that second step hasn’t happened.

The good news is that there is fresh bipartisan interest in the AHF program. Last year, a bipartisan group of eight Senators introduced the USA Civics Act of 2019, which would reauthorize this program. That bill isn’t likely to be passed in this Congress, but it is a strong signal that there is bipartisan support to see the AHF program funded in this budget cycle, which kicked off when the president sent his 2021 budget proposal to Congress on February 10. The House and Senate are beginning the long process of preparing a budget resolution, which could include a first-time appropriation for the program.

What is the status of the program today?

AHF was signed into law as part of the Higher Education Act of 2008, but never received appropriations funding. However, Congress has the ability to fund the program through the current appropriations process.

I’m sure some of your readers do worry about adding yet another federal spending program. But I’d liken the AHF program to infrastructure programs. We need ongoing investment in our highways, ports, digital capacity, and the like so the economy will grow over the decades ahead. Likewise, we need ongoing investment in what I’d call our intellectual infrastructure so that we can have a healthy democracy, with citizens who know their history and Constitution. Investing in the AHF program is an intellectual infrastructure investment that will pay civic dividends for decades to come.

There are reports that students leave college with little knowledge of American history. How little do students actually know and how would the program help solve that problem?

Alas, the reports about what people, including the college-educated, know about American history and how our government works are pretty depressing. A survey by the American Council of Trustees and Alumni found that less than 40 percent of respondents—and only a little more than half of college graduates—could correctly answer a multiple-choice question about the length of terms for members of Congress. More than half of respondents—and a third of college graduates—did not know that the Bill of Rights is the name given to a group of Constitutional amendments. I could go on, but I don’t think there’s doubt graduates and the public too often don’t know basic facts about our history and government. That has real consequences: people don’t know how to be engaged citizens, and they lack the knowledge to contextualize current events and controversies in a longer, broader understanding of our past.

Why do too many Americans know so little about American history and how our government works? One factor for the widespread historical and civic illiteracy is simply that these subjects are not being taught, or taught with enough rigor, in K–12. A recent study found that only eight of the 50 states require a year-long course in civics and government, and only 28 states require a year-long course in U.S. history. Too often teachers are not as ready as they should be—or as they want to be—to teach about our country.

Thankfully, the AHF program has a specific provision to address the K–12 teaching of civics and history. The program can fund teacher preparation programs that will “stress content mastery.” It can also fund collaborations with local educational agencies, allowing teachers who are already in the classrooms to access programs that will boost their knowledge. This is a real opportunity to better prepare those who will be teaching civics and U.S. history in our primary and secondary schools.

The AHF program will be a real boon to funding programs and centers that will deepen college and university students’ knowledge of our country. That’s especially important since the number of students majoring in history has plunged since the Great Recession, even as college enrollment has risen. Much of the programming funded may be co-curricular activities, lecture series, and events that will attract students who are not history majors. We want students in STEM fields, in pre-professional majors, and business programs—those who may not have learned much U.S. history and civics in primary and secondary schools—to have another chance to pick up this knowledge on campus.

By funding programs and centers that can equip students with historical knowledge in which to contextualize current affairs and understand how our political and civic institutions can address today’s challenges. The AHF can help prepare students to be the next generation of leaders, move our country past its current polarization, and restore our traditions of civility, mutual respect, and pragmatic compromise.

Do you have any examples of current university programs this would fund?

Sure, there are scores of examples. The American Council of Trustees and Alumni lists “Oases of Excellence” and “Partners” that are faculty-led, outstanding programs. Just a few examples, from schools public and private: The Center for the Study of Government and the Individual at the University of Colorado-Colorado Springs, the McConnell Center at the University of Louisville, and the Ashbrook Center affiliated with Ashland University. Of course, I’m not saying these particular centers would apply for grants from the AHF program, just that they are the kind of academic centers encompassed within it.

I know many of these faculty leaders who truly care about preparing their students to be engaged and knowledgeable citizens.

Frankly, the professors who lead these centers are often the most entrepreneurial among the faculty and the most engaged with their students. I know many of these faculty leaders who truly care about preparing their students to be engaged and knowledgeable citizens.

The fact that scores of such centers have been created without a federal program doesn’t obviate the importance of the AHF program. Many of these campus programs and centers operate on a shoestring budget—grants that would increase the capacity of these programs to increase their capacity would make a real difference. I know professors running these centers who would welcome a grant to buy books from the tradition of American political thought and a few pizzas for dinner seminars with students, or funds to bring guest speakers who would bring viewpoints that are less frequently heard on campus—or, more even ambitiously, funds to establish brand-new centers or to create new programs of study.

Many would be concerned if a federal program sought to promote American history according to Howard Zinn or the 1619 Project. How is the American History for Freedom Program different?

Good question, but I think the AHF program is very different. The examples you mention are single-author and reporter-curated, not the kind of campus-based, academically vetted programs and centers with ongoing courses, lecture series, seminars, and symposia as envisaged in this program.

First, there’d be multiple quality checks at the college and university level: A rogue professor cannot set up an academic program or center on just his or her say-so. Schools carry out their due diligence when a professor or group of professors propose a program or center. The professor would need to write a proposal—essentially a business plan—describing prospective programming and activities, topics to be addressed, and how students would benefit. That proposal would be vetted in a healthy review process, by faculty peers, the dean, perhaps the faculty senate and provost—sometimes even the board of trustees.

In examples I mentioned earlier, each went through a campus vetting process. There truly are campus-based programs and centers offering just the kind of programming that can ensure this generation learns about our history, Constitution, and institutions of freedom.

As an added measure of reassurance, applications for AHF funding would also be subject to a Department of Education grant review process.

If supported by Congress, how would the program enable North Carolina’s colleges and universities to teach American history?

Schools in the Tar Heel state could apply for grants to establish or to expand the programming on American history and free institutions. There are already examples of outstanding centers of this sort in North Carolina, such as the Eudaimonia Institute at Wake Forest University and Program in American Values and Institutions at Duke University. I know lots of people are excited about the UNC Program for Public Discourse that is on the University of North Carolina-Chapel Hill campus. Other colleges, both public and private, in North Carolina might seize the opportunity to establish such centers.

North Carolina sets a higher bar than many states for high school graduation, by requiring year-long courses in civics and government and U.S. history. But for those courses to prepare students properly, teachers need to be content experts. The American History for Freedom program could fund programs that would better prepare teachers before they enter classrooms, as well as teachers already in classrooms.

Shannon Watkins is a senior writer at the James G. Martin Center for Academic Renewal.