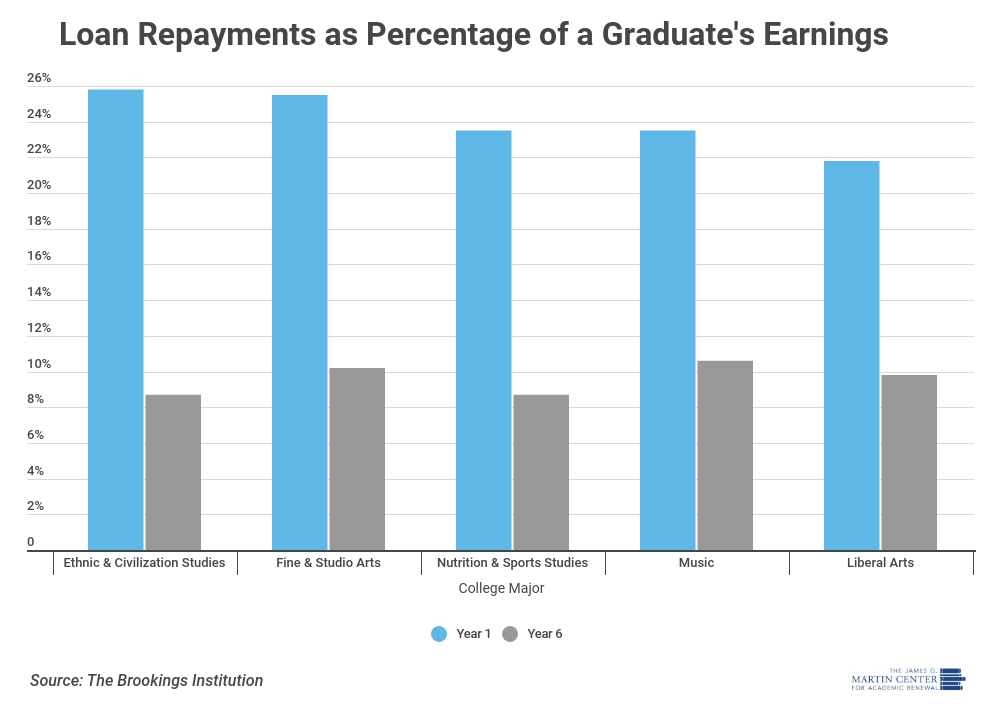 College students have taken on so much debt that many political leaders are declaring a “student debt crisis.” Certainly, many former students are facing a crisis as they struggle to pay back their loans several years after graduation. Even graduates from low-earning fields of study, however, see their salaries improve to the point where their debt-to-income ratio isn’t onerous. Though what field of study students choose can determine their post-graduation salaries, the important thing for students is to make sure they finish college with a degree.

One rule of thumb for students who need a loan is not to borrow more than they expect to make in the first year after graduating. On average, earning a college degree pays off in the long term, but a graduate’s field of study can mean dramatic differences in earnings.

The difference between first-year earnings and fifth-year earnings also matters. Median earnings typically increase by 65 percent over that period. Some majors yield relatively low salaries in the first year after graduation (such as fine arts, nutrition and sports, and therapy professions), requiring students to put aside more of their paycheck to repay student loans. However, six years after graduation, even students who studied low-paying majors such as ethnic and civilization studies typically experience enough of a salary increase that, on average, their loan repayment falls from 25 percent of their income to only 8 percent.

It’s important to remember, too, that students who drop out of college and don’t earn a degree still must repay their student loans. For those drop outs, repaying the debt is more difficult.

Of course, some majors can mean a high salary right away, and for students in those fields (such as engineering, computer science, and finance), taking out large student loans will likely prove to be a worthwhile investment. But for others, it is important to take a good look at not only projected first-year earnings, but how these earnings grow.

Madeline Baker worked as a research intern at the Martin Center in summer 2019. She is pursuing a bachelor of science in International Economics and Finance with a minor in Spanish at Catholic University in Washington, D.C.