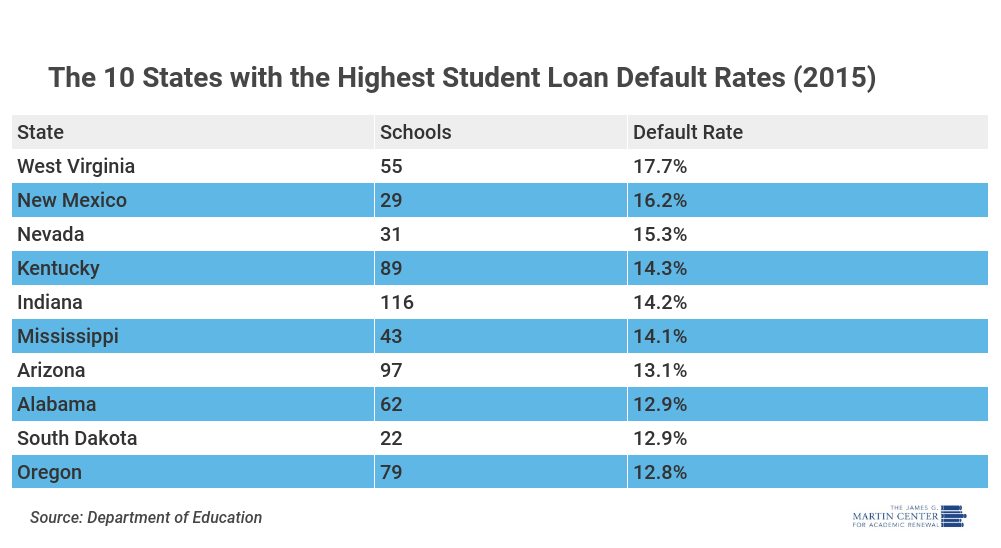 The Department of Education provides data on cohort default rates by institution, which informs the public of how many students who borrowed for college cannot repay. The cohort default rate is the percentage of a school’s borrowers who defaulted on their loans within a fiscal year.

At the state level, student loan default rates indicate how well students can repay their loans after leaving college. Low or high default rates can indicate a number of things, such as the quality of education in the state or the value of a college degree in the state’s job market.

Despite the overall decrease, some states still have extremely high default rates. While West Virginia lowered its default rate from 18.3 percent in 2014 to 17.7 percent in 2015, close to one of every five student loan borrowers in the state cannot reliably pay off their debt. New Mexico saw a larger improvement, down 2 percent from its 2014 rate, but still shows the cost of the federal government providing easy-to-get loans.

More than 10 other states have default rates over 10 percent, including large states such as Ohio, Michigan, Florida, and Georgia. Still, a decrease in the national cohort default rate is an improvement, and hopefully marks the beginning of an ongoing downward trend.