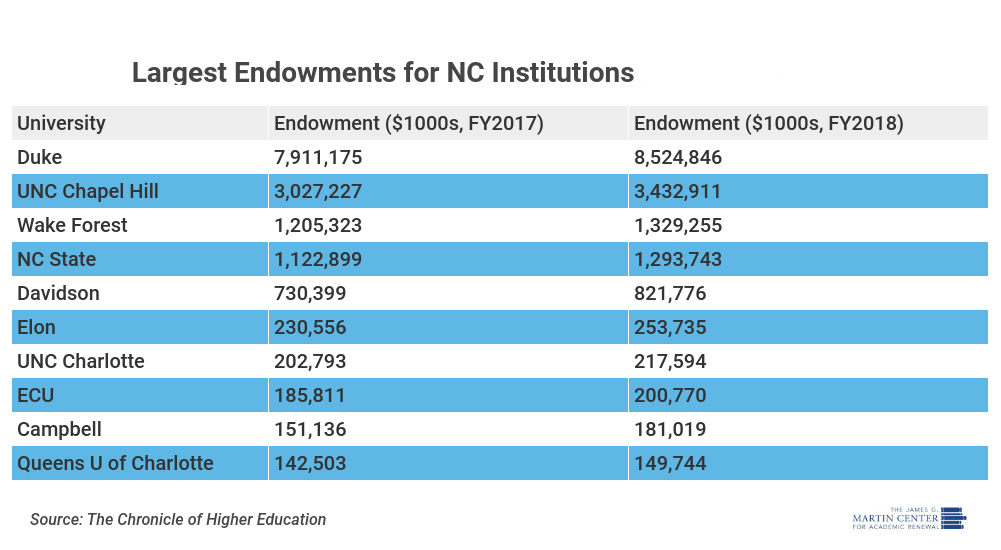 A college endowment is a fund where an institution keeps its financial assets and donations and can invest that money for the college’s long-term stability. In North Carolina, the largest college endowments saw their market value increase between 8 percent and 20 percent from 2017 to 2018.

Despite the smaller increase, Duke’s $8.5 billion endowment is still more than twice as much as the University of North Carolina at Chapel Hill’s $3.4 billion endowment, the second-largest in the state. While North Carolina endowments grew in 2018, endowment growth slowed nationwide, from 12 percent in 2017 down to 8 percent, according to The Wall Street Journal. The national trend may be a result of the 2017 tax reform, which removed the option to deduct charitable donations for many people, and returns may have been hurt by a decline in American and international stock markets in 2018.

Endowment growth could slow, too, as colleges spend more from their endowments on student financial aid, academic programs, and other university expenses. Susan Whealler Johnston, president and CEO of the National Association of College and University Business Officers, told The Wall Street Journal that “We may be sacrificing inflation-adjusted gains for future generations by placing a priority on providing funds for the current generation.”