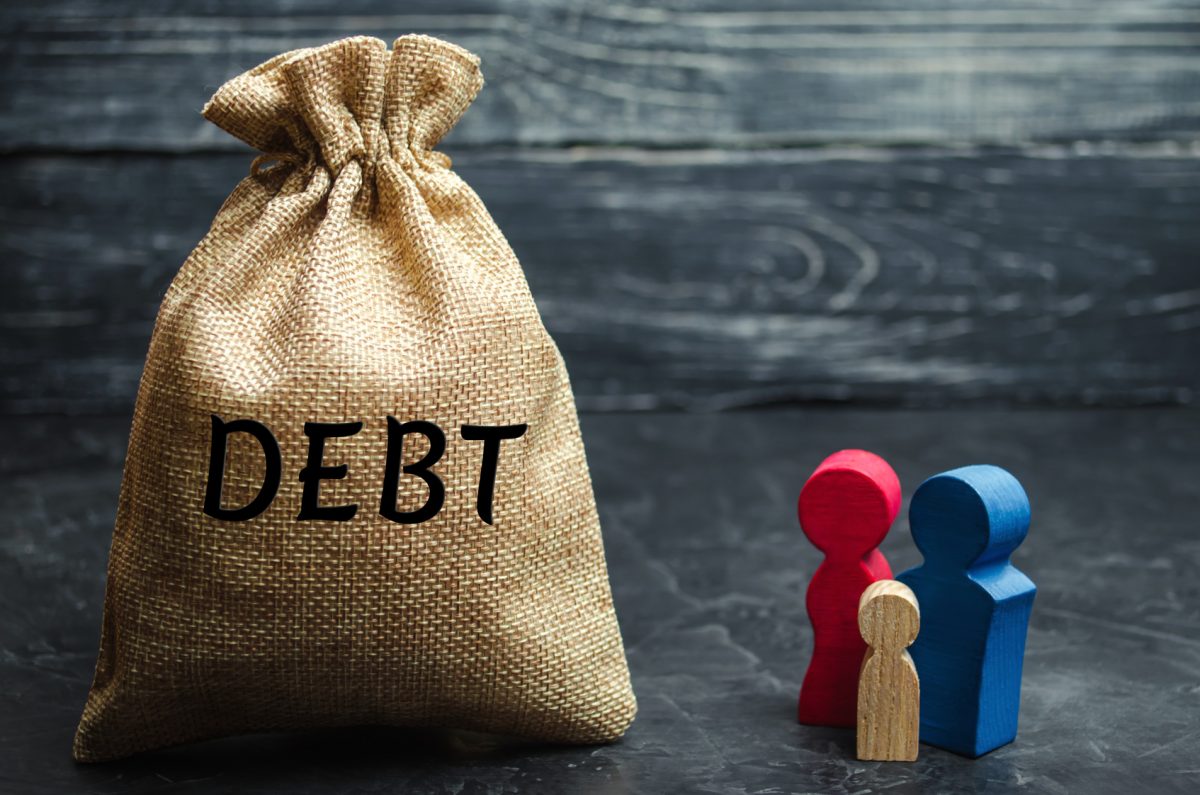 Parent PLUS is not typically the loan program making headlines when student loans are in the news. But over the past several years, it has become a central part of America’s higher-education financing system. Under Parent PLUS, parents can borrow freely—with no limit—from the federal government to support their children’s education.

Government programs without significant guardrails rarely turn out well, and Parent PLUS is no exception.

New research from Adam Looney and Vivien Lee of the Brookings Institution illustrates just how out-of-control the parental loan program has grown. In 2014, the average parent borrower held $38,812 in Parent PLUS debt at the conclusion of her child’s education—an increase of more than $17,000 from just three years prior. Since 1994, average Parent PLUS balances have more than quadrupled, after adjusting for inflation.

The consequences of this parent debt explosion are many, and few of them are good. Because the federal government effectively imposes no caps on Parent PLUS lending, the program gives colleges broad latitude to raise tuition. A 2018 paper by UCLA economists Mahyar Kargar and William Mann confirmed the inflationary impact of unlimited parental loans. But higher tuition is just one of many problems that stem from this program.

As balances have risen, parents are paying back their loans at slower and slower rates. The typical parent who started making payments on her loans in 1994 could expect to pay back a respectable 57 percent of the total balance within five years. But as borrowing has risen, it’s becoming harder and harder for parents to pay in a timely fashion. The typical parent who entered repayment in 2009 paid back only 36 percent of her balance within five years. Larger and larger balances for more recent cohorts will likely push repayment rates down even further. 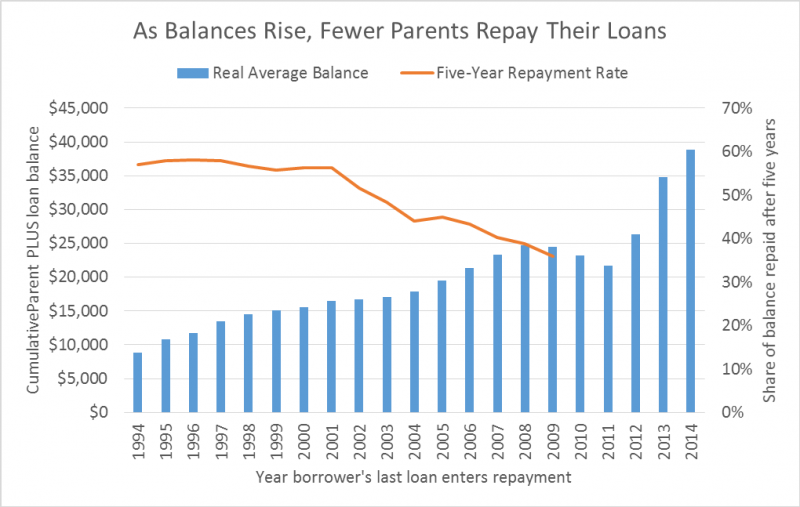 Despite slower rates of repayment, parental loans actually make money for the government. Taxpayers net 13 cents for every dollar disbursed, and parent loans are the only category of federal student loans to turn a profit. This profitability is because parents pay higher interest rates (currently 7.6 percent) and are ineligible for several loan forgiveness programs that student borrowers can access.

But as balances continue to rise, it will become more difficult for parents to pay back their loans in a timely fashion. It is not difficult to imagine Parent PLUS loans turning from a net profit to a net loss for taxpayers if current trends continue. This new burden would be unsurprising, as lending to parents of college students violates the fundamental logic behind consumer financial products.

For most loans, the individual or entity who pays back a loan also receives the benefits of the assets financed by the loan. A family with a mortgage lives in the house the mortgage paid for. Someone with an auto loan can use the car he financed to get to work and earn money to make loan payments.

Education generally (but not always) provides students with a boost to their earnings prospects. The expectation of higher future salaries means students can justify taking loans to pay for college. Larger increases in earnings potential justify larger loans. That’s why one can justify borrowing $5,000 for an associate’s degree from a community college, but $150,000 for a law degree from an Ivy League school.

But when parents of college students go into debt to pay the tuition bill, they get none of those earnings benefits. Students may sometimes help their parents repay PLUS loans, but at the end of the day, only the parents are liable for the debt. The result: the amount that a parent borrows from the federal government may be entirely unrelated to her ability to pay it back.

In fact, the Department of Education frequently makes loans to parents whom it has already determined cannot afford them. Before a student gets any aid from the federal government, the Department calculates an “expected family contribution” based on her family’s income, assets, and other factors. This number represents the amount that the Department believes a student’s family can reasonably be expected to contribute to her college education, given their financial situation.

In 2015, 18 percent of families receiving a Parent PLUS loan had an expected family contribution of zero. In other words, the federal government determines that hundreds of thousands of parents can contribute nothing to their children’s college education, and then turns around and gives those same families tens of thousands of dollars in high-interest loans.

To sum up: the federal government offers parents unlimited loans, with minimal credit checks and high interest rates, to pay for an asset from which borrowers derive no direct benefit. If parents fall into default, the government has the power to garnish their wages and seize their tax refunds, charging collection fees of up to 20 percent along the way. And other questionable practices abound; a New America study found that financial aid award letters sometimes do not even make it clear to families that Parent PLUS loans are loans.

If any entity but the federal government were making loans on these terms, it would be labeled a predatory lender and incur the full wrath of regulators at every level of government. But because the Department of Education is the lender with Congressional blessing, these predatory practices get a pass.

If any entity but the federal government were making loans on these terms, it would be labeled a predatory lender and incur the full wrath of regulators at every level of government.

What should be done? Despite the fact that many parent borrowers cannot afford the loans that the federal government gives them, their children are another story. Most children of Parent PLUS borrowers attend a school that is at least moderately selective, suggesting that these students have a good chance of finishing college and landing a decent job after graduation.

Congress could eliminate Parent PLUS loans outright. Students who currently receive funding through PLUS loans would be good bets for lenders in the private market. Colleges might also step up to provide loans. Either way, ending loans to parents will ensure that the people responsible for repaying the debt are those who derive the biggest benefit from the education: students themselves.

But eliminating Parent PLUS loans with no replacement is a nonstarter in a divided Congress. It probably wouldn’t go far even under a united Republican government, given that the GOP’s 2017 proposal to overhaul the federal role in higher education did not eliminate Parent PLUS loans and still could not attract any Democratic supporters. Ending the predatory parent loan program will require compromises.

Unlike Parent PLUS loans, the federal government caps direct lending to undergraduate students. Those caps have not budged since 2008. That has held down median student debt for new college graduates, which has mercifully remained near $29,000 for several years now. But perhaps in exchange for the end of the Parent PLUS program, conservatives could offer a modest increase in the caps on federal undergraduate loans.

That trade would cost money. Parent loans are profitable for taxpayers, but undergraduate loans have lower interest rates and represent a net loss to the government. Therefore, such a deal should also include cost-savers, such as eliminating in-school interest subsidies on undergraduate loans, which allow students to avoid interest accruing on some loans while still in school. This would save $17 billion over a decade while leaving the amount of money students can borrow unaffected.

Parent PLUS loans represent big government at its worst. The Department of Education does parents no favors by loading them up with high-interest loans while barely considering their ability to repay. As the program continues to spiral out of control, taxpayers’ exposure will rise, as will college tuition. There was never any good reason for the government to lend to college students’ parents. There’s still no good reason today.