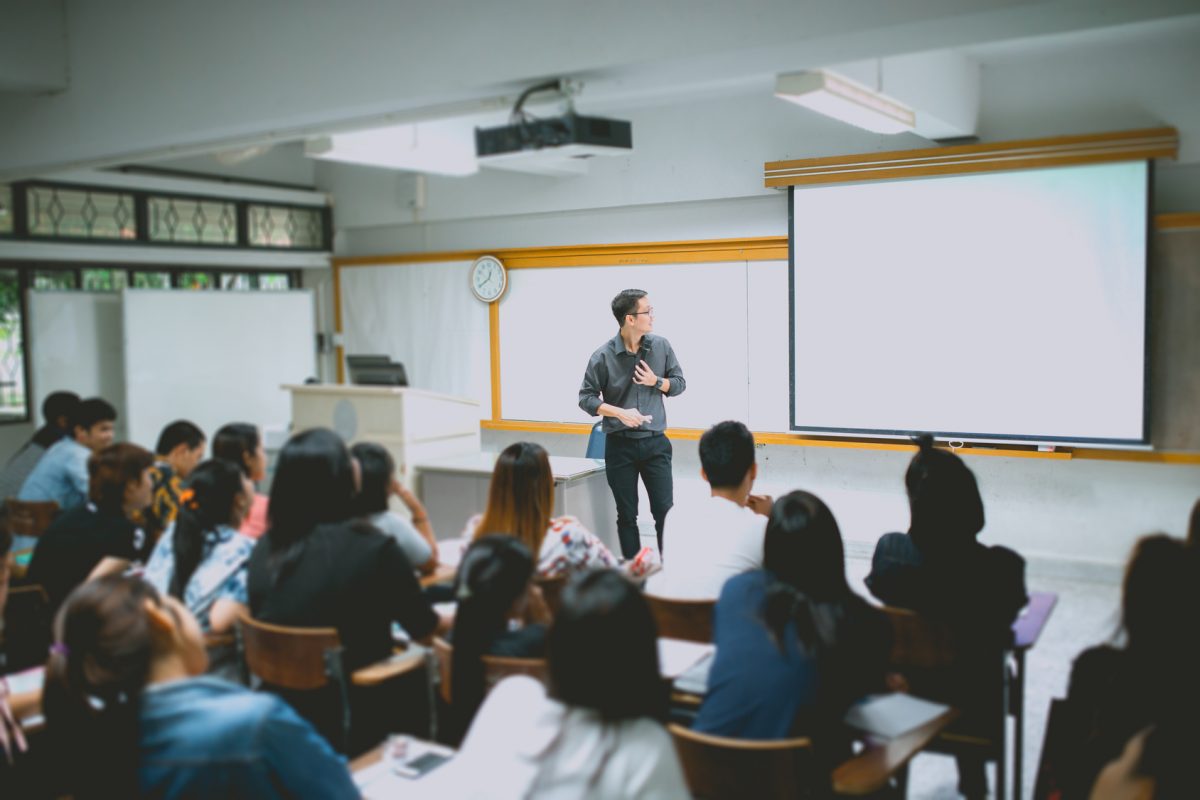 No cliché is more ubiquitous at teacher protests than signs that read, “if you can read this sign, thank a teacher.” That is, unless you disregard variations on the theme of “pay us more.” And yet, student performance on national and international tests suggest that the reading comprehension of most American students does not extend far beyond an understanding of nine-word sentences and basic signage.

In the United States, only a fortunate few acquire reading proficiency. Scores on the National Assessment of Educational Progress (NAEP) have barely budged since 2002. On the 2016 Progress in International Reading Literacy Study (PIRLS), the U.S. average reading score for fourth-grade students trailed 12 education systems and was not significantly different than 15 others. PIRLS test scores have also seen no measurable improvement since 2001. Similarly, the average score of 15-year-old students on the 2015 Program for International Student Assessment (PISA) reading test was lower than 14 education systems and was not measurably different than the international average—or from the 2003 average score.

In Language at the Speed of Sight: How We Read, Why So Many Can’t, And What Can Be Done About It, Mark Seidenberg, a cognitive neuroscientist at the University of Wisconsin-Madison, takes these test results and other indicators of functional illiteracy seriously. Rather than dismiss the scores from reputable reading tests, he argues that they indicate deeply embedded and systematic shortcomings in how college teacher training programs prepare prospective educators.

It would be misleading to characterize the book as merely an examination of teacher education, pedagogy, or education policy. Seidenberg devotes much of Language at the Speed of Sight to discussing what he has spent a long and distinguished career researching: the science of reading.

In just a handful of chapters, he summarizes an immense body of scientific literature about the acquisition and development of reading skills, dysfunctions that may occur during the process, and the environmental, social, and cognitive barriers to mastery. He recognizes, however, that little of what researchers know about the science of reading informs the training of teachers or their instructional practices. In the final three chapters of the book, Seidenberg explores the disconnect between literacy science and public schooling, and what can be done to address it.

The succession of problems that functional illiteracy creates are well known and appear to be incontrovertible. This is especially so for the way that persistent academic struggles limit occupational options and lead to economic stagnation. But vocal and influential defenders of public schooling, namely moderate-turned-leftist Diane Ravitch, claim that American education is mostly a success and that those who say otherwise are democracy-hating tools of the dreaded school privatization movement. According to Ravitch and other defenders of government schools, isolated shortcomings in academic performance are the product of socioeconomic and political factors that can be solved by enacting “progressive” laws and policies.

Seidenberg devotes nearly an entire chapter to countering Ravitch’s critique of reading test scores.  For example, Ravitch argues that there are multiple alternative explanations for the performance of U.S. students on national and international reading tests, and it is to Seidenberg’s credit that he carefully assesses all of them. After all, if Ravitch is correct that the NAEP, PIRLS, and PISA results are equivocal, circumstantial, and mostly irrelevant, then policy prescriptions that change the teaching profession would lead us down the wrong path.

Ravitch argues that students need to know more than ever before, and test results do not reflect these higher demands and more challenging curricula. Moreover, she notes that there have been incremental improvements in test scores across all student groups since 1992. Seidenberg points out that the former is true, and it is the responsibility of schools to meet those demands. The latter gives too much weight to minuscule, mostly insignificant, numerical increases in test scores.

Ravitch also points out that graduation and college enrollment rates have increased steadily even as test scores have stagnated. Seidenberg recognizes that these increases can be attributed to factors that are independent of how much children learn or teaching quality. Numerous anecdotal accounts, empirical studies, and alternative measures, including those frequently highlighted by the Martin Center, call into question the reliability and meaningfulness of graduation and college enrollment metrics.

Ravitch also disagrees with Seidenberg on the macroeconomic relevance of testing outcomes that is often cited by critics of American education. She points out that, despite poor showings on national and international assessments, the U.S. economy is strong, and there are no signs of educationally induced economic stagnation.

Seidenberg, on the other hand, points to the research of Eric Hanushek and Ludger Woessmann, whose research concludes that there is a meaningful relationship between student achievement and GDP growth. He misses a critical point, however, by failing to mention that America’s economic vitality may be due to the ability of U.S.-based corporations to attract workers from abroad. Highly skilled labor is drawn from nations in Europe and the Pacific Rim that have a long record of excellence on international assessments and support highly selective systems of higher education.

The final and most frequent issue cited by Ravitch is the role of poverty and the related concerns of race and ethnicity. Perhaps the U.S. performs poorly because we have a racially and ethnically heterogeneous population and a “disproportionate” number of children in poverty. Seidenberg is wise to spend several pages carefully assessing the poverty argument. Ravitch and many others are eager to blame defenders of the free market for, among many other things, championing laws, policies, and institutions that purportedly reproduce inequalities that systematically create an economic and educational underclass. Based on an analysis of PISA data, Seidenberg finds that U.S. students at all socioeconomic levels, even rich kids, lag compared to their counterparts.

After finding none of Ravitch’s arguments to be persuasive, there is one variable that remains—the “culture of education” that underlies the teaching profession and classroom instruction. Seidenberg is appalled by what he finds. Rather than acting as a bridge between literacy science and the classroom, Seidenberg observes that schools of education are designed to “socialize prospective teachers into an ideology—a set of beliefs and attitudes about children, the nature of education, and the teacher’s role.” The central feature of this ideology is the notion that individuals and groups construct knowledge according to their beliefs and unique experiences. The teacher’s role in this arrangement is not to transmit knowledge but to cultivate and nurture it through collaboration and discovery in partnership with each child.

He is not convinced that schools of education will adopt of any of these initiatives voluntarily.

This constructivist theory of knowledge gives way to the abandonment of practices that have solid empirical support, such as the use of phonics in reading instruction, and the dissemination of pseudoscientific approaches to reading instruction espoused by hucksters like Frank Smith, Kenneth Goodman, and Marie Clay. Of course, most teachers find constructivist theory to be appealing in theory but unworkable in practice, a fact that apparently is lost on the schools of education that trained them to adopt constructivism in the first place.

Seidenberg proposes various ways to reform teacher training programs. They include greater collaboration between education school faculty and literacy scientists, the development of interdisciplinary programs, and changes to the teacher education curriculum, such as requiring teachers to complete an introductory course in linguistics. But he is not convinced that schools of education will adopt of any of these initiatives voluntarily. He concedes that schools of education are “well-established, well-funded, trusted institutions” staffed by an “isolated, inbred community of scholars and practitioners” who “developed an arms-length stance toward research.” And that this intransigence has existed since the emergence of university-based teacher training programs in the late 19th and early 20th century.

Seidenberg also recommends a host of alternatives to teacher training reform—albeit with some reservations. For example, states could raise teacher licensure requirements by adopting the rigorous Massachusetts Test for Educator Licensure (MTEL), but he recognizes that top-down regulatory approaches seldom produce meaningful change. He proposes the use of assistive and other types of educational software to aid instruction, but he is also concerned about the relative costs and benefits of these technologies. He considers whether third-party tutoring or teacher training programs could address the problem more efficiently and effectively but eventually admits that it would be difficult to find a sufficient number of well-trained tutors to staff them.

With most recommendations deemed impractical or unsustainable, the reader will reach the final pages of Mark Seidenberg’s Language at the Speed of Sight: How We Read, Why So Many Can’t, And What Can Be Done About It feeling disheartened about the possibility of transforming teacher education into something firmly grounded in scientific research. And one cannot help but feel a bit misled by the subtitle. As much as we know about how we read and why so many can’t, it’s not apparent from the book what can be done about it.

But we know one thing that clearly won’t help: teacher protests against “insufficient” funding. Maybe their signs should read: “If you can’t read this, protest schools of education!”

Terry Stoops is the Director of Education Studies at the John Locke Foundation.

Jill Biden and the Doctoring of Doctoral Degrees for Nondoctors

Teacher Training and the Construction of Illiteracy

Is the UNC System Serious about Teacher Training Reform?