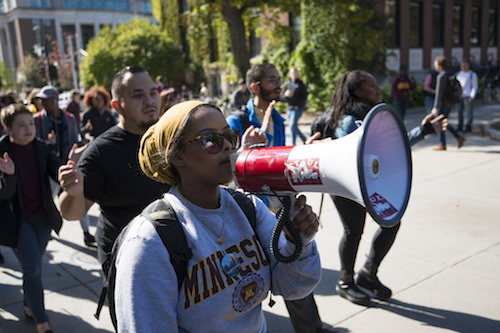 This academic year has been punctuated by a series of high-profile campus protests. Many student grievances have, as in previous years, centered on claims of racial injustice. If next academic year is to be about education rather than protest, faculty and administrators must explore the role they play in both politicizing college life and racializing students.

In April classes at Harvey Mudd College in California were cancelled for two days following student protests primarily focused on “issues of race.” Students at Notre Dame and Middlebury College protested lectures given by Charles Murray. They argued, violently at Middlebury, that his 1994 book The Bell Curve “espoused a racist view that had no place on a college campus.”

In October, students at the University of California, Berkeley demanded campus “safe spaces” exclusively for students of color. Students formed a human chain and blocked the main entrance to the campus; white students were reportedly told to “Go Around!” while students of color were allowed through the blockade.

Most recently, Evergreen State College has made global headlines after students called for Professor Bret Weinstein to be fired. Weinstein publicly questioned a change to the school’s annual “Day of Absence”: instead of black students leaving campus, white students and faculty were asked to stay away for the day. He preferred to teach his biology course and for doing so was subjected to vehement protests. Although Weinstein has become the focus, the protests represent the culmination of a year of tension over perceived racial injustice. This “long simmering discord” was not a response to specific incidents, but a general demand for the college to address “equity” issues and require diversity training for all faculty.

Student protests focusing on race are not new. In 1960, civil rights protesters, including Martin Luther King Jr., joined students at college campuses across Atlanta, Georgia, in marches and sit-ins designed to challenge the racial segregation rife throughout Atlanta at that time. The campaign for civil rights prompted the Berkeley Free Speech Movement. Throughout the 1970s and 1980s, students across America protested against university investments in apartheid South Africa.

There are, however, great differences between today’s student protests and those of yesteryear. Most significantly, previous generations rejected segregation and aspired towards racial equality. Many of today’s protests, on the other hand, seem to rehabilitate demands for segregation.

In 1960, students in Atlanta campaigned for an end to segregated lunch counters; in 2017 students demand segregated safe spaces and accommodation blocks. California State University, Los Angeles, has separate living accommodation for African-American students, while the University of Connecticut has established a “living-learning community” specifically for black male students.

The Free Speech Movement was driven by a belief that all students, whatever their skin color, could cope with hearing views they disagreed with. Today’s protesters, in contrast, as we see at Notre Dame and Middlebury, want to restrict free speech by anyone they call “racist.” At Wesleyan University, students demanded that the newspaper devote front-page space to “marginalized voices” and that the newspaper staff be compelled to undergo “training” in social justice.

Today, students are encouraged by faculty and administrators to identify as members of a racial group and to see racial inequality as pervasive.

Once, the fight against racism was premised on the belief that all people, irrespective of skin color, were equally autonomous, rational, and intelligent. Today’s protesters employ a therapeutic language of safe spaces and healing; they see people of color as victims of “whiteness” and in need of protection from microaggressions.

Colleges themselves have played a fundamental role in bringing about this seismic shift.

Today, students are encouraged by faculty and administrators to identify as members of a racial group and to see racial inequality as pervasive.

One way they have done so is through the reading that schools assign to incoming students. The National Association of Scholars has analyzed the books students are asked to read before arriving on campus. They note that, “In 2016, the three most widely assigned books were virtually identical: recently published nonfiction or memoirs about African Americans suffering from the effects of American racism.” Such books reinforce a view of the U.S. as a deeply racist nation.

Once new students arrive on campus, many colleges make attendance at “diversity training” workshops mandatory. The focus of such workshops is often the differences between people rather than what they have in common. Students are encouraged to see themselves as members of a particular racial group and to view their peers accordingly, instead of as individuals with distinct opinions and beliefs. One student recalls, “The message was clear: know your kind and stick to it. Don’t risk offending people from other backgrounds by trying to understand their worldviews.”

In this way, professors and administrators amplify racial differences between students and give credence to the view that, even within elite institutions, minority students have justifiable grievances.

Furthermore, many students are taught a curriculum (particularly in social science and humanities courses) premised upon a postmodernism that eschews “any notion of objectivity, perceiving knowledge as a construct of power differentials rather than anything that could possibly be mutually agreed upon.” This lends itself to teaching that privileges subjective experiences and personal feelings above objective debate and rational inquiry.

As a result, students are not able to leave their personal circumstances at the door of the classroom and tackle ideas as intellectual equals. Instead, their subjective feelings, drawn from their identity, become an undisputed source of evidence. The more oppressed the speaker, the more respected their response.

Radical pedagogues teach students to recognize themselves as representatives of groups based on race, class, gender, and sexuality and those labels become the starting point for their academic work. The concept of color-blind teaching is rejected and the importance of race is reinforced at every turn.

The politicized classroom becomes a confessional for white students to admit to their inherent guilt and a psychiatrist’s couch for black students to share experiences of victimhood.

The pre-eminence of race moves beyond teaching methods and encompasses what is taught. Campaigns to “decolonize” the curriculum, often led by academics, start from the assumption that students need to see themselves reflected in what is taught. According to this view, a Eurocentric curriculum is an instrument of abuse that black students must be taught to withstand. This racist and patronizing assertion suggests that black students cannot learn Plato, Shakespeare, and Pythagoras and need a curriculum constructed on the basis of biology rather than intellectual merit.

This form of teaching confuses politics and education. What’s important is not the knowledge students acquire but the values they demonstrate. The politicized classroom becomes a confessional for white students to admit to their inherent guilt and a psychiatrist’s couch for black students to share experiences of victimhood.

In this way, campus protests around the issue of race are explicitly encouraged or implicitly condoned by the faculty. Until very recently, Evergreen State officials had largely praised the student protesters and agreed that press reports were being unfair to the college. Evergreen’s president, George Bridges, has reportedly agreed to excuse protesters from homework.

More than fifty faculty members have signed a letter supporting the students and criticizing the way Weinstein has spoken out about the situation. The letter states, “We acknowledge that all of us who have power within the institution share responsibility for the racist actions of others. Furthermore, those of us who are white bear a particularly large share of that responsibility.”

Higher education has moved from promoting universal liberal humanist values to creating a racialized environment where students are supported and encouraged to judge each other according to race and see shared communication as risking racial microaggressions. Until this changes, we will see more campus protests.

When the #MeToo Movement Hits Campuses

How Colleges Themselves Bring About Racial Protests