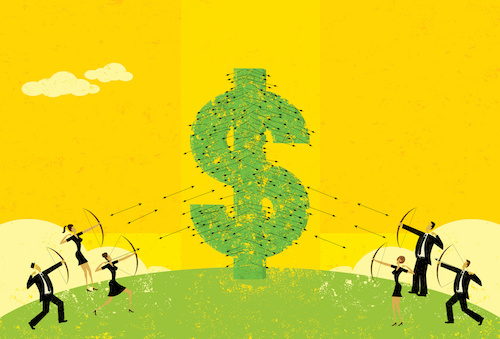 As higher education has become increasingly competitive in recent years, many colleges have had to find creative ways to maintain their enrollment figures and distinguish themselves in the market. For some, this has meant lowering their tuition rates at a time in which inflated prices often seem to be the norm.

Seeing already-struggling colleges constraining their revenue sources, however, has some observers raising alarm about these institutions’ alleged lack of long-term solvency. But tuition rates are often a poor indicator of what students pay and what colleges receive in revenue. Higher education accounting is complicated by many factors—including financial aid—and university finance is not as black and white as the tuition bill.

Contrary to some analysts’ claims, struggling colleges that reduce tuition rates are not signing their own death certificate. Rather, they are enhancing their competitiveness, which in turn is reaping benefits for students and parents.

Staying competitive is no easy task for colleges, especially now, when demand seems to be deflating. Nationwide enrollment has fallen in eight of the last nine semesters, cumulating in a two percent drop since 2012. The hardest hit schools are small, non-elite public and private schools that lack the branding power of state flagships and elite private universities.

For example, enrollment has fallen dramatically at Elizabeth City State University, one of the smaller schools in the University of North Carolina system. And several small, private colleges in the Tar Heel state, including Belmont Abbey and Peace College, have also experienced concerning drops in enrollment in recent years.

The fact that small schools often have small endowments at their disposal squeezes them into an even tighter financial situation. Large state universities and elite private schools have plenty of financial cushion to absorb enrollment declines thanks to their brimming endowments. Smaller colleges, however, are much more dependent on their students’ tuition dollars and, in turn, their ability to maintain, and if possible grow, their enrollment figures.

In an effort to reverse the trend of falling enrollment and attract new students, some colleges are cutting their tuition significantly. More than 50 public universities have reduced their tuition rates—particularly for out-of-state students—by more than 10 percent in recent years. Dozens of private universities have made similar cuts—such as the University of Charleston, which reduced its tuition from $25,000 to $19,500 in 2012.

And in North Carolina, tuition was reduced to $500 per semester at three schools in the UNC System—UNC-Pembroke, Western Carolina, and Elizabeth City State. Belmont Abbey College and Peace College also reduced their tuition rates considerably in 2013 and 2012, respectively.

Some question the long-term viability of such strategies. Falling demand for college and pressure to reduce tuition seem to paint a very bleak picture of college finances. In 2014, financial reports indicated that only 13 percent of all non-profit colleges are “truly safe” from permanent closure in the near future. Moody’s, the primary credit rating agency for non-profit colleges, has downgraded dozens of colleges’ credit ratings since then, as the situation has appeared to further deteriorate. And in September 2015, Moody’s analysts predicted that the rate of college closures—normally around five per year—would triple by the end of 2017.

Yet there is a strong case to be made that higher education is not on the brink of catastrophe. The rate of college closures has been holding steady at the historical five-per-year average. Most colleges, while perhaps struggling, are nonetheless finding ways to pay the bills each year. And many others are actually thriving, even while doing the once-unthinkable: slashing tuition prices. Let’s take a closer look at university finances to find out how that’s possible.

First and foremost, tuition cuts do not yield proportional decreases in revenues. Many institutions are simply moving from a “high price, high discount” model to a “low price, low discount” model. In such cases, colleges reduce tuition while reducing the aid they provide. This allows them to advertise a lower sticker price and attract prospective students by providing them with a clearer idea of the costs they will face.

Interestingly, the effect on students’ cost of attendance tends to be mixed. For example, in 2015 Converse College in South Carolina reduced its tuition by 43 percent, but average attendance costs fell by less than three percent. And at the University of Charleston, the average cost of attendance actually rose for some students after the school reduced its tuition by over 20 percent. Housing and book prices, rising student fees, etc., may be to blame. Going forward, universities seeking an even better competitive advantage will have to address those costs, too.

Even when increased enrollment does not offset tuition cuts, colleges have found ways to keep themselves afloat. For example, to cope with its cuts, Belmont Abbey College reduced its administrative staff by nearly 20 percent—cutting $1 million from its $26 million budget. And at the University of Southern Mississippi, administrative staff were laid off in lieu of selling buildings and shuttering academic programs.

For some, such circumstances may be less than ideal, but these examples show that colleges have room to trim administrative fat and the ability to make tough financial decisions—even if doing so always seems to be a last resort. This cost side of the equation is important, especially for public universities. For when they seek to reduce tuition and expand enrollment without cutting expenses, the financial burden shifts even more to taxpayers.

This year, for example, the UNC system is requesting an additional $231 million from the General Assembly, on top of its almost $2.8 billion state budget, to cover a projected 2 percent enrollment increase. That projection may be due in part to a new program that freezes in-state students’ tuition for four years, as well as drastic tuition reductions at Pembroke, Western Carolina, and Elizabeth City. But if these universities continue to boost enrollment, and don’t address things such as unnecessary administrative growth, state spending will likely ratchet up.

All in all, however, university finances today are marked by several positive, though often unheralded, changes. Competition and other factors are lowering tuition, spurring efficiency, and giving the public a more transparent picture of college costs. Doomsday stories about college finances may grab attention now, but this new dynamic is what will really shape the future.