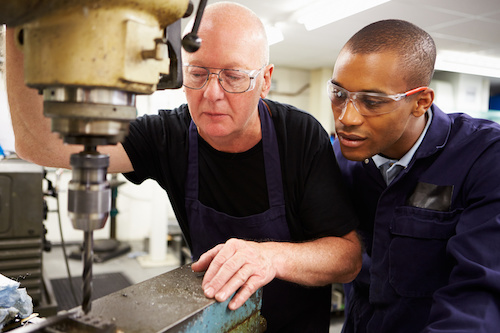 Recently, a bill was introduced in the North Carolina legislature that would shift control of the state’s apprenticeship program from the department of commerce to the community college system. The goal is to streamline the program and make it more aligned with some of the community colleges’ workforce development initiatives.

The program, “ApprenticeshipNC,” has been receiving more attention lately, as lawmakers pivot to vocational training programs as a way to boost the education and earning potential of recent high school graduates. The program helps to provide students more postsecondary options and gives them an effective, low-cost alternative to the traditional college pathway.

A vast improvement to the previous “college for all” approach, offering a variety of programs means students can more easily match their education to their aptitudes and interests. In the long run that will help more students learn marketable skills and find meaningful, stable careers.

NC’s apprenticeship program is relatively straightforward. Students indicate their interest in the program and desired career path, and ApprenticeshipNC matches them with a suitable company. Together, along with a local community college, the student and company arrange a class and work schedule. The company generally covers the cost of schooling and pays the apprentice a wage. It lasts one to four years, depending on arrangements the apprentice and company decide. Apprentices can work to become, for instance, machinists and electricians, all while gaining experience with regional and even national companies.

Costs appear to be minimal. Currently, the state sets aside $500,000 annually in the department of commerce’s budget to administer the program. The most recent data indicate that over 5,000 students sign up for the program each year. This means that the state’s investment per pupil in the program is quite small, less than $100. This compares quite favorably, for example, to state investment per pupil in the state’s university system, which is about $17,000 annually.

If there is one knock against ApprenticeshipNC, it is that retention within the program appears to need improvement. Only about 50 percent of participants continue after their first year. The data are incomplete, so it is not clear whether these students completed their program or decided to quit. Still, of those who stopped participating, approximately 70 percent had steady employment within five years. Forty percent also went on to complete more advanced degrees and certificate programs.

North Carolina is not alone in offering an apprenticeship program. Nineteen other states offer one. At the federal level, the U.S. Department of Labor has set up a program of “registered apprenticeships” that ensures that students who complete a recognized program are able to use their trade nationally. It also helps regulate completion requirements across state programs. In North Carolina and elsewhere, 2,000 hours of work and 144 classroom hours is the standard.

Such extensive training and education seems to pay off, as both the apprentice and the sponsoring company generally find the endeavor very profitable. Apprentices can expect to boost their lifetime earnings by around $300,000 over their peers who only complete high school. And private companies investing in the program also receive the benefit of creating a pipeline of trained, highly-skilled workers who are familiar with their operations.

For all the talk of the U.S. lagging relative to Europe in regards to “college for all,” it is interesting there is not more discussion devoted to this apprenticeship gap. If the United States could learn anything from our European neighbors, it is not to consider college as the end-all of postsecondary education. More policymakers should consider not only the potential benefits of college, but also its costs—and its alternatives.

If there is one point of reservation for promoting more apprenticeship programs, it is the retention rate, which as noted above is around 50 percent here in North Carolina. Though certainly an area needing improvement going forward, one should not think from this that apprenticeships are fatally flawed.

Additionally, it should be noted that a 50 percent retention rate is not far off from the six-year graduation rates of some North Carolina universities, or the national six-year average.

Moreover, relatively low retention rates could be expected in apprenticeships, since the student often invests little personally into his or her education and the company generally picks up the tab. In other words, the cost of leaving apprenticeship programs is quite small for both the student and the taxpayer. This is, of course, not the case when it comes to dropping out of college, where the opportunity costs and wasted resources can be significant.

With so much to gain and so little to lose from apprenticeships, it is an encouraging sign that the North Carolina legislature is beginning to pay more attention to them. Placing ApprenticeshipNC in the purview of the community college system seems to be a sensible way to improve the program, ease the process of coordinating students’ schedules, and cut out the “middle man” that now is the commerce department.

On the other hand, the North Carolina proposal is, in fact, quite unorthodox. Indeed, every other state’s apprenticeship program operates under its commerce or labor department, working in conjunction with the federal Labor Department, as described earlier.

This makes some sense, considering that determining wages and work schedules probably would be best accomplished by well-qualified industry experts—not community college administrators. So the success of this new proposal would likely hinge on administrators’ ability to effectively delegate some of the responsibilities of running the apprenticeship program.

Still, if matching students to careers is the goal, the legislature should continue to explore ways to improve and expand NC’s apprenticeship program. Rather than spend millions on the fantasy that college is for everyone, the state could receive big returns by investing in the postsecondary education most suitable to the fields in which many North Carolinians will eventually find work. Whether the latest bill will drastically improve ApprenticeshipNC remains to be seen, but policymakers’ renewed focus on apprenticeships is a positive sign.