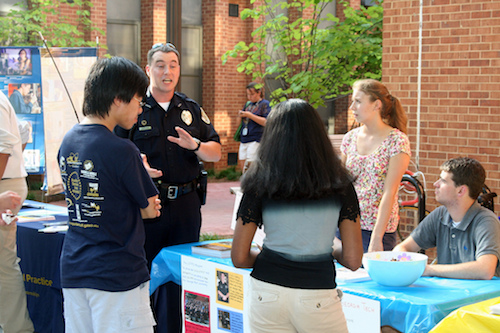 Concerns over campus safety—both founded and unfounded—have escalated recently. In North Carolina, for example, sexual assault charges against UNC-Chapel Hill and UNC-Charlotte football players made headlines. And even more high-profile cases, such as the Brock Turner rape case and the recent attack on Ohio State’s campus, have captured a national audience.

Though these stories have created a firestorm of public rage, often unnoticed is that American colleges are actually quite safe, with campus crime rates significantly lower than the national crime rate. Even schools in crime-heavy areas—such as Temple University in Philadelphia—find that their campuses are still much safer than the neighborhoods just down the street.

Nevertheless, administrators are feeling pressure to do something to prevent tragedies—and bad publicity—from coming to their schools. The amount of spending and staff dedicated to campus security reflects this urgency, as both have skyrocketed in recent years.

But most of the dangers students face are beyond the control of campus administrators—either occurring outside of their purview or stemming from larger social issues. Not surprisingly, the extra spending on campus security has been unsuccessful in curbing the most pressing safety issues, such as alcohol-fueled assault and sexual violence.

The fact that these crimes stem largely from social issues beyond the control of administrators has not stopped campuses from spending hundreds of millions of dollars—and counting—every year on new security systems, police officers, and trained staff.

For instance, the number of full-time campus law enforcement officers nationwide grew 16 percent between 2005 and 2012, outpacing the 11 percent growth in student enrollment. Additionally, in the past three years two thirds of colleges have increased their public safety budgets. It is estimated that by 2018 campus security spending will exceed $400 million a year.

Of course, some of this spending is motivated by the need to comply with an increasingly strict set of federal guidelines, most notably the Clery Act, which requires colleges to disclose their crime statistics annually. Enforcement of these federal rules has been stringent, with the Department of Education (DOE) routinely punishing one or two schools each year for compliance failures. These fines not only carry bad publicity, but also financial burdens often to the tune of several hundred thousand dollars.

Such micromanagement also has given rise to a variety of questionable school policies regarding sexual assault prevention and adjudication. Most famously, there was the DOE’s 2011 “Dear Colleague” letter mandating that colleges use the preponderance of the evidence standard in adjudicating sexual assault cases. In addition to placing an unconstitutional burden on the accused, it has caused administrators to devote more time to compliance.

Because of this constantly growing set of laws and guidelines, many schools are increasing spending on administrators with no connection to academics. For example, the University of North Carolina system spends $1.52 million on administrators whose sole job is to check-off boxes making sure campuses adhere to the Clery Act.

Elsewhere in the UNC system, campuses are doing anything they can to appear as though they are beefing up security in these supposedly dangerous times. For instance, UNC-Charlotte installed a campus-wide lockdown system for active shooter situations. And its public safety department hired a technician to monitor the school’s 400 hundred security cameras.

Many schools have instituted costly alcohol education programs, with the ultimate goal being to curb the campus culture of binge drinking. At UNC-Chapel Hill, for example, all freshmen are required to complete an “AlcoholEdu” module within the first few weeks of the school year.

The results of these investments have been, at best, mixed. On the positive side, theft—by far the most common crime students face—has fallen by nearly 50 percent since 2008.

But massive public safety spending, overbearing and costly federal regulations, and the implementation of alcohol training programs have failed to slow the rate of the most serious crimes to which students fall victim, such as assault and sexual violence. Alcohol consumption is still the main contributing factor in the these crimes.

This is largely because 93 percent of all violent crimes occur off campus, outside of the purview of campus administrators and the public safety officers they hire. The role of alcohol in these crimes is unmistakable. For instance, 66 percent of sexual assaults against students occur off campus; in roughly three out of four of those cases, the primary reason for the assault is that the victim is so intoxicated he or she can’t consent to or refuse intercourse.

The main area in which administrators can argue their safety programs have had some substantive payoff is alcohol consumption. On the whole, alcohol abuse among students has been declining, with the percentage of students reporting binge drinking in the past month down 5 percent from 2012 to 2015. But while this drop may be correlated with the adoption of mandatory alcohol education programs, to argue a causation between the two is much harder.

For instance, the decline in alcohol abuse among college students is roughly in line with the decline in alcohol abuse among 8th graders and high school seniors—the vast majority of whom have probably never been exposed to similar programs. Additionally, studies show that college freshmen—the students most recently exposed to these education programs—are in fact the most likely to abuse alcohol, as drinking tends to be most frequent during students’ first semester in college before tapering off in later semesters.

Expensive campus security initiatives may sound good in a press release, but the evidence that they actually make college students safer is scant. This does not mean, however, that the situation is hopeless. There are alternative ways to protect students off-campus, with the added benefit of not breaking the taxpayer bank.

For example, in December 2015 UNC-Charlotte launched the “Niner’s Choice” program in which the university confers official recognition to select apartment complexes nearby campus. In exchange, these complexes work with university police to implement agreed-upon safety standards and procedures for residents. It may not solve every problem, but it is progress in that UNC-Charlotte recognizes that the primary dangers students face are off-campus.

Student safety should be a top concern, but no amount of spending will make every street off-campus safe, and administrators are still a long way off from changing the campus culture of drinking. The next wave of campus security initiatives should be grounded in reality and built around proven, innovative solutions—such as the Niner’s Choice program, and others like it.