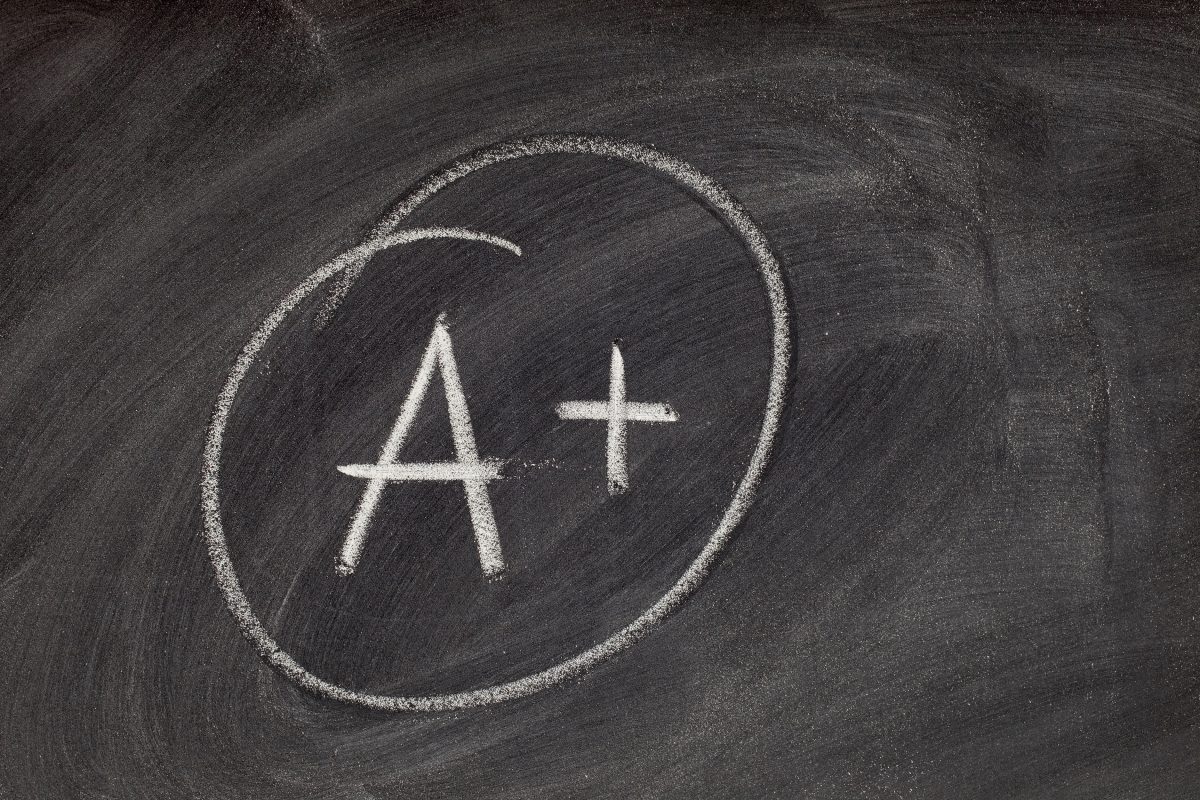 When I was in high school in the mid-1990s, we were all required to swim in gym class. This was before wokeness. Since then, concerns over “accessibility,” “inclusion,” “acceptance,” and changing clothes in a locker room have all but killed physical education. The decline was already in motion, even back then. The girls and boys were required to swim on different days to avoid potential embarrassment from being seen in swimwear. At the beginning of our swimming unit, our gym “teacher” handed each of us a contract on which we indicated the grade we desired for the quarter.

To get an “A,” you had to do forty pool laps (four different strokes for ten laps each) during every swim session. Thirty laps with three strokes would earn a “B.” A “C” was twenty laps per session using two strokes. Anything less, presumably, was a failing grade. When you had completed your laps, you were allowed to play water polo in one end of the pool. I always signed up for a “B” to ensure a little more polo. Looking back though, this “contract” was a sham.

First of all, the gym teachers spent the entire class in the shallow end with the two kids who couldn’t swim, trying to squeeze blood from a stone. We knew the teachers weren’t counting laps. And they knew that we knew they weren’t counting. Thus, their real demand was to complete enough swimming that we could plausibly argue we had held up our end of the contract. Most of us did half of the laps we had promised, then got to polo. I don’t know what grades the students who couldn’t swim received, but something tells me they weren’t “Fs.” After all: that wasn’t an option in the contract.

There was no real “education” involved here because there was no teaching involved. We were all just going through the motions. A grade of “A” was as achievable for the slowest swimmers with the poorest form as it was for the members of the varsity swim team. Just (pretend to) complete your laps. The weakness of this particular curriculum is perhaps of limited importance: those of us who were already able to swim weren’t going to drown; the vast majority of us would never do any competitive swimming; and few if any of us adopt regular swimming as a part of a physical fitness regimen.

Sadly, though, the idea of “contract-grading” is now gaining prevalence in disciplines of critical academic importance–not only in high schools, but in many prominent colleges and universities. This development is only the latest front in a larger war on intellectual excellence, where the focus has now moved from lowering standards to eliminating them.

Take, for example, my own field of English. I work at a university with a large population of first-generation college students. Many of them work full-time jobs, and a significant number of them speak English as a second language. Instruction at my institution is in English, so these students face significant barriers. I want to stress that I am not offering a critique of these students.

Although I know rudimentary Spanish, I have little doubt that I would likely fail a college composition course where I had to write in that language. But the difficulties faced by our population ensure that a much larger proportion of students fail freshman composition than at most universities. Because passage rates in general education courses are a major metric by which coordinating boards and legislatures assess institutional effectiveness, our lower ratings are a great concern at my institution.

Needless to say, rewarding minimal effort is not a great way to cultivate any skill.

There are a number of ways to address this problem. The university could increase admission standards. We could build in more extracurricular opportunities for remediation of writing skills. We could coordinate with local high schools, ensuring that the curriculum at that level is calibrated to ensure student readiness for college writing. Potential solutions could be implemented at the institutional level or by individual instructors. I have been at my school for over a decade, and I have observed all of these measures enacted to some degree. Our passing rates remain stubbornly below average. The problem is intractable.

In the face of these difficulties, many faculty are implementing some form of “contract-grading” (sometimes called “labor-based grading”). In the context of a writing course, it looks something like this: in the first week, each student elects a) how much writing they will do for the course, b) how much drafting and revision will be done for that writing, c) when the writing will be submitted, and d) how much “peer-review” of classmates’ writing he will do. Various choices on these bases correlate with different grades in the course. Assuming the student does the laps he promised, he will receive his preferred grade…regardless of the quality or competence of the writing.

Of course, there are glaring problems with such a method of assessment and evaluation. Is it true, for example, that producing a certain amount of writing entails the same degree of labor for all students? Surely, it is possible that some students could produce five typed pages in two hours, while another student might take seven hours to do the same task. In fact, this disparity is likely–especially at institutions that now admit students with widely-divergent levels of preparedness. Given these disparities, how can an instructor enact a system of “labor-based grading” when there is no reliable metric to indicate how much labor any particular student put into an assignment. Here, what matters is the trying. And trying is good. But when there is no possibility of trying and nevertheless failing, students have an incentive to try less hard. Needless to say, rewarding minimal effort is not a great way to cultivate any skill.

An advocate of contract-grading might say that their assessment doesn’t hinge on the amount of time the student spends. Rather, they may claim that the assignments are designed such that (if completed) the student’s writing will necessarily improve to some degree. The assumption here is that it’s not merely the trying that earns a reward–it is the improvement. Thus, as long as there is some improvement (never mind that there is a concerted effort to avoid both articulating a method for quantifying “improvement” and a minimum standard for such), the student will be deemed ready for more advanced courses and awarded a grade that reflects this (arbitrary) assessment. Further, improvement largely depends on the effort one puts forth–and as illustrated above, “contract-grading” disincentivizes effort.

None of this is to say anything regarding the effects of contract-grading on students with real aptitude. When the members of the varsity swim team receive their “A” in full knowledge that slower swimmers with poor form were awarded the same grade simply for getting across the pool, it is obvious that this might inhibit the further development of skills in those who might (with some encouragement and rewarding of their talent) refine them to a much greater degree. In short, contract-grading not only discourages striving for excellence; it refuses to even acknowledge any pre-existing aptitude.

Contract-grading also has effects beyond the classroom and beyond the university. Many employers still adhere to the old-fashioned idea that a course grade is a reliable indicator of a basic level of knowledge and competence, but contract-based assessment ensures that any meaningful comparison of job candidates’ academic work is impossible. Two applicants may have both received an “A” in their writing courses–but one may have received the grade for her considerable aptitude in writing, while the other may have gotten the “A” simply for doing the laps. (For many instructors, this is precisely the point: to erode the advantages that “privileged” applicants have in the hiring process).

Not only could the hiring of inferior applicants weaken organizational strength and effectiveness, but it also undermines public faith in the university system. Once employers come to realize that course grades no longer correlate with any baseline aptitude or skills-oriented competence, they deprioritize the university degree in their considerations. This ultimately burns the universities themselves: as prospective students come to recognize that the value of a four-year degree is significantly diminished, they may decide to avoid college altogether.

In short, the rise of contract-grading and labor-based grading tracks with the general trend in the universities at large: in the name of “accessibility” and “inclusion,” standards are being eliminated and excellence discouraged. Along the way, we condition students to avoid any kind of striving. For what? Presumably, this is all in service of the “equity” agenda, which asserts that all disparities in ability, performance, and outcome must be products of “systemic injustice.” Thus, the “system” must be demolished. By artificially boosting students with less aptitude or dedication, and handicapping those with considerable ability and motivation, we move ever closer to some fetishized notion of “social justice.”

Sadly, the resulting society will be one with less aspiration, less striving, less competence, less excellence, and less meaningful achievement. These realities will also mean less wealth, less health, and less power, on both the individual and national levels. So much for personal “empowerment.”

Many readers familiar with the general looniness of English departments might be inclined to say “Well, that would never happen in my discipline!” Think again. It’s probably already there. In your math departments. Your psychology departments. Your history departments. Even your science and engineering departments. Nevertheless, those opposed to these attacks on excellence must remember: this is not an isolated phenomenon. Rather, contract-grading is only one particular manifestation of the larger attempt to remake higher education. If successful, our universities will become nothing more than state-funded houses of ideological indoctrination. In this way, our opponents seek to remake the nation.

Adam Ellwanger is an associate professor who studies rhetoric, writing, and politics. He is a member of Heterodox Academy, an organization that works to increase viewpoint diversity in American universities. You can reach him at adamellwanger@gmail.com.

“Contract-Grading” and the War Against Academic Excellence

An Innovative Solution to the Failures of Peer Review

The Totalitarian Impulse in the Title IX Racket