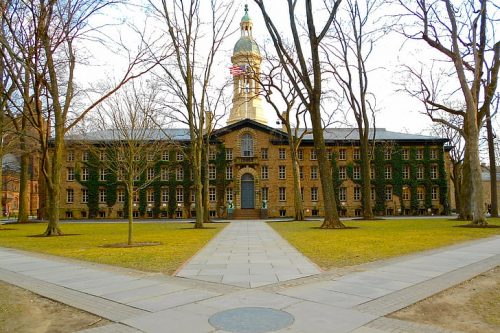 Hundreds, maybe thousands, of colleges and universities will soon be wiped out by an unprecedented combination of financial exigency and revolutionary ideology. Professors at collapsing institutions are desperate to leave, and slews of senior faculty, including some very distinguished ones, have taken early retirement.

Empty campuses will flood the market, amid extreme softening in the commercial real estate sector more generally. Eager buyers might consider the leafy 60-acre campus of MacMurray College, an Illinois liberal arts school that closed its doors in May after 174 years in business. The campuses of Oregon’s Concordia University-Portland and Ohio’s Urbana University also became available this spring.

Shrewd investors buy when there’s blood in the streets. For academia, that time is now.

Many Americans cherish liberal education because it has immeasurably enriched their lives, and because it disposes citizens against every sort of tyranny. Some of these people have the means to help found a new university—one dedicated to free and open inquiry into all areas of human experience, in whole and part, and to sheltering the guttering flames of memory, tradition, and language from the blustering winds of justice, equality, and job training.

But would such an endeavor be financially viable? Could any school of liberal learning that does not already have strong roots hope to survive in the wasteland of higher education? Could it hope to seed new growths that might help to reclaim liberal education for future generations of Americans?

I believe the answer to all these questions is yes, and I’m not alone in this view. In his book The University We Need: Reforming American Higher Education, the distinguished historian Warren Treadgold presents a practical plan for how to get a new institution up and running. A thought experiment may help to make the case.

Imagine that we had $500 million to found a new institution, with a fraction of that money to be used for start-up costs and the rest for a permanent endowment. More than a few people do have such wealth. What guiding ideas would animate our university? What principles would help it to succeed? What steps would be needed to put it on a firm foundation?

John Henry Newman observed in The Idea of a University that universities are nothing if not places of teaching and learning. Universities exist to cultivate young minds so that they might be able to enter “with comparative ease into any subject of thought,” to take up “with aptitude any science or profession,” and, above all, “to form an instinctive just estimate of things as they pass before us.”

Those noble aims require professors who, possessing such capabilities themselves, model the ethics as well as the love of learning—the habits and practices of inquiry, interpretation, judgment, debate, and expression they received from their own teachers, often with difficulty but ultimately with gratitude—and are able to articulate a broad view of the place of their particular academic disciplines in a well-formed mind and their contribution to a rich and meaningful life. America has many scholars like that, and many would love to teach at a school where they’d be surrounded by like-minded people.

Heraclitus wrote that character is destiny; Plato, that the beginning is the greatest part of every work. Everything depends on the magnanimity and prudence of the founders.

The university’s planning committee, which might also constitute the core of its first board of trustees, must consist of distinguished exponents and courageous defenders of a broad education in the arts, humanities, and natural and social sciences—individuals fluent in multiple languages of learning, including some who have served as deans (like Eva Brann of St. John’s College) and presidents (like Larry Arnn of Hillsdale).

The committee’s essential tasks will include drafting a mission statement, establishing an undergraduate curriculum, and recruiting outstanding faculty who can chair departments and fill them with fine scholars and gifted teachers. (Graduate programs may be expected to grow organically over time.)

Universities themselves promote intellectual and spiritual slavishness in neglecting to teach the precious treasures of the Western tradition.

It is now virtually impossible to graduate from college without learning about the multiple forms of systematic oppression that ostensibly plague our society. But universities themselves promote intellectual and spiritual slavishness in neglecting to teach the precious treasures of the Western tradition; in narrowly preparing students to plug as functionaries into what the philosopher Josef Pieper called the world of “total work;” and especially in conditioning them to march beneath the crude and shifting banners of social justice.

A university is properly a place of leisure (in Greek, scholē—the root of our word “school”)s where undergraduates, shielded from the noise of the day and the press of service to society, can grow and ripen into mature individuality. Our university must be beholden to no outside entity, including philanthropies and corporations. It must receive no federal funds, which would otherwise subject it to federal regulation. Its administration must be minimal, non-professional, and as far as possible recruited from within, with all major offices held by faculty who continue to teach (even if only occasionally).

Most important, realizing the vision laid out above means saying no to all those who would try to inject politics into the institution.

The university should depart from AAUP best practices only in holding itself to even higher standards of internal governance. Faculty must have the first and last word on all academic matters, and have voting representatives on the governing board. Professors must be centrally involved in the admissions process, which should employ rigorously academic criteria in selecting students. Teaching loads should be low enough to support scholarship and allow for extensive service—in any case, no more than two courses per semester.

The campus culture should be one of conviviality and celebration. The university should not stint on materials and spaces for artistic production, exhibition, and performance. It should celebrate students’ intellectual and artistic achievements with prizes and public ceremonies for outstanding accomplishments. (The same goes for excellent teaching and scholarship among the faculty.)

As for athletics, the school should encourage intramural sports and provide good facilities for this purpose, but coaching should be unpaid and voluntary. It should spend generously on attractive, well-lit classrooms, libraries, and places of assembly and worship, not on climbing walls and esports lounges.

It must eschew pedagogically superfluous technologies and other bells and whistles.

Newman famously described the university as “an Alma Mater, knowing its children one by one, not a foundry, or a mint, or a treadmill.” The university that lives up to this forgotten standard, nourishing its children on knowledge painstakingly preserved, cultivated, and transmitted from generation to generation, will not fail to attract excellent faculty and students and to produce grateful and generous alumni.

Indeed: any prestigious university that stuck entirely to sound education would be such an anomaly today that it would become a beacon for serious students and teachers.

For higher education, as for the nation as a whole, no future good can grow without turning the rich soil of the past. We still have the tools to do what is necessary, and it would be supremely foolish to let them rust from disuse. Let’s get to work.