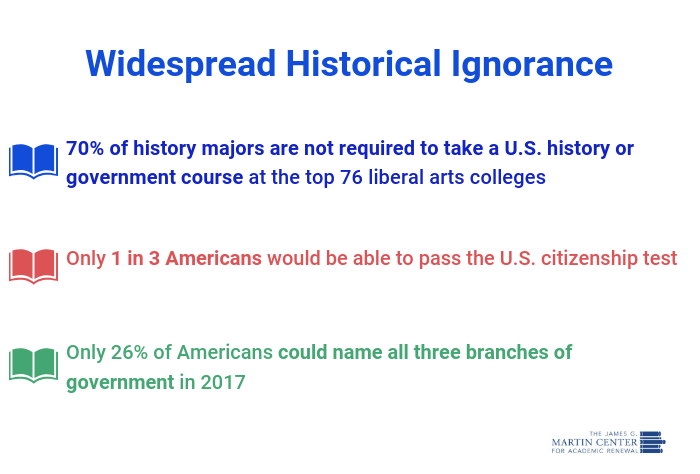 Colleges and universities across the country don’t require students to study history.

Although students at many colleges are “technically” required to take a history course to fulfill their general education requirements, many institutions are extremely lenient about what counts as a foundational history class.

For example, instead of taking a survey course in American history, a student at UNC-Chapel Hill can easily fulfill their general education history requirement by taking a course entitled “Love and Politics in Early India” or “Samurai, Monks, and Pirates: History and Historiography of Japan’s Long 16th Century.”

A 2016 report from the American Council of Trustees and Alumni (ACTA) called the lack of knowledge of American history “a crisis in civic education.”

Every year for the past 11 years, ACTA grades colleges and universities based on whether they require key subjects such as history, math, and economics in their general education curricula. ACTA gives schools “credit” for the history/U.S. Government requirement if they require students to take “a survey course in either U.S. government or history with enough chronological and/or topical breadth to expose students to the sweep of American history and institutions.”

All in all, ACTA has found that only 18 percent of four-year colleges require a foundational course in US history or government. Even worse, 70 percent of the nation’s top colleges do not require history majors to take a course in U.S. history.

But the bleak numbers don’t stop there. Countless surveys reveal just how ignorant Americans are of their own history. According to a 2018 survey conducted by the Woodrow Wilson National Fellowship Foundation, only 1 in 3 Americans would be able to pass the U.S. citizenship test. A 2011 Newsweek survey found that 70 percent of Americans didn’t know that the Constitution is the “supreme law of the land.” And according to the Annenberg Public Policy Center, 22 percent of Americans cannot name any of the three branches of government. In 2017, only 26 percent could name all three branches.

The National Association of Scholars found that 16 of the top 50 colleges “had mandatory or preferred survey courses in American history in 1964.” Nearly 30 years later in 1993, that number was zero.

A 2017 C-SPAN survey found that 90 percent of likely voters agreed with the following statement: “Decisions made by the U.S. Supreme Court have an impact on my everyday life as a citizen.” But 57 percent couldn’t name a single Supreme Court justice.

Universities, however, don’t only fail to teach American history—they actively promote material that depicts America as racist, sexist, xenophobic, and fundamentally immoral. Pseudo-historians like Howard Zinn and error-ridden publications such as the 1619 Project have gained special prominence in both the K-12 and higher education systems.

Speaking Out Against Censorship in Academia