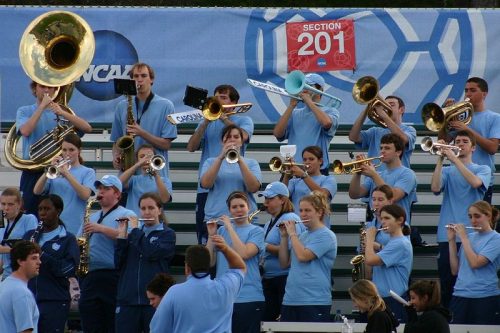 On July 13, a dozen people from the Union Soldier Campaign protested to get leaders of the University of North Carolina at Chapel Hill to drop “Tar Heels” as the school’s nickname.

The group, led by UNC alumnus Willian Thorpe, claims that cheering for the “Tar Heels” is cheering “for the essence of white supremacy.” Thorpe cites the Confederate origin story from 1863 where Confederate soldiers “stood their ground against Northern aggression and fought against the values and ideals of this country.”

However, the name isn’t so simple. It has a convoluted and controversial history, as detailed by UNC history professor Jim Leloudis. “Tar Heel” comes from two different periods of history. One story stems from Civil War history. Leloudis notes that many Confederate veterans from North Carolina wore a “Tar Heel” as a symbol of state pride during Reconstruction.

The other origin story comes from North Carolina’s booming turpentine business in the 18th century. North Carolina produced 70 percent of the colonies’ tar, a derivative of turpentine, and contributed to the North’s shipbuilding industry. Many workers, black and white, were poor and could not afford shoes, so they were seen with tar on their feet. “Tar Heels” became a derogatory term that signaled low socio-economic status.

In both stories, the name “Tar Heel” has negative connotations. Since Chapel Hill adopted the nickname in the mid-1880s, it has become a household name that is used with pride.

As public institutions of all kinds re-evaluate their ties with racism, renaming buildings or mascots has become an open debate. In 2006, the NCAA approved a policy that required colleges to drop mascots that were “hostile or abusive” to Native Americans. Interpreting “Tar Heel” as a problematic nickname, though, is a recent development. It didn’t appear in a 2015 Splinter News article, for instance, that listed offensive college mascots or nicknames. And at least one history professor at Chapel Hill argues against “Tar Heels” being dropped.

“Tar Heels” has long lost its association with the Confederacy; it has now become identified with UNC without much baggage. As colleges grapple with their racist pasts and present-day legacy, they may cave to activist demands for changes, but not all of them are equally deserving of attention.