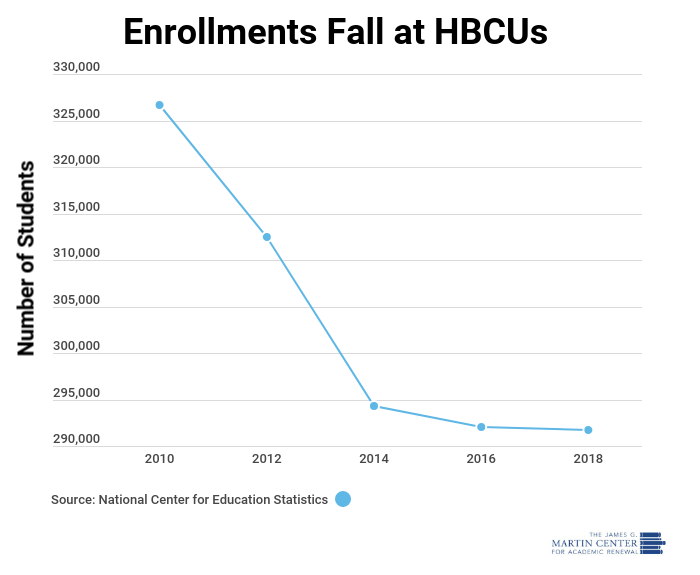 Historically Black Colleges and Universities (HBCUs) were founded to serve African American students whom white colleges would not admit.

The University of North Carolina wouldn’t admit black undergraduates until 1955. As institutions and universities in the South kept out black students, colleges beyond the South implemented quotas to limit their admission. Shortly after the Civil War, African Americans established black colleges in the South with the help of religious groups from the North.

Today, 101 HBCUs are scattered across 19 states, Washington DC, and the U.S. Virgin Islands. The most prestigious are Howard University in DC, Spelman College in Atlanta, GA, and Hampton University in Hampton, VA. Oprah Winfrey, Martin Luther King Jr., and Thurgood Marshall attended HBCUs, which have given many students a sense of belonging and keep alive a unique campus culture.

But enrollment in recent years has been slipping. About 327,000 students chose an HBCU in 2010, but only 292,000 did so in 2018, a 10.7 percent decrease. African American students also have more debt than white students: Alumni from HBCUs take on 32 percent more debt than students at other public colleges.

For many students, though, an HBCU means mobility. A study from the Rutgers Center for Minority Serving Institutions found that “while HBCUs enroll more low-income students than competing colleges, nearly 70 percent of HBCU students end up with at least middle-class incomes.” HBCUs account for 20 percent of black students who complete bachelor’s degrees and 27 percent of black students with a STEM degree, according to a study by the Brookings Institution.

Not all is rosy, however. HBCU dropout rates are quite high. The HBCU graduation rate is only 35 percent, according to the Thurgood Marshall College Fund, compared to a 62 percent graduation rate for all four-year colleges.

Lower graduation rates are partially driven by the higher numbers of low-income students HBCUs accept who come from low-performing K-12 public schools. The “lack of readiness for college is a major culprit in low graduation rates, as the majority of students who begin in remedial courses never complete their college degrees,” a study from the National Center for Public Policy and Higher Education noted.

This unpreparedness isn’t unique to HBCUs, either. “The vast majority of public two-and four-year colleges report enrolling students—more than half a million of them—who are not ready for college-level work,” the Hechinger Report noted.

It’s not clear whether HBCUs will reverse their enrollment declines, but many students still see them as attractive and an example of the variety within American higher education.