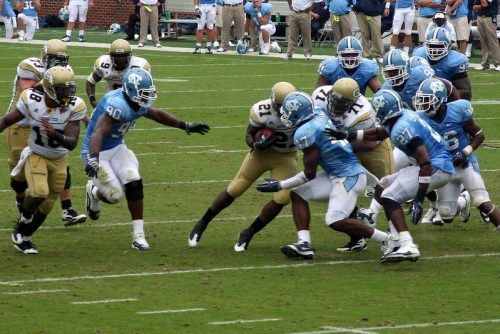 To reach far-flung towns, private planes can be indispensable. The University of North Carolina system, for instance, has an air fleet to shuttle doctors around the state. UNC Air Operations expands the reach of high-quality health care to remote parts of the state and allows doctors to train medical students while still practicing medicine.

A Martin Center review of public records found that, from September 2018 to August 2019, the UNC-Chapel Hill athletics department was billed $125,825 for UNC Air trips and the UNC system office was billed $71,578. Many of those flights were for trips within a two-hour drive or to large cities serviced by commercial airlines.

In total, athletics and administrative flights made up about 27 percent of the roughly $725,000 in flight expenses, while about 65 percent of UNC Air’s costs were for medical flights. A service created to expand health care access in North Carolina has expanded into a perk for top officials and coaches funded by student tuition payments and taxpayer money. 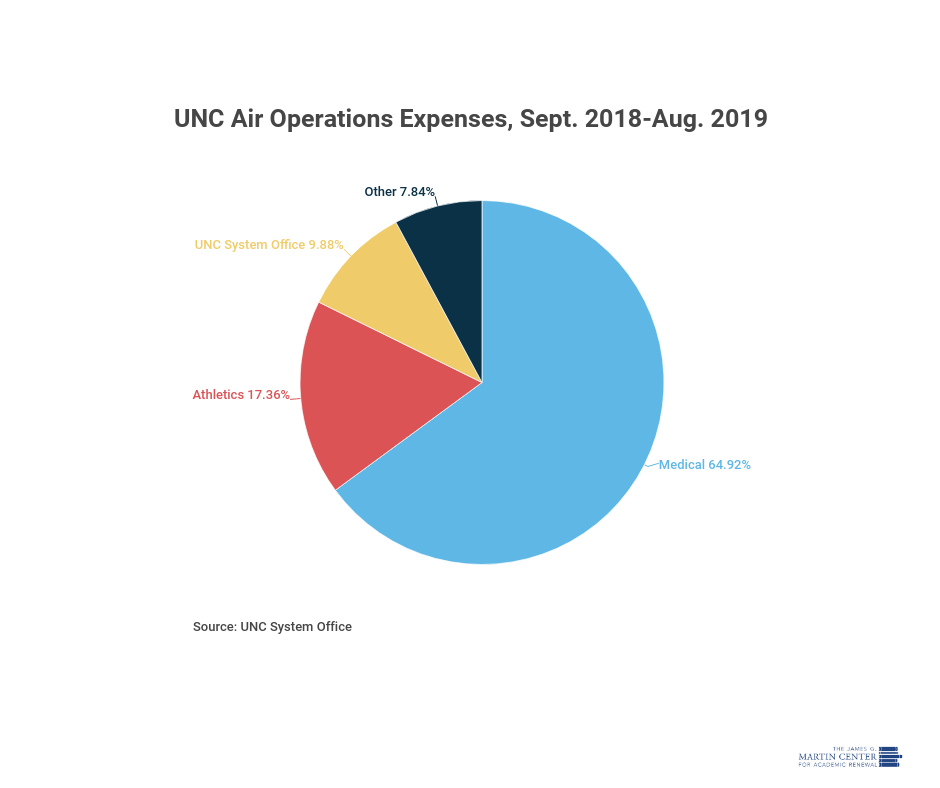 UNC isn’t unique in using private planes for athletics purposes. As ESPN reported in August, at least 20 public universities own small planes for school business and many others use charter flights hired through a private service.

UNC Air has four planes and four pilots, Alan Wolf, news director for UNC Health Care, said in an email. Administratively, it falls under the North Carolina Area Health Education Centers program. “Since the NC AHEC program started, the planes have been available for university business, including athletics,” Wolf said.

And those planes are used often. In flight logs, football coach Mack Brown and former women’s basketball coach Sylvia Hatchell were among the most common names listed. Brown took at least 22 flights while Hatchell, who resigned in April, caught 17.

Brown and Hatchell took trips to Cincinnati, Ohio; Pensacola and Jacksonville, Florida; Chicago, Illinois; and Washington, DC. Their flights came with a premium price tag: A flight Hatchell took in January 2019 to Baltimore cost $1,360 round-trip. A Cincinnati flight in October 2018 was $2,240 round-trip. Despite many commercial options, the athletics department opted for private flights.

Coaches didn’t only fly to far-flung cities, however. Brown flew to cities in North Carolina within 150 miles, saving time but driving up costs. Public records show flights to Wilmington, Greenville, Pikeville (near Goldsboro), Winston-Salem, Charlotte, and Fayetteville—which is a 90-minute drive from Raleigh. At least 18 flights were to cities in North Carolina, eight of them to Charlotte.

Brown’s roundtrip flight from Raleigh to Fayetteville in January 2019 was $480. Another January 2019 flight to Charlotte was $560. In-state trips per passenger, according to invoices, could cost $800 or more.

“Many Division I universities use private flights to recruit, and UNC Air Operations is an important tool to help us find, visit and ultimately sign great students,” Robbi Evans, the associate athletic director for strategic communications at UNC, said in an email.

Evans isn’t wrong, either. “Universities often use planes for athletic recruiting, mostly football and basketball, and to shuttle administrators on trips to woo donors or lobby lawmakers,” ESPN noted. UNC isn’t an outlier in its use of private flights.

To officials, the cost is worth the time saved. “It’s much quicker to fly to those destinations than to drive,” Evans said. “In some scenarios, a coach might be trying to fit a recruiting trip around practice—or may need to get to multiple cities in one day.”

The flight logs reviewed by the Martin Center, however, were rarely for multi-city trips. Brown had a few hectic days, such as January 28, 2019, when he flew from Raleigh to Elizabeth City and Rocky Mount, then back to Raleigh. But most flights were one-city stops.

And with such large coaching staffs—14 coaches and advisors for football and 10 for women’s basketball—a few missed practices might not be a disaster.

Men’s basketball is conspicuously absent in UNC Air’s records. That might be due to donor aircraft. One February 2019 invoice noted that a donor lent their private plane to UNC athletics, but it’s unclear how often donor aircraft are used.

“Football and men’s basketball coaches have used other private flights through donations,” Evans said. But because those donations go through the Rams Club, the private athletic booster club, they are not legally required to say how often donor flights have been used. “Those numbers are not publicly available,” he said.

UNC’s defense of its private flights is similar to most colleges. When journalist Lucas Daprile looked at the University of South Carolina’s private plane use for The State, he found that the school had spent almost $2 million over the last five years for private flights, usually for fundraising and athletic recruiting. A spokesman for USC told him that the flights are “the most efficient use of staff time…It helps us raise money. It helps us get grant funding.”

UNC administrators didn’t take as many flights as the athletics department, but they generally used them when it was convenient. UNC system president William Roper and chief of staff Chris McClure took flights, as did UNC chancellor Kevin Guskiewicz, former system president Margaret Spellings, and former UNC chancellor Carol Folt. Administrators also used UNC Air to reach cities within a two-hour drive of Raleigh, such as Washington, Greenville, Pembroke, and Fayetteville.

Generally, UNC officials returned to Raleigh immediately after a meeting or event. However, multi-city trips were slightly more common to smaller cities, such as a March 2019 flight to Wilmington and Washington, North Carolina before returning to Raleigh, and a November 2018 trip to Elizabeth City and Pembroke.

Had UNC officials driven to nearby cities or taken commercial flights just a few times every year, they could have saved thousands of dollars.

UNC Air’s passenger eligibility policy requires passengers to be traveling on university, AHEC, or state business. While that policy might limit officials from taking a plane for private use, it does little to stop them from taking short, expensive flights. Thus, when top officials can use private flights for university business without restriction, finding reasons to fly becomes more likely.

Athletic success, however, can distract from more important goals such as academic success or an affordable education. Moreover, a program founded to improve health care quality across North Carolina looks as if its mission has expanded beyond medicine to include sports and administrative travel. Even for medical-related flights, it seems UNC Health Care board members overuse planes.

Were the Board of Governors to exercise its oversight powers, perhaps they could ensure the UNC system serves as a wise steward of the money given by North Carolina’s citizens and students.