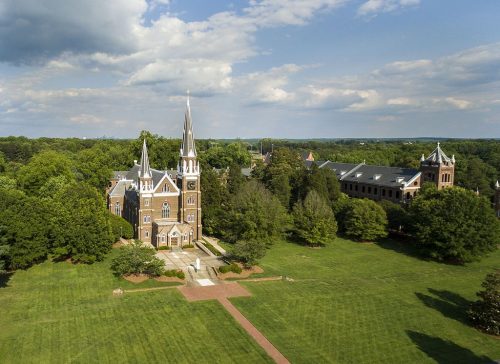 In the past few years, large public universities have garnered headlines by freezing tuition. Purdue University, the Pennsylvania State System, and every public four-year university in Virginia have all frozen tuition and fees. And three University of North Carolina schools—UNC Pembroke, Western Carolina University, and Elizabeth City State University—have cut tuition to $500 per semester for in-state students. That reduction is a boon to students and parents who must foot the tuition bill. But it is made easier by taxpayer subsidies; state universities aren’t entirely tuition-dependent for their revenues.

Small private universities often find it more difficult to keep tuition down, but it can be done. Belmont Abbey College in North Carolina is one example. Belmont Abbey cut tuition 33 percent in 2013-2014, to $18,500, where it has stayed for six years. In an interview with the Martin Center, Belmont Abbey president Bill Thierfelder and CFO Allan Mark explained how and why they made such a dramatic change.

Thierfelder and his team considered cutting tuition for the school’s traditional program in 2004 as well but found that other small private schools that had tried to do so had failed.

“It’s the Chivas Regal effect,” he said. People often associate higher tuition costs with a better standard of education, even if that’s not the case. But after the recession, parents and students starting looking for universities that were less expensive. Now, Thierfelder says, “65 percent of the market stops looking at schools with a sticker price above $24,000.” It gave the school an opening—an opportunity to lower tuition without being hurt by it.

The plan worked. Belmont Abbey saw its revenues actually increase in the first year after the tuition cut. The increase allowed the school to start an Honors College and offer Honors College Scholarships. It also provides institutional aid to more than 90 percent of its students. At the same time, students are borrowing less. According to Thierfelder, it’s a form of good stewardship—for the students and for the college.

The school has always paid careful attention to its expenditures. “General administration is very lean,” Thierfelder said. “We don’t have layers. We just have very hardworking people who believe in our mission and vision.”

Thierfelder also noted that many colleges and universities are in debt because of their buildings. “We are different,” he said. “Very cautious about expansion. We refurbish, expand, reuse. We are keeping things up to date, but we won’t overspend on it. We’re very careful about the financing. And always looking at the bottom line.”

Enrollment has also increased since the cut. This year’s freshman class was the school’s largest-ever at 430. Ideally, Thierfelder said, enrollment will grow to somewhere between 1,800 and 2,200. That size will allow Belmont Abbey to remain personal but also offer students more options.

“Our students leave with Aristotelian friendships. We don’t want to lose that,” Thierfelder said.

Those friendships are just one part of what makes Belmont Abbey special. And one reason that Thierfelder believes the school will be able to weather the coming demographic decline.

Belmont Abbey differentiates itself from many universities today that give students almost unlimited choice—with little direction. It focuses on the kind of education that prepares students to “lead a good life.”

“Foundationally, we believe in seeking the truth, wherever that is found—sciences, humanities,” Thierfelder explained. Belmont Abbey professors teach students to “think, reason, follow the truth.”

But that’s not all. “Getting a technical education is good, but does not teach you to live a good life. The ability to make a living and provide for yourself and your family is important, but not enough,” Thierfelder said. Belmont Abbey includes moral formation in its mission. “It’s more than just the intellectual,” he explained. “It’s body, mind, and soul.”

Belmont Abbey believes its plan will continue to attract students even as the market shrinks. “The challenge for all small liberal arts schools is to be true to your mission and responsive to the marketplace,” Thierfelder says. “If your mission isn’t noble, honorable, and worthy, you probably won’t make it. If you just offer a generic product, you won’t survive. Small, personal liberal arts colleges must inspire, compel, draw people in. That’s what we do.”